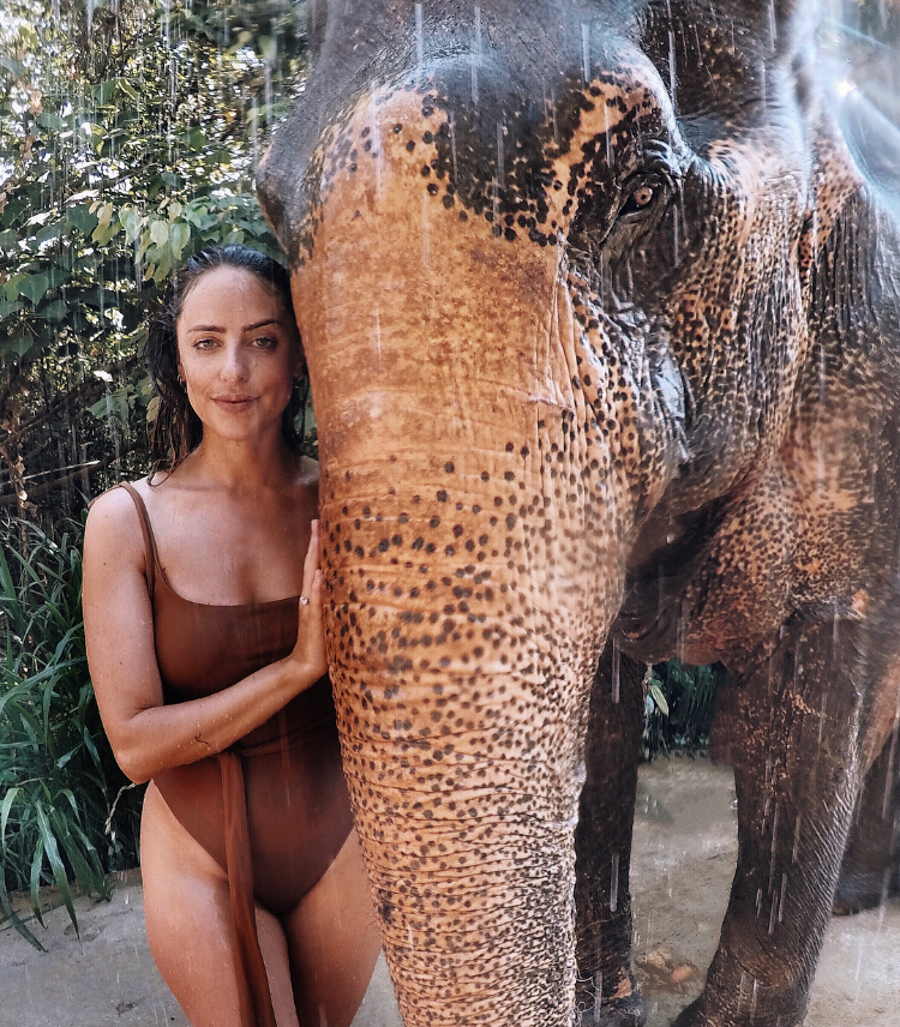 The Phuket Elephant Sanctuary, my honest review of a place that sadly sunk my heart.

I traveled to Thailand last month on a fully recreational break with my gorgeous friend Nicole. It was Nicole’s very first time in Thailand but for me it was my fourth visit to the beautiful country. Thailand has been a desirable go-to destination for me in the last few years as it guarantees me a real ‘break’ without breaking the bank. It’s such an affordable paradise location and after spending a few weeks at a retreat in Koh Lipe Nicole and I headed back to the base city we flew into, Phuket.

Thailand has many amazing qualities as a country, beautiful beaches, delicious cuisine, amazing fresh fruits, warm weather, friendly locals and massages that cost less than a Starbucks! It does as a country however, sadly lack in morals when it comes to the welfare of wild animals. It’s one of the worst countries in the world for capturing, ‘training’ and forcing what should be wild animals into domesticated pets and ‘show things’.

The worst of these cases are in Phuket. The city is inundated with tourists every year and tourism is by far the largest source of income for the locals. There are a number of ‘attractions’ that use and abuse animals to make money from ignorant (sometimes through no fault of their own) Westerners including Tiger Kingdom and the Fantasea Show. They even use live birds in the Ping Pong shows, it’s horrendous.  A terrifying reality that you really can’t avoid when staying in Phuket. You do however have a choice as to whether you participate or enable these organisations that are mistreating animals. Though, it might not be as easy to determine as you may first think.

A few years ago I traveled to Chang Mai to the Elephant Sanctuary there, at the time it was one of the only sanctuaries in Thailand and my friend Aimee and I had the most heart warming experience of spending the day with rehabilitated and rescued elephants. I wrote all about my experience here. To this day I still value the experience as one of the best animal encounters I’ve had and both Aimee and I left the sanctuary having learned the cruelty behind how these elephants were once treated and we have both since spread the word about how as humans we must not ride elephants. 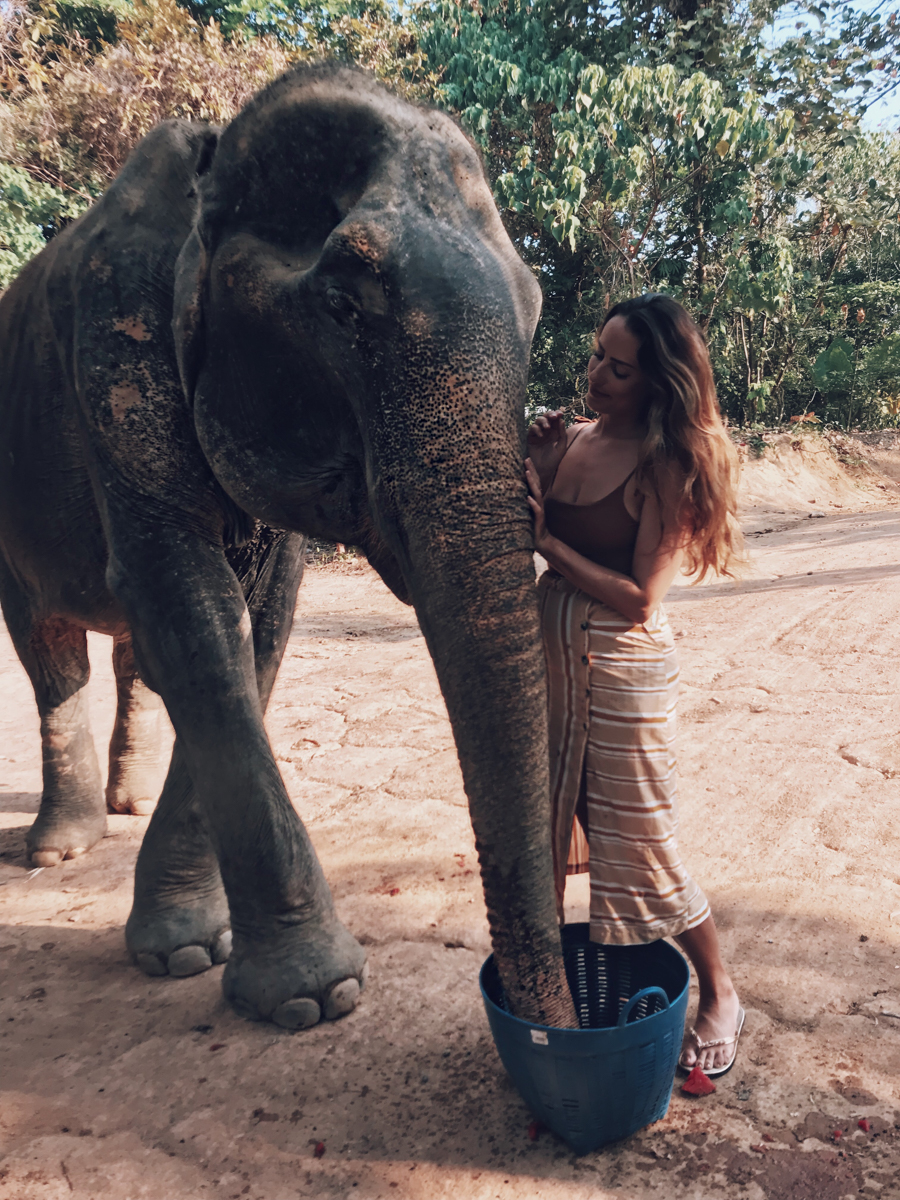 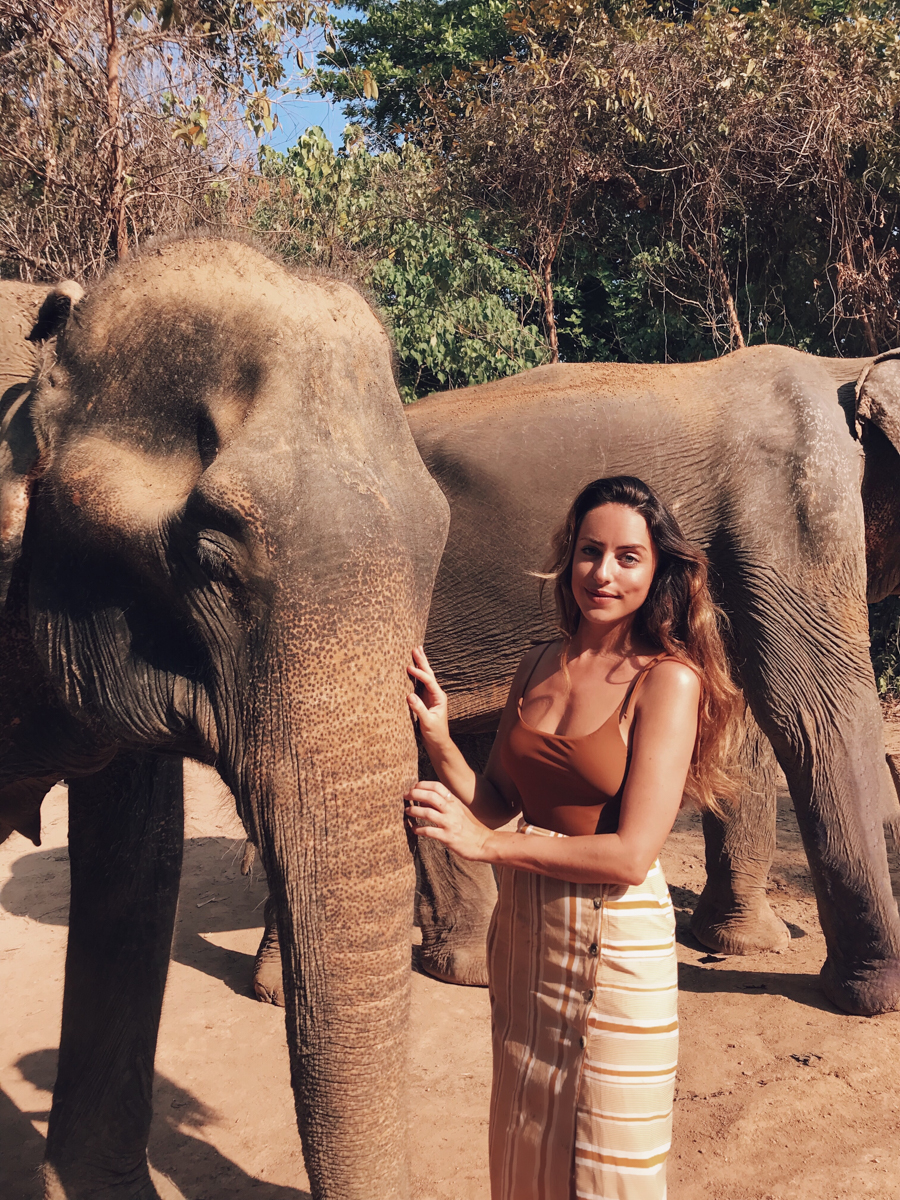 Back in Thailand, having read this blog post of mine years before Nicole was keen to have the same experience I had once been treated and in reading up about the Phuket Jungle Sanctuary Nicole was lead to believe that is was connected to one I visited in Chang Mai we decided to book in for a half day experience.

Sadly, this experience was so far removed from the one I had just a few years prior. From the moment we arrived on site we felt uneasy and the feeling just continued to get worse and worse as the day went on. The camp was extremely small in size and the elephants though ‘roaming freely’ barely had room to stretch their legs. We were given a short speech by the ‘sanctuary’ manager who simply explained to us the difference between Asian and African Elephants, told us how expensive they were to buy, offered out a free T-shirt and asked us all to pose for a picture for their Facebook page.

There was absolutely no heart felt breakdown as to just how badly these elephants had been treated, no reasoning as to why it’s wrong to ride them (watch why here) just a small briefing about how to feed them. Looking around at the 50 or so people in our group I was devastated to think that these people would leave the place completely none-the-wiser about the horrifying process of spirit breaking these elephants have to go through to be in this position.

After being ‘briefed’ and the camp leader making a few jokes about the elephants personalities (jokes which were extremely distasteful in my opinion!) we, as a group went to feed the elephants. Unlike the huge space and length walk in Chang Mai, the area in which we fed the elephants was no bigger than a netball pitch. There were far too many people to match a kind ratio of the elephants but it was, of course a wonderful experience for everyone to be so up close and personal to the amazing creatures. After feeding the elephants were lead (or their ears were pulled to make them lead) towards a big mud bath and all guests were able to clamber into the pit and wash them with brushes and buckets.

The elephants and guests, myself and Nicole included were then showered down as a collective and that was the end of the experience. 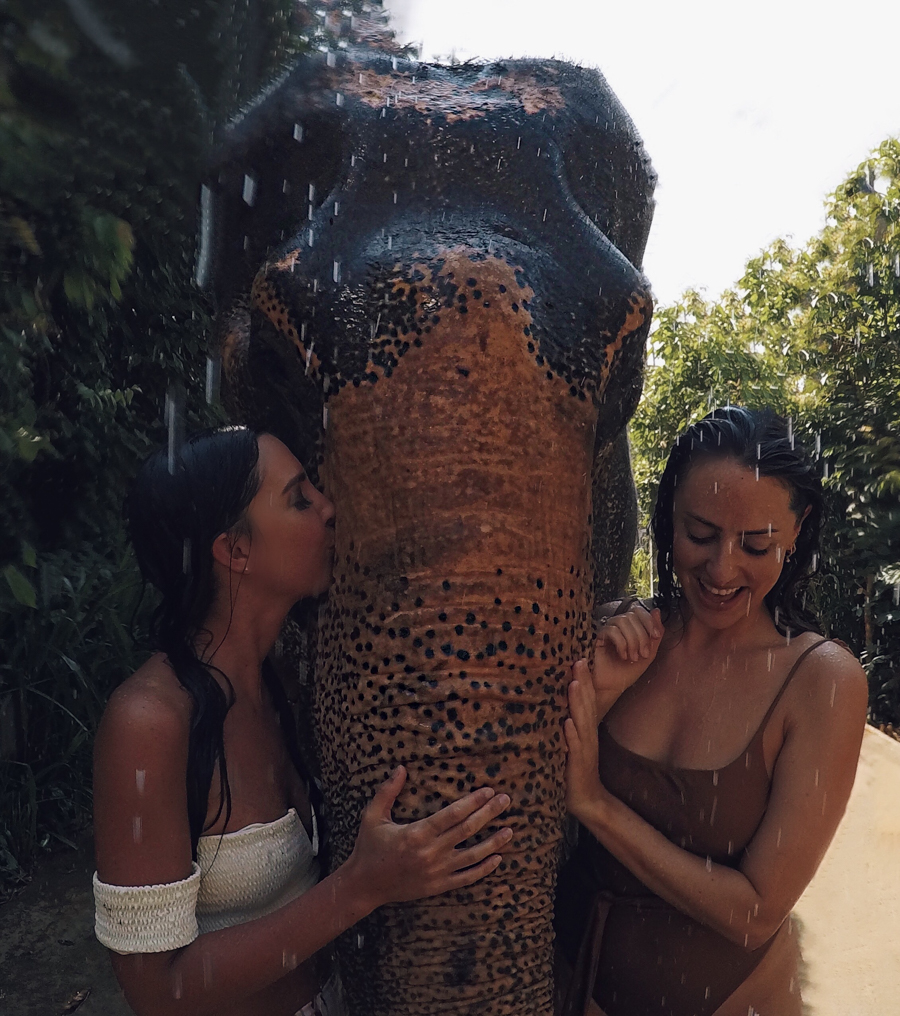 Now. These elephants were rescued by the sanctuary no doubt. Most of them from performing in the circus and all of them at an old age BUT though they weren’t being treated badly or captured in the same horrific sense as their previous lives, I couldn’t help but feel as though they had been traded in from one tourism trade to fuel another.

The experience I had in Chang Mai was enlightening, caring and kind. I felt amazing whilst there and even after I had left the sanctuary but the camp in Phuket was such a far cry from that feeling. In Chang Mai the elephants were roaming through such a huge expanse of land and the volunteers would barely raise their voice to them let along nudge them or pull their ears. They were under no obligation to ‘perform’ for the visitors and there was only one group allowed on site per day so for the rest of the day they were just living their best lives as they pleased.

In Phuket, they have a morning group and an afternoon group so the elephants are constantly around masses of people and being moved from one spot to another in this tiny space they call a sanctuary. It is, of course, amazing that this organisation has rescued the elephants from performing but I can’t help but think back on the day with a sour taste in my mouth. It just seems to me as though this is a far easier way to make money from the elephants than having them perform in a circus or barter with people to ride them. It’s a sad tale that these elephants were once broken down and their souls damaged so much that they’ve lost all their natural animal instincts but to market yourself as a business that cares deeply about the elephants I think there is so much more that can be done.

The elephants are no longer being beaten or kept in cages but they are essentially still slaves to the humans and whilst there is no way to be able to release them back in the wild I’m not saying that this is necessarily wrong it just makes my heart ache that this particular camp is not educating the people who visit as to the true depth of horrors that these poor elephants have gone through.

It was, all the while, an amazing experience to be able to interact with the elephants but it really shouldn’t be the case anywhere in the world. Elephants should be wild animals not domesticated but for those that have already gone through the trauma at least they are being fed and bathed twice daily and the people that have come to visit them are truly in awe of their beauty rather than using them as a mode of transport or a gimmick. 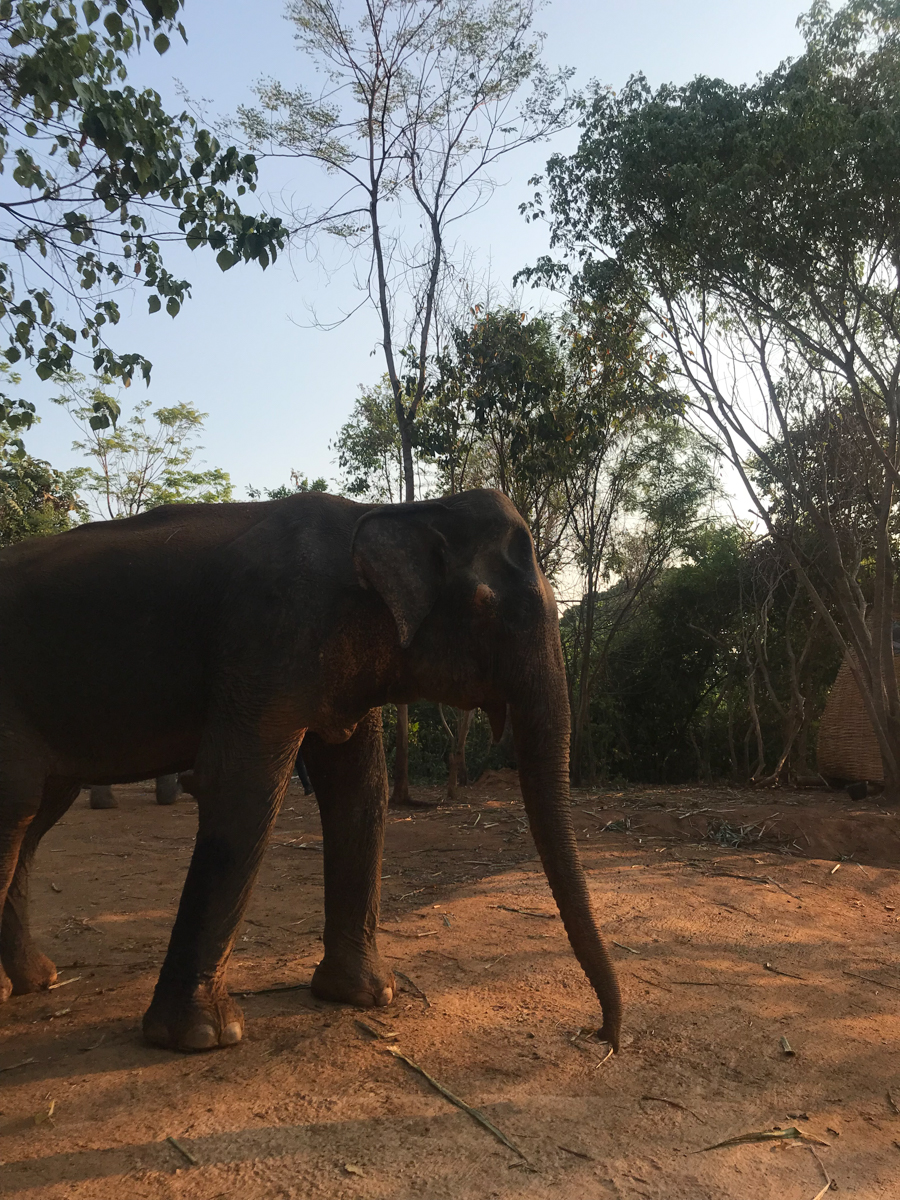 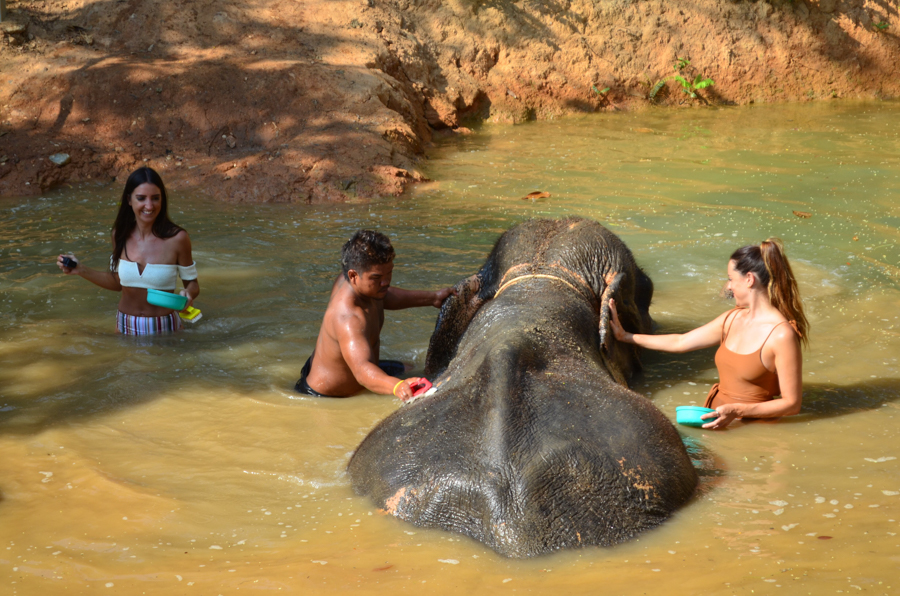 It would be amazing if they could increase the size of the camp or lesson the amount of people who visit on a daily basis but the main thing for me was the education to the guests as to why it is so important not to ride elephants in the hopes that one day there will be no need for sanctuaries like these at all.

It turns out that The Elephant Jungle Sanctuary in Chang Mai is completely different to the Nature Park that I visited and it angers me that a company is utilizing a caring and change-championing organization to simply make money. Or so it seemed to me anyway.