This picture, is exactly what you should see when someone tells you they swan with a whale shark. They should be behind or to the side of the whale shark, at least 3m away and the whale shark should not be at a 45 degree angle upwards towards the surface. Having an online platform, no matter how big or small in my opinion comes with a moral responsibility and as you by now may know, I am especially passionate about the welfare of wild and endangered species and the importance of protecting our marine life.

With this in mind, after recently snorkelling with wild whale sharks in The Maldives I wanted to dedicate an article to these beautiful and majestic creatures and highlight a few home truths you may have seen over the past few years on social media. 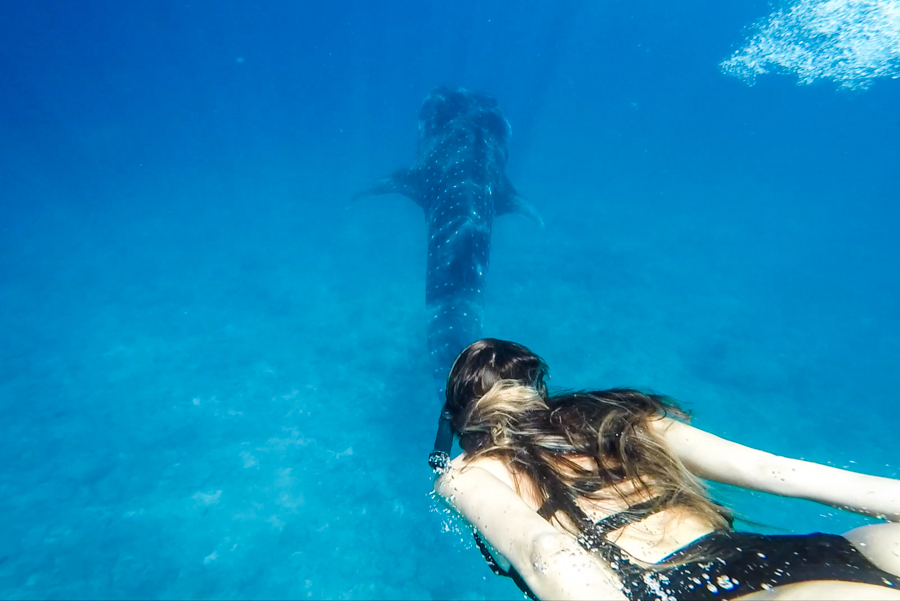 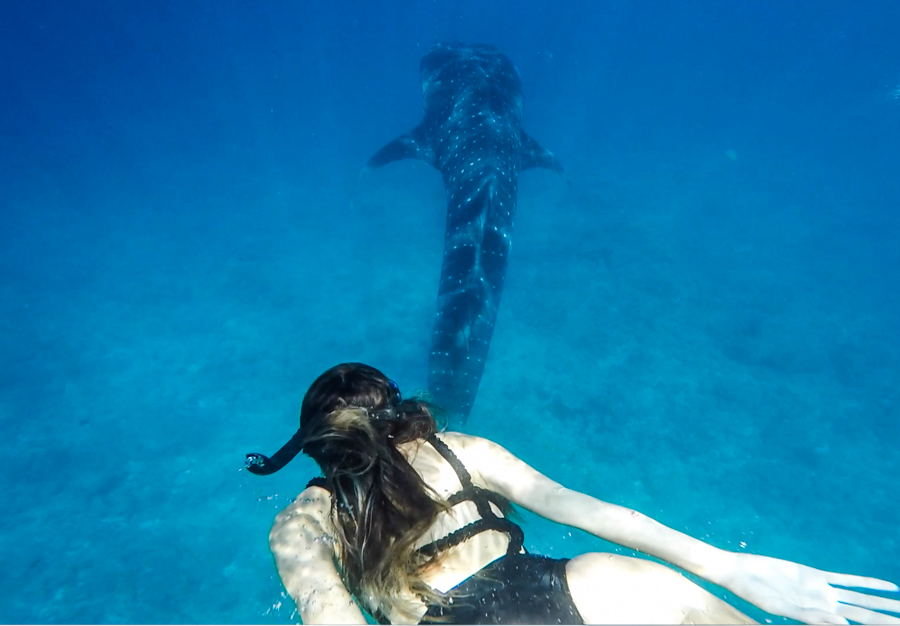 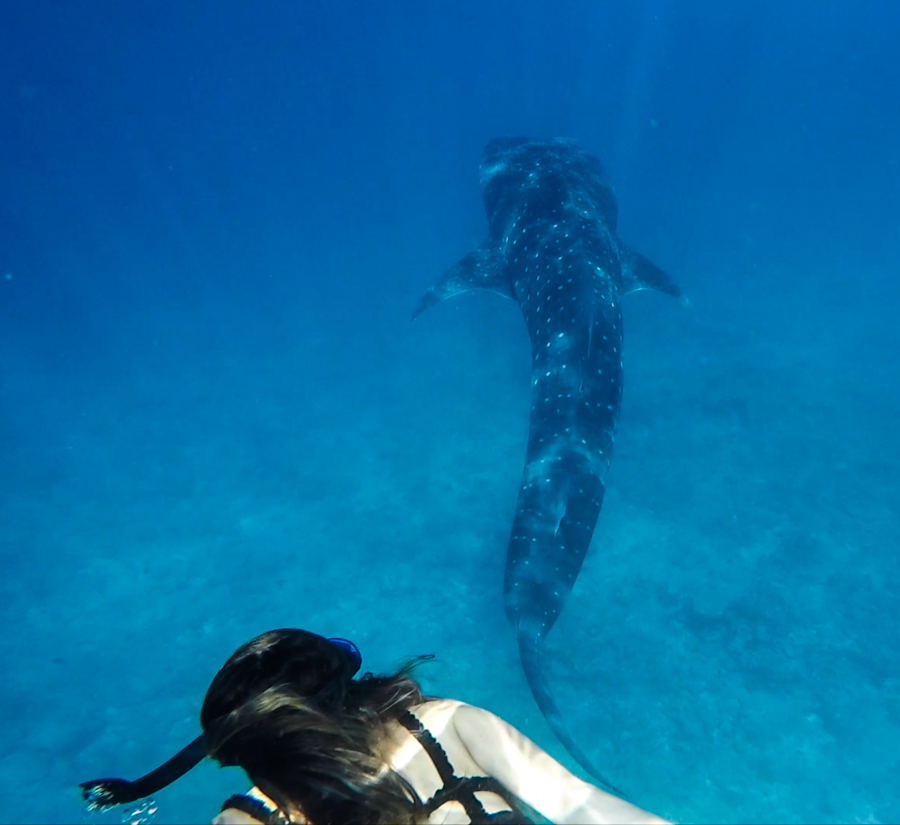 Whale sharks are the largest fish in the world, they are a member of the shark family but for me they are best described as the gentle giant of the sea. They glide through the waters beautifully and despite their sheer size they are the most docile and serene marine life I have ever seen.

I encountered these majestic creatures whilst on a Whale Shark Safari with The Conrad Maldives last week. Whale Sharks are super hard to find, in fact I have been on half a dozen safaris before now and had never been lucky enough to see one. They are first of all incredibly rare and they have specific migration patterns so encountering one really is, a once in a lifetime experience.

When searching for the whale sharks we took the boat out to their familiar area and simply waited for our skippers to spot a shadow on the surface of the ocean. When  we were lucky enough to see one (as you’ll have already gauged by these pictures!) we had just moments to fin up and jump in before they took to deeper waters. It’s an exhilarating few minutes and by the time you jump into the water your heart is racing faster than if you’ve just run a mile! In stark contrast, as soon as you see the Whale Shark gliding through the waters you are instantly soothed into a calming state, I have honestly never felt more ‘zen’ than when swimming with one. Their sheer size and beauty is breathtaking to see underwater and in all my years of diving I was never so touched by a member of the marine world swimming side by side with me.  It was an indescribable feeling that I doubt will ever be matched!

*These photos do not do the amazing whale sharks justice as they were screen shotted from a video, with wild animals there is no messing about when it comes to photography, you have to make the snap decision to video or take still pictures, my snorkelling buddies and I all opted for video! So here’s where the article turns from a dreamy mermaids tale to something a little more serious.

I have recently seen a number of instagram pictures, tweets and blog articles about swimming with the Whale Sharks in Oslob, The Phillipines and to tel you the truth, knowing what I now know, it sends chills down my spine. At this particular location the locals feed the Whale Sharks to attract them to the tourists boats so that they can then jump in and swim with them, touch them and get that infamous selfie with them.

At first glance it may seem very inviting, the opportunity to swim with these wild animals that are usually encountered on luck and luck alone. Getting that perfect picture of you swimming up close to the biggest fish in the world – I get it. However, there is so much more than meets the eye in these famous captures.

Whale Sharks are wild. They are also endangered. Feeding them is not only dangerous for the sharks themselves it also effects the entire eco-system. The food dropped into the ocean for them is not their natural food group (they usually gorge on plankton) so they are not being supplied with the natural nutrients they need and with a constant supply to lure them in for the tourists they are not continuing with their usual migration patterns.

This on top of the lack of snorkelling etiquette from tourists, jumping in and touching the whale sharks, they do not have natural defences against the bacteria humans have on our skin and therefore become very vulnerable to infections.

I have also heard (speculation only so I can not state this as fact) that some tour guides often herd the whale sharks with paddles or hold their mouths with their feet away from the boats to keep them  in place for photos, utterly disgusting! If you see a picture of the whale shark swimming upwards at a 45 degree angle, more times than not it’s because they are swimming upwards for human fed food. It’s just not right. Also if the snorkeler is not wearing fins, it’s another clue that the whale shark is not swimming! These packages that are sold to tourists to guarantee they will see a whale shark are so very dangerous and although scientists can not fully pin point how grossly it is effecting the ecosystem it really doesn’t take a professional to know not to mess with nature and the natural circles of life.

Also, to me it seems so ridiculous as they are friendly docile creatures that can be found and swam with in the wild – yes it may take you a few tries as they are wild (just like when you go on a dolphin cruise, you won’t always see them) but the rewards of finding and enjoying that precious moment with nature is worth the rewards tenfold of booking a tourist trap surely?

I do want to make a note to say that I am not condemning those who have taken the opportunity to dive in in Oslob because there is and will always be a lack of education when it comes to wild animals and the bigger picture behind THAT instagram picture. I even liked a picture of one of my friends doing it a few months ago, until I took a closer look at the image and read up on the encounter and location. Needless to say it was unliked immediately! My friend is an honest writer and I whole heartedly trust that she will write about the negatives of her encounter but I see so many people caption their pictures with false truths and deceptions and it really gets under my skin.

Working as a travel infleuncer I have flagged up a few moments and trends like this previously, you can read about why not to ride an Elephant here and I’m sure some of you will remember my famous snapchat rant about that blogger who wrote about the ‘Tiger Sanctuary’ that was in actual fact a malicious Tiger farm?!?! Don’t get me started on that!

Over and out for me on this one, please feel free to comment below if you have a different view, or if you have had your own magical encounter.