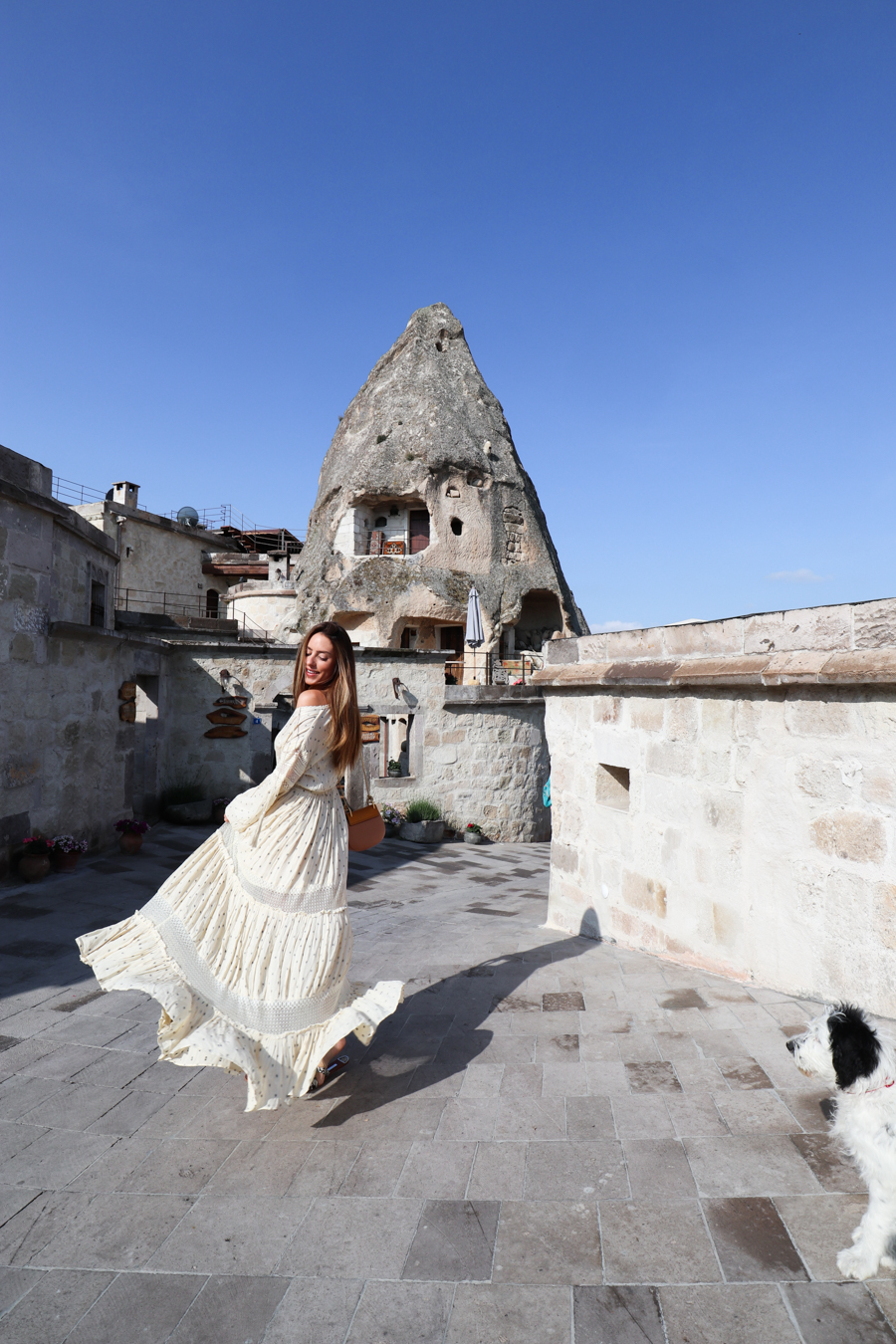 There are few hotels in the world that manage to beautifully connect modern invention with treasured ancient tradition but the Kelebek Cave Hotel in Cappadocia has managed it quite perfectly! 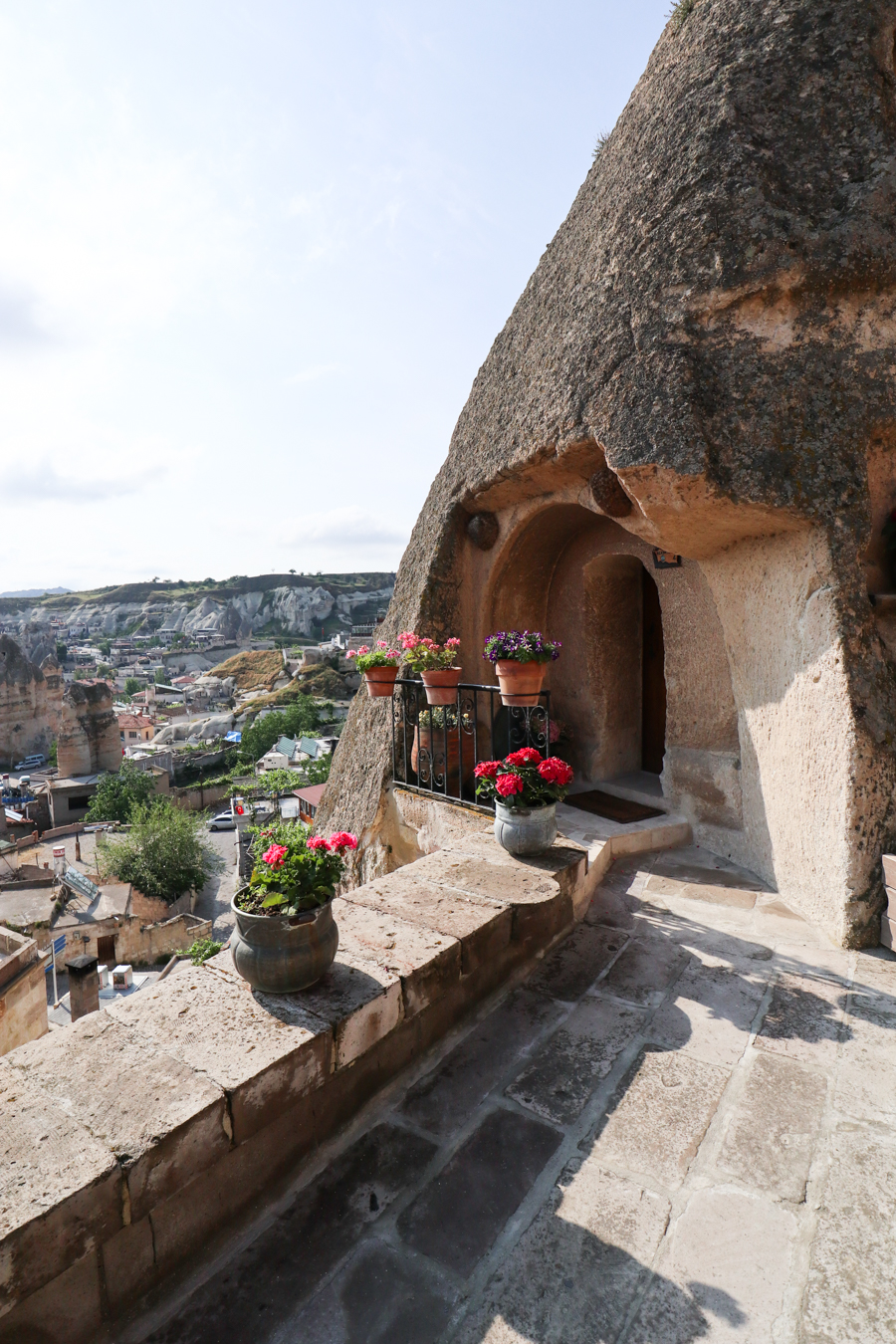 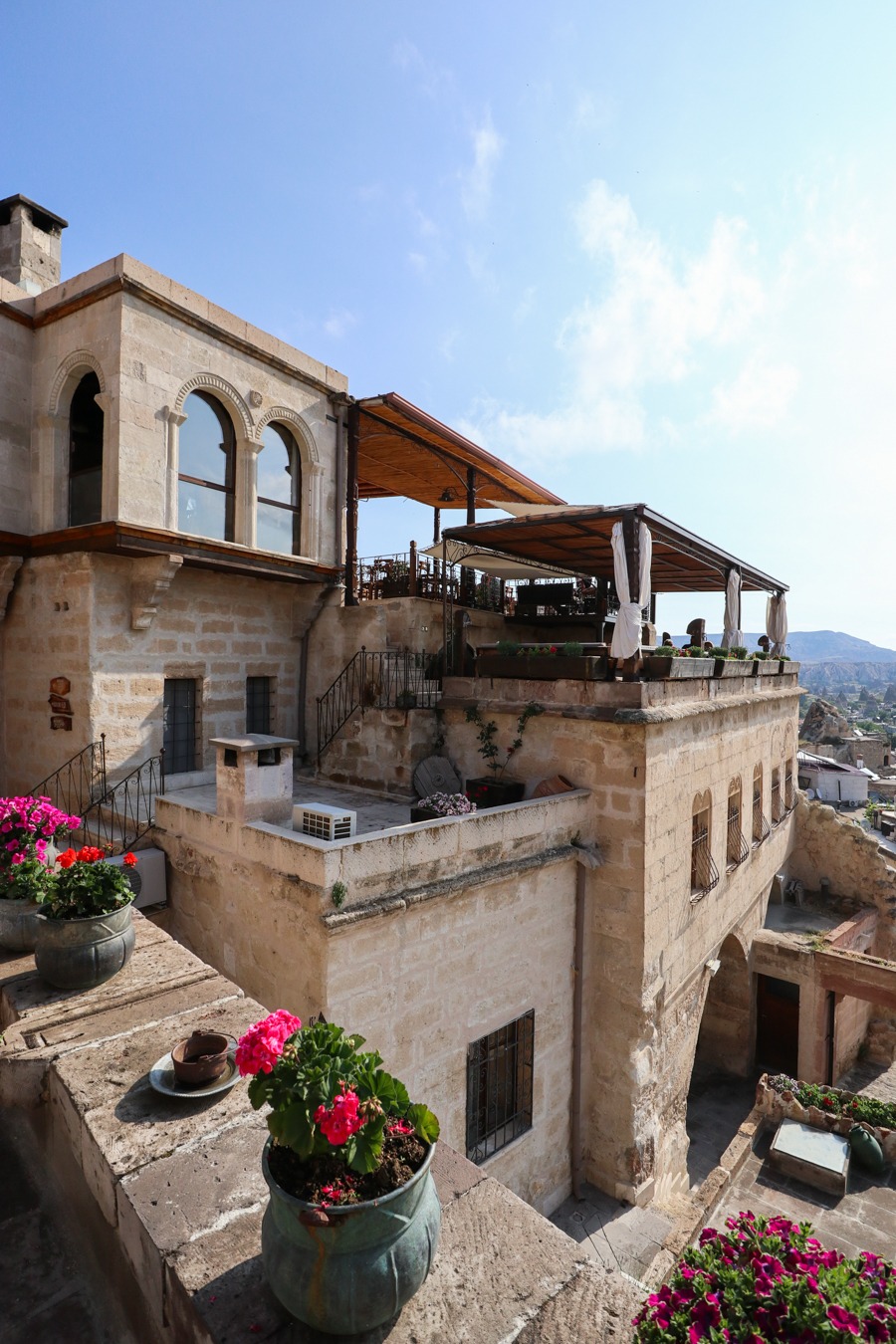 Last month I visited one of the dreamiest locations I’ve ever been to, Cappadocia. It had been on my bucket list for years after double tapping with excitement every time I saw one of the now viral images of modern day princesses standing beautifully beneath a blanket of hot air balloons above them. The whole place looked like a fairy tale and one I just had to know the real truth behind, so knowing this Mr C thought it would be the perfect trip to surprise me with for my recent birthday. He was right!

When you think of Cappadocia there’s no doubt the first thing you’ll imagine and focus on is the spectacle of hundreds of hot air balloons that take the skies every single day but actually the most intriguing and special thing for me was the moon-like scenery and uniquely formed architecture that gives you the illusion of being on a completely other planet! I’ve never known a wonderland quite like it, I felt as though I was on a film set the entire time.

When Mems decided on our weekend away to Goreme he knew that I would want to stay in a traditional cave hotel so he booked us three nights at The Kelebek Cave Hotel and it. Was. Wonderful. The boutique resort was the perfect choice for us both, there was a small swimming pool (which is always a request from me as you know!) it was perfectly located just a short walk from the main town and the team that ran the hotel were so helpful and accommodating. Our breakfast was included and it was a yummy daily spread with quite the epic view to enjoy it! 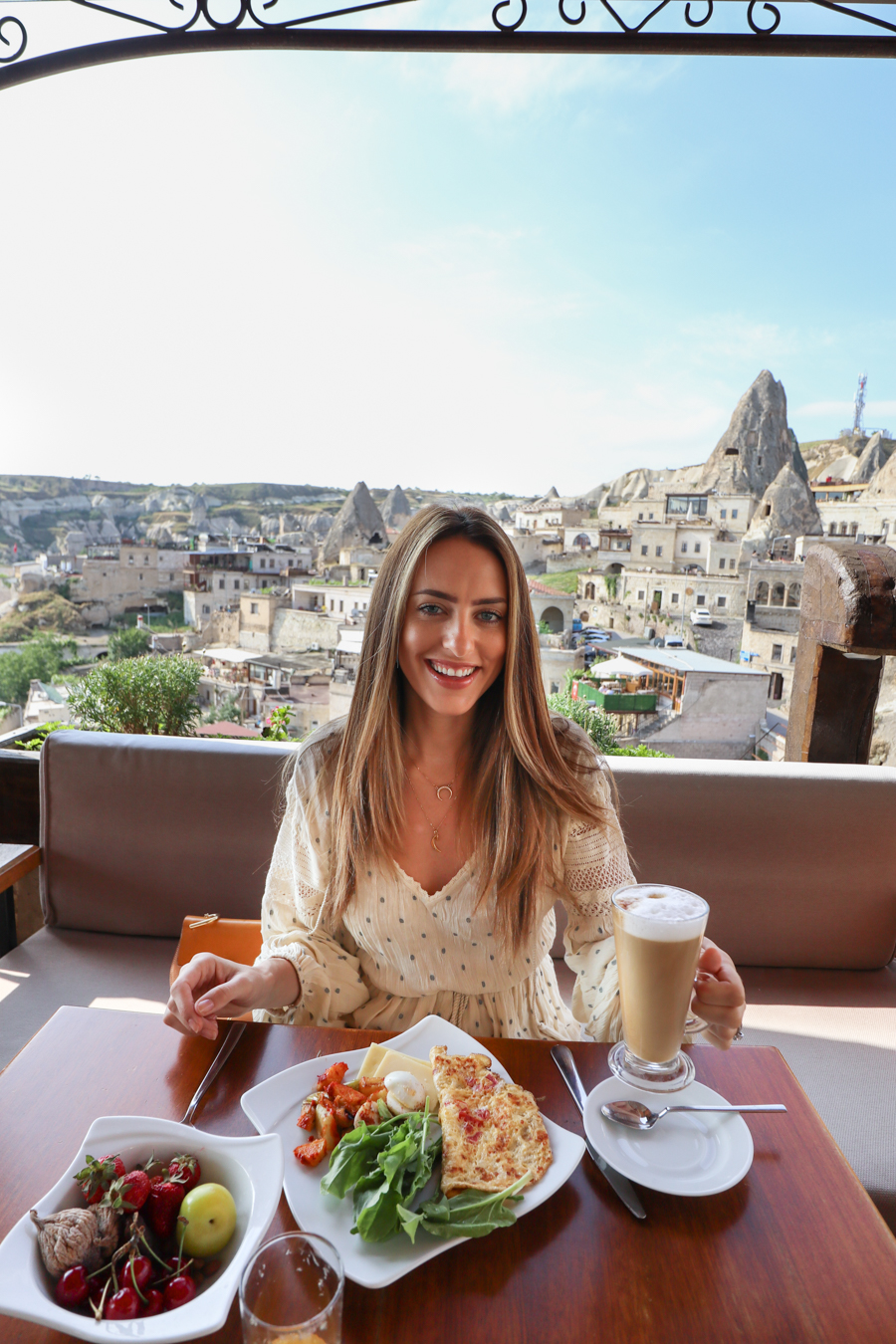 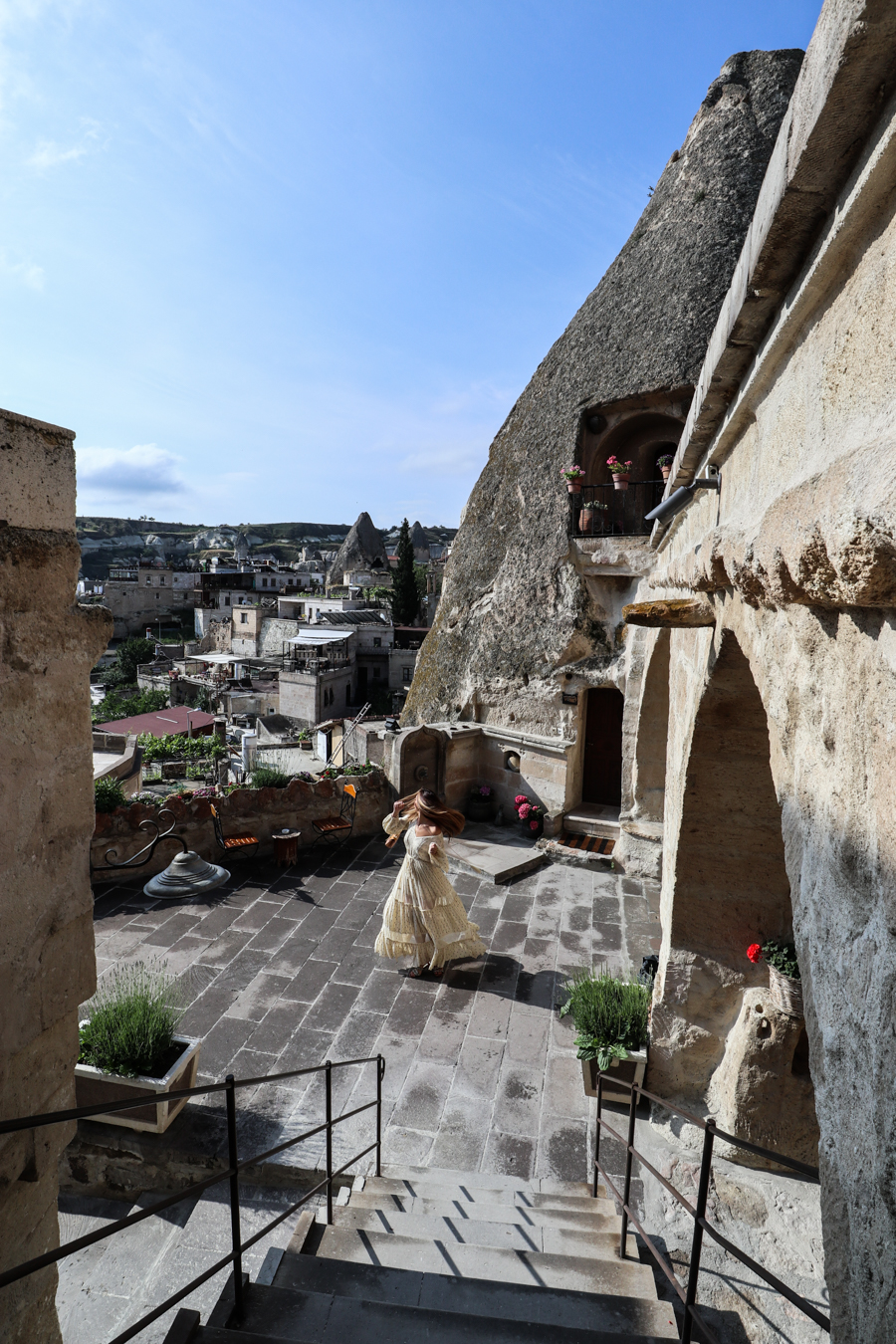 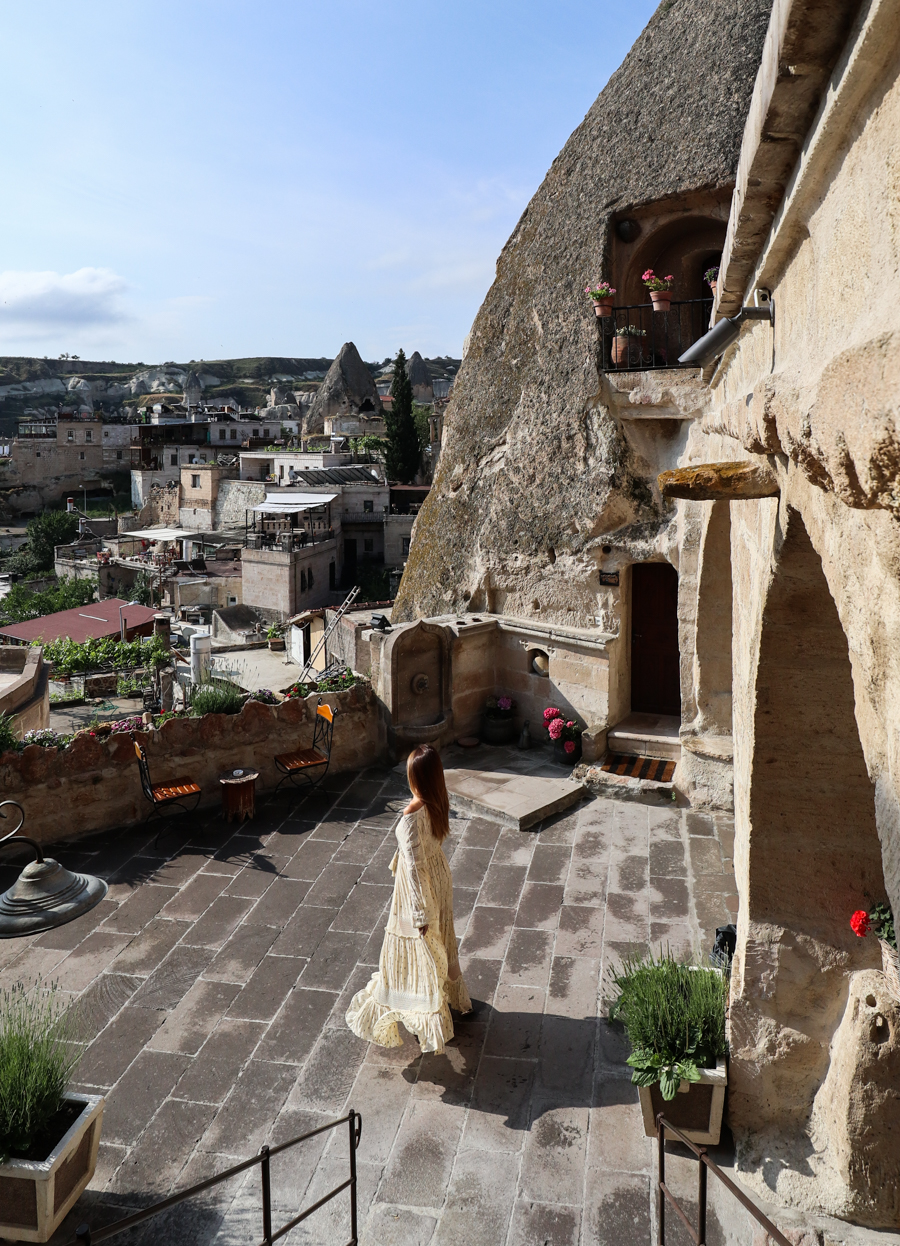 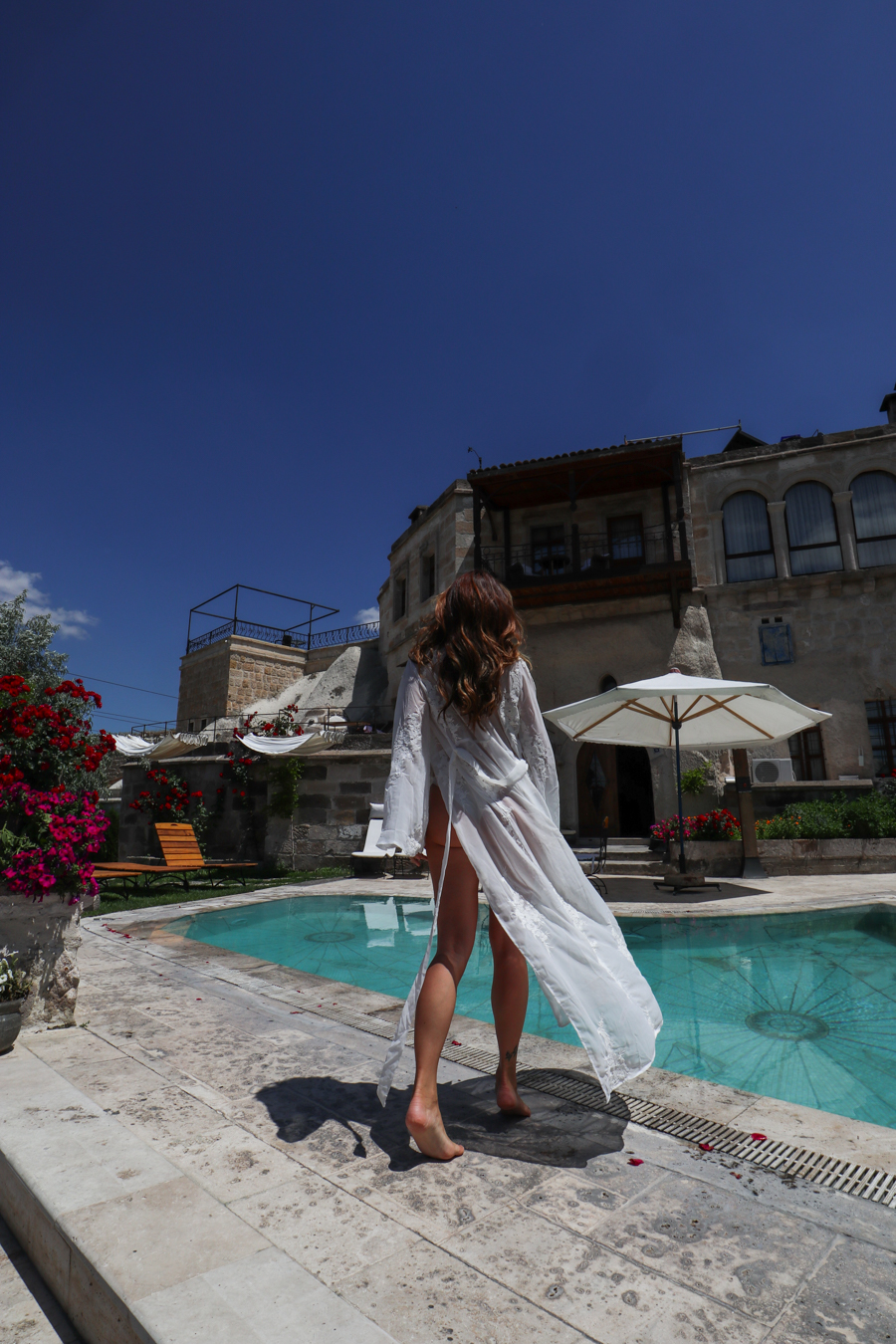 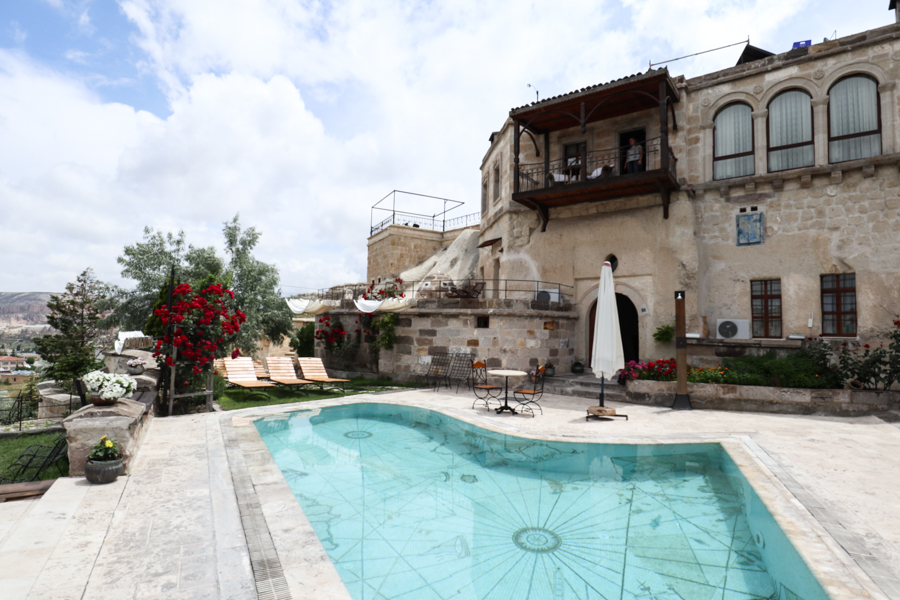 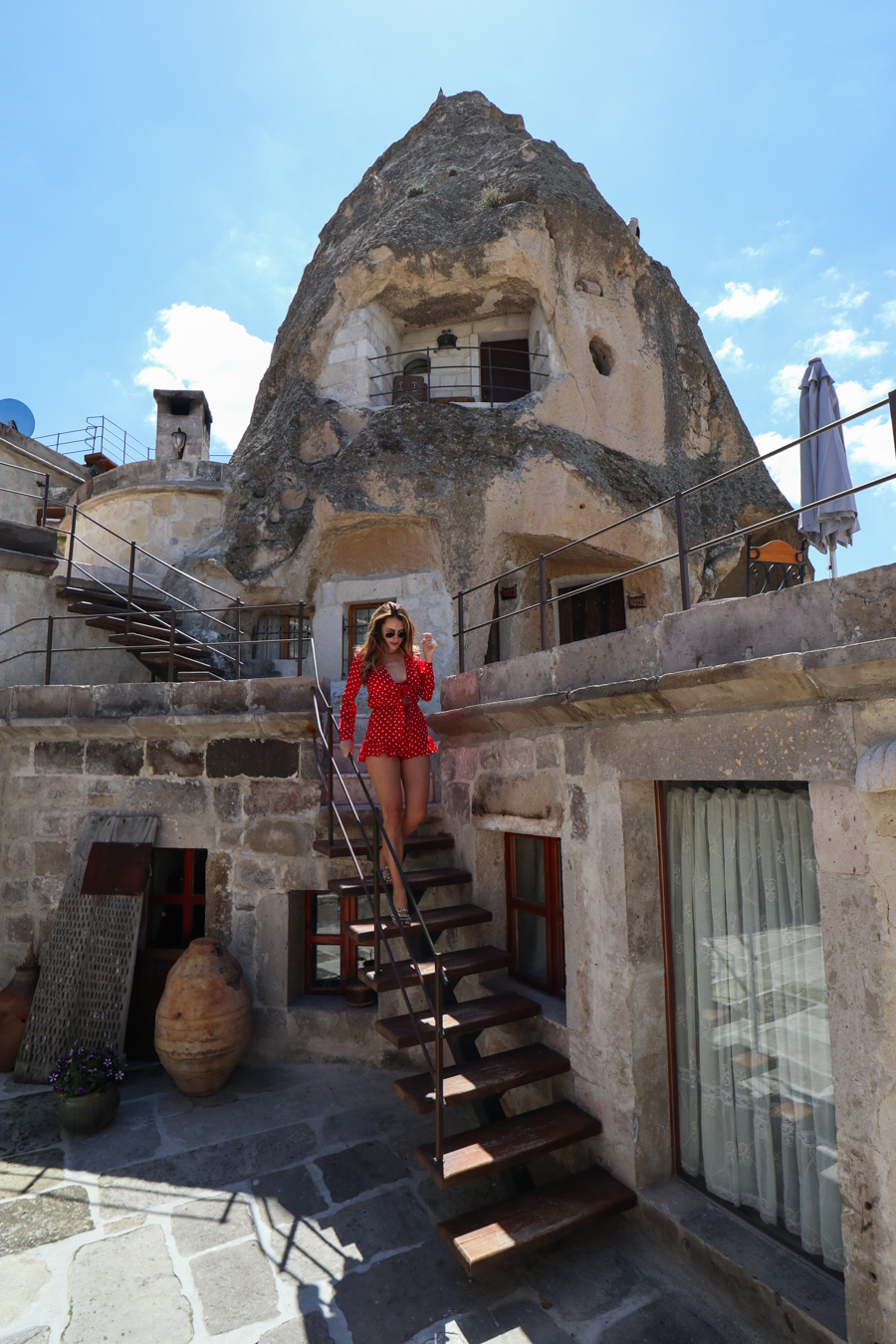 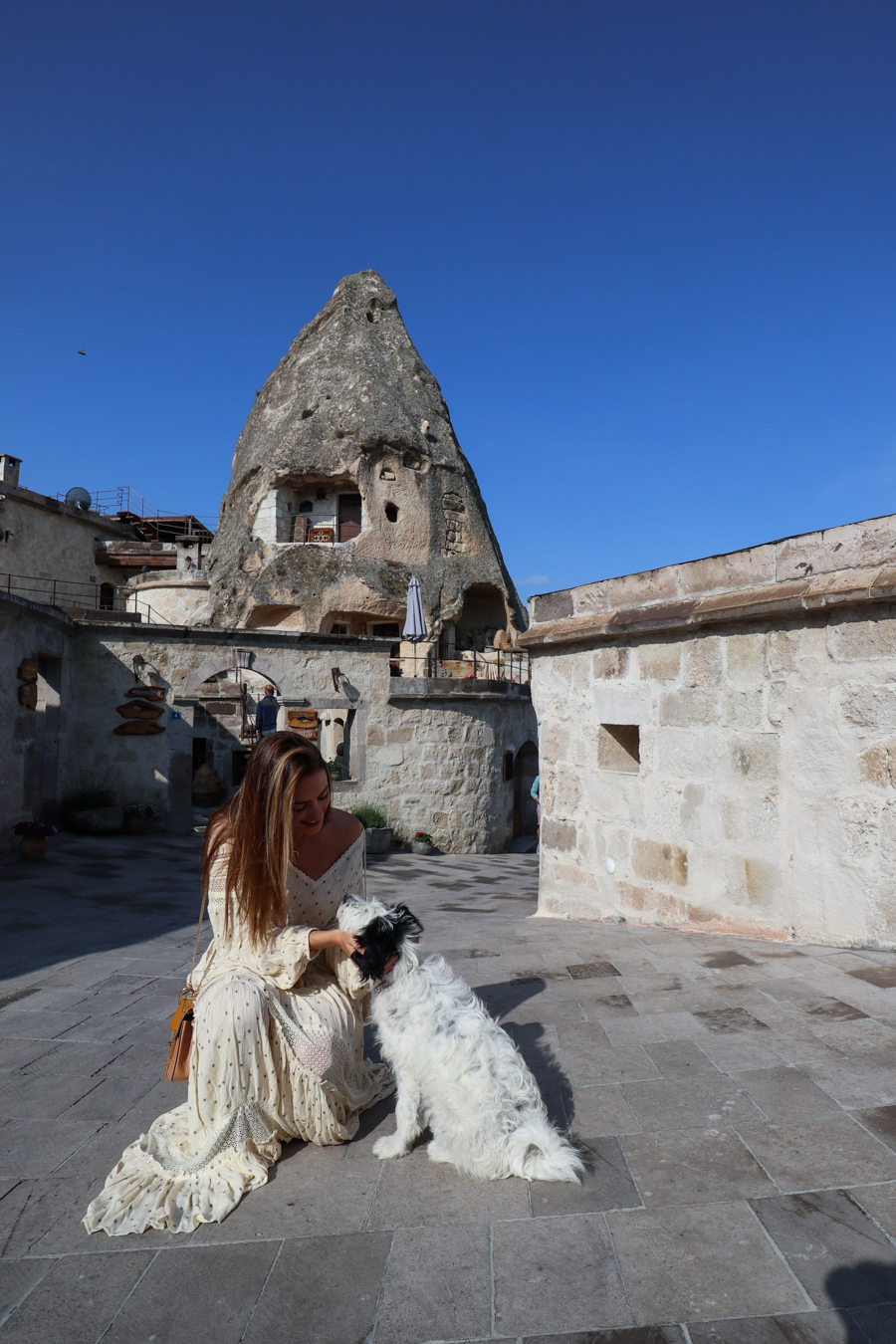 The rooms themselves at the Kelebek are what, I think, sets this hotel a part from the rest in Cappadocia. Asides from the obvious requirements for more modern fixtures and tech to suit hotel guests needs, the novel history of the ‘fairy chimneys’ are still very much in tact. There’s a sliding scale in terms of size but even the smallest cave room on offer outweighs in charm what a larger, more modern suite would do elsewhere. 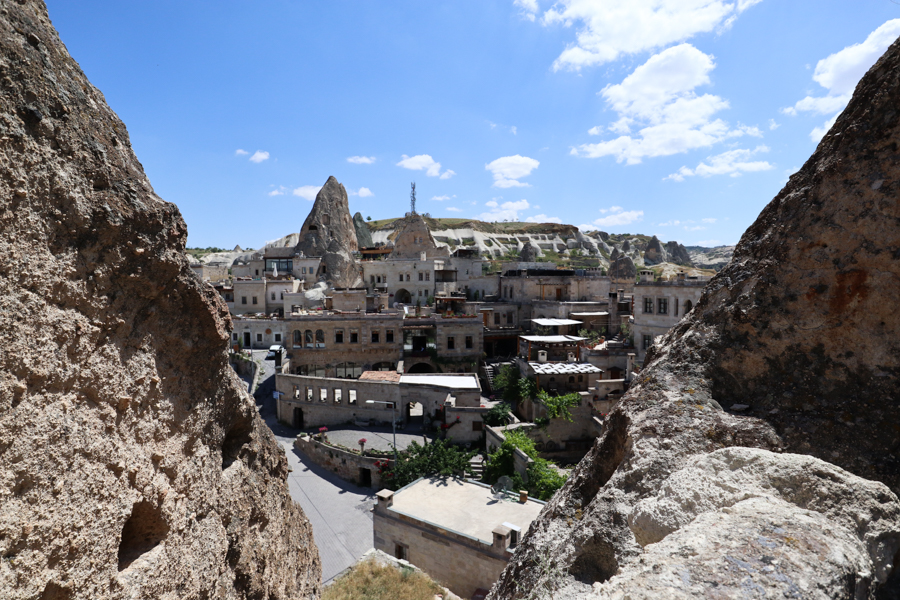 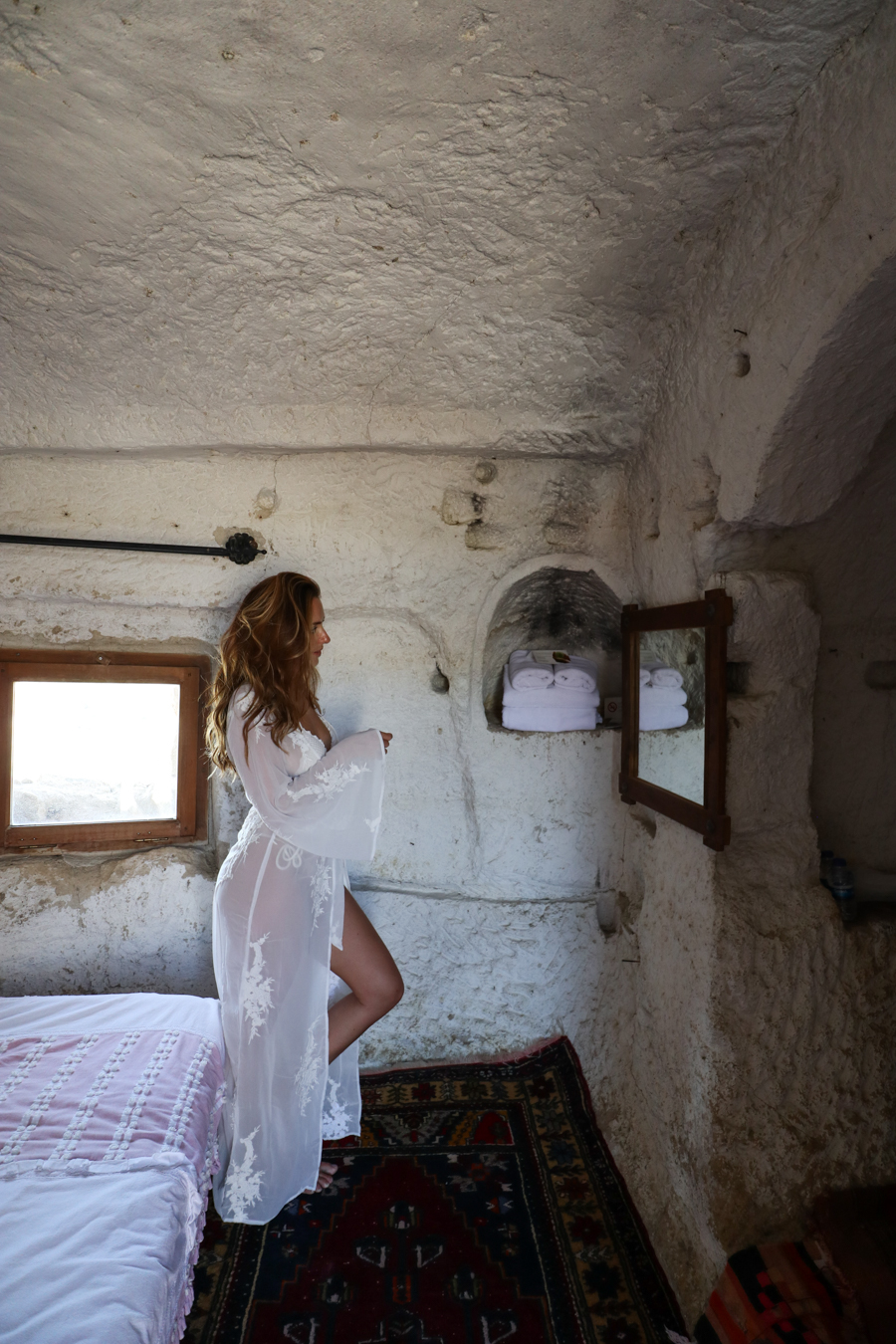 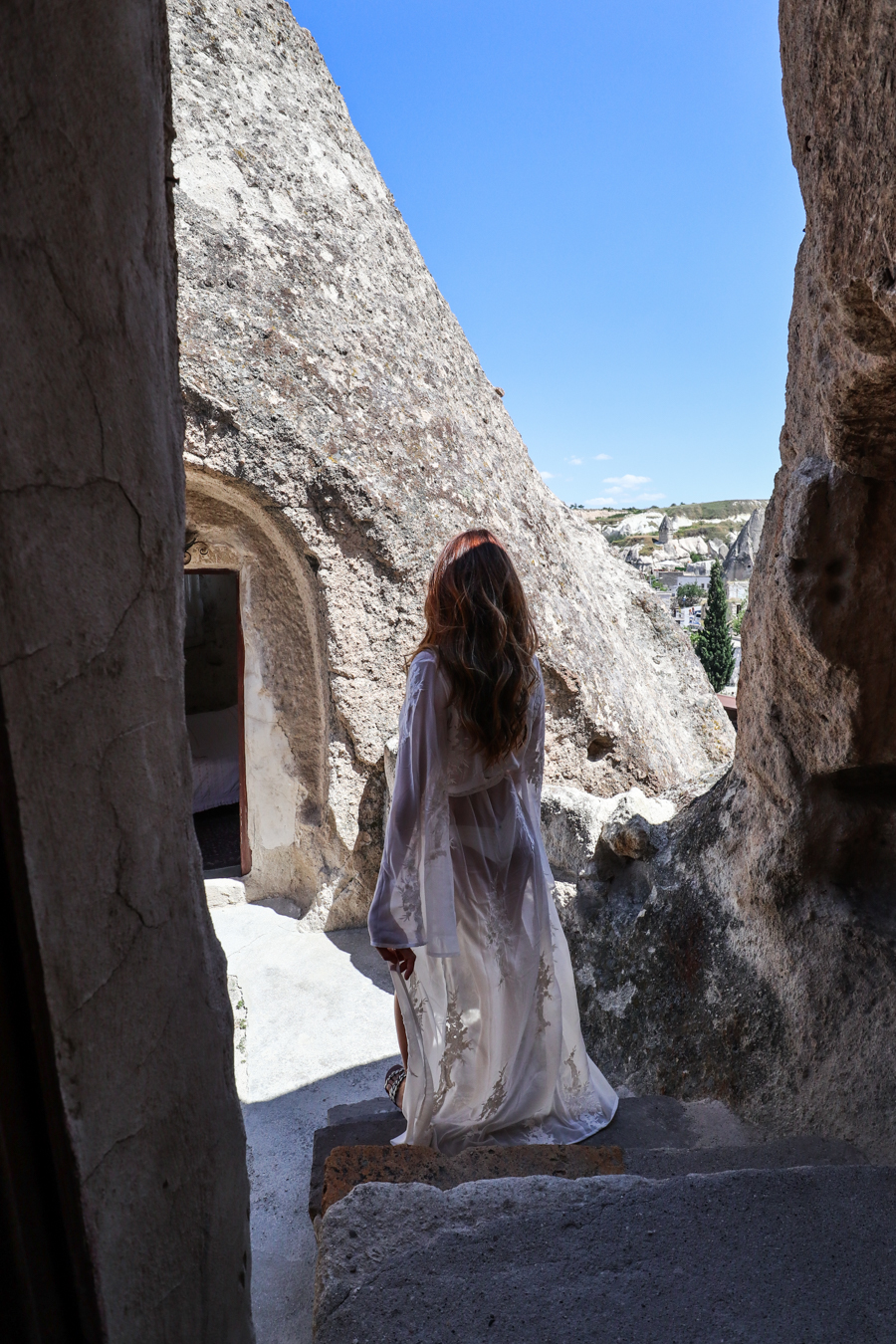 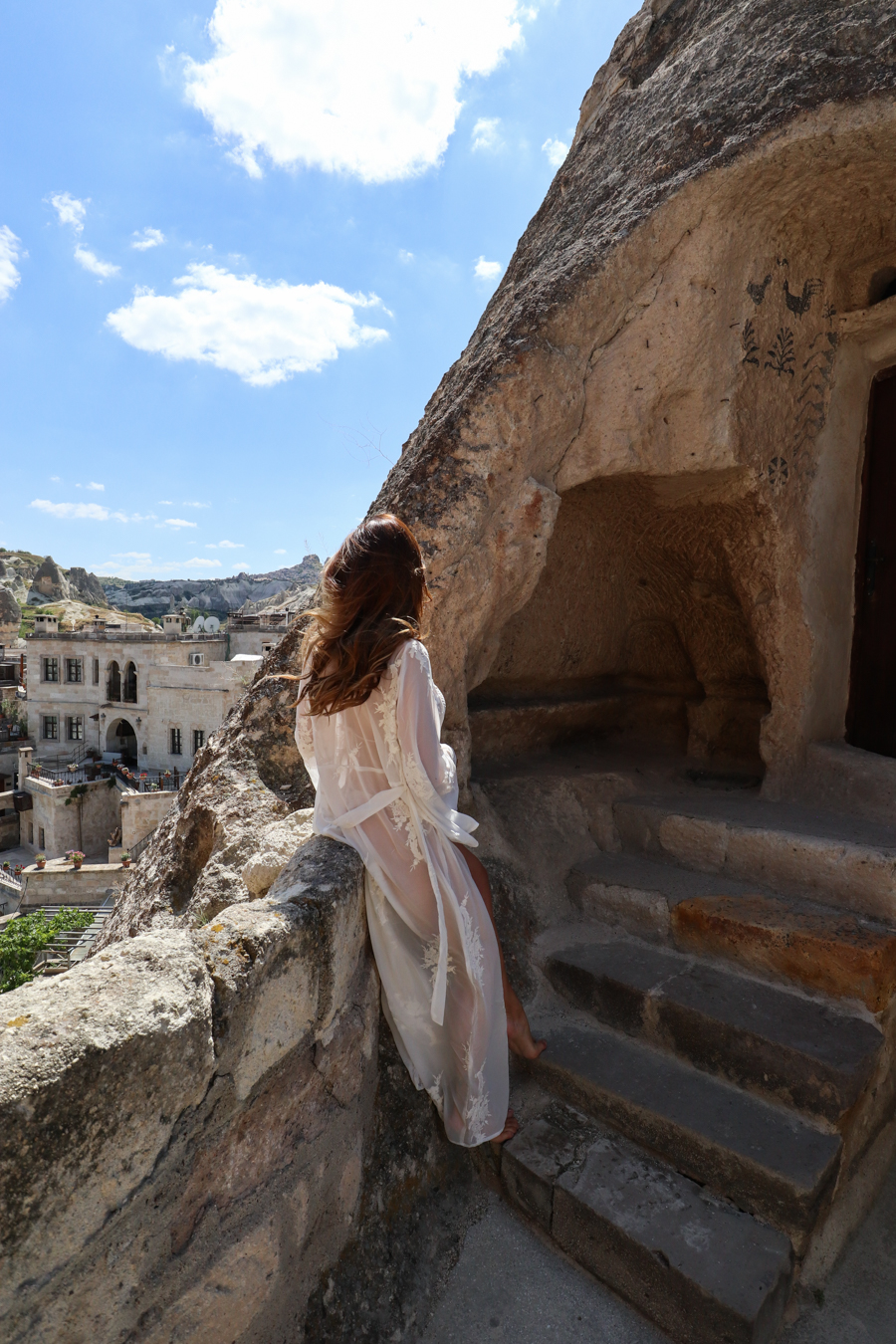 The suite of all suites though is the Heritage Cave Suite , it was a fairy tale building all of it’s own with all of the traditional architecture and rich authentic interiors, huge in size for a cave suite and came with it’s very own balcony, we adored the space and I felt like a Turkish princess waking up every morning. 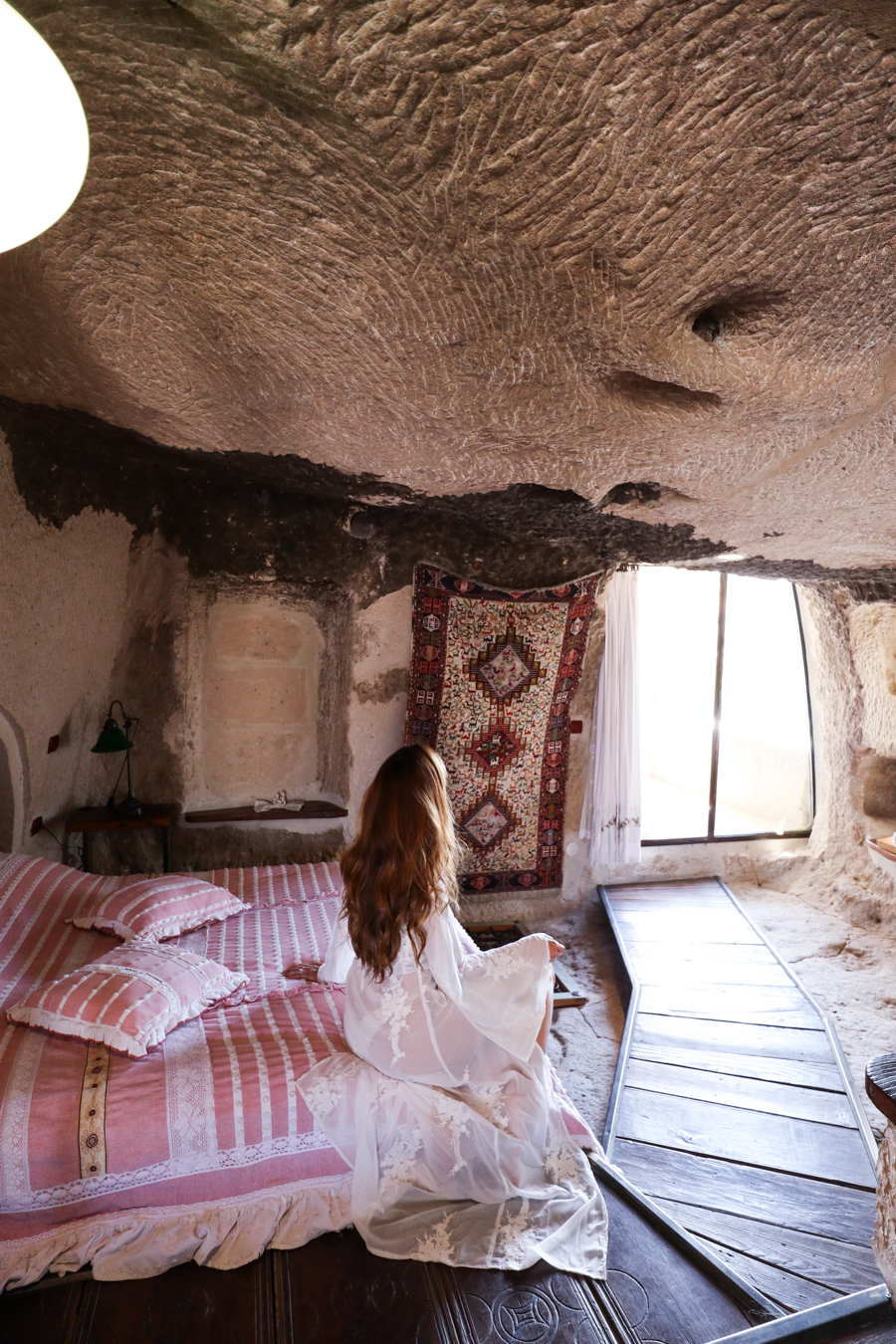 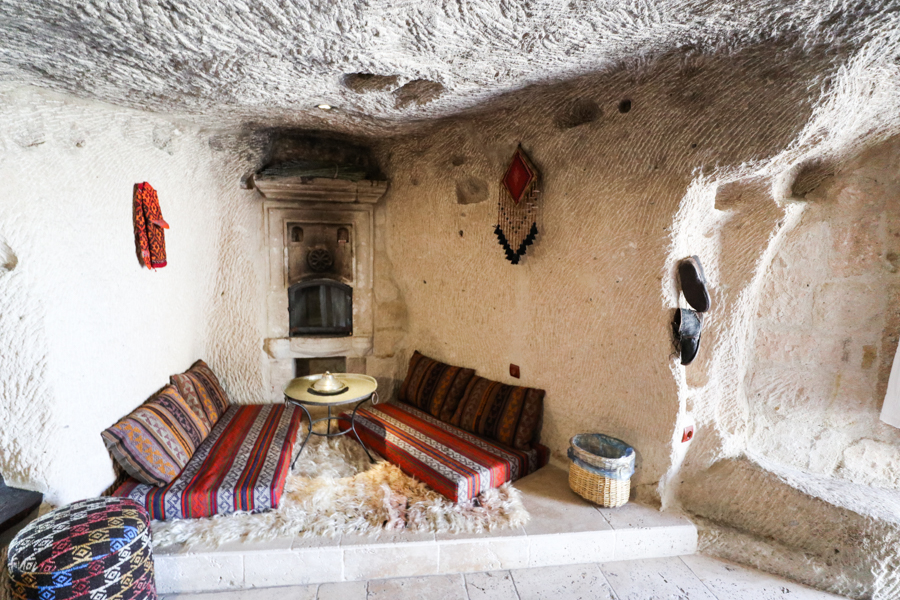 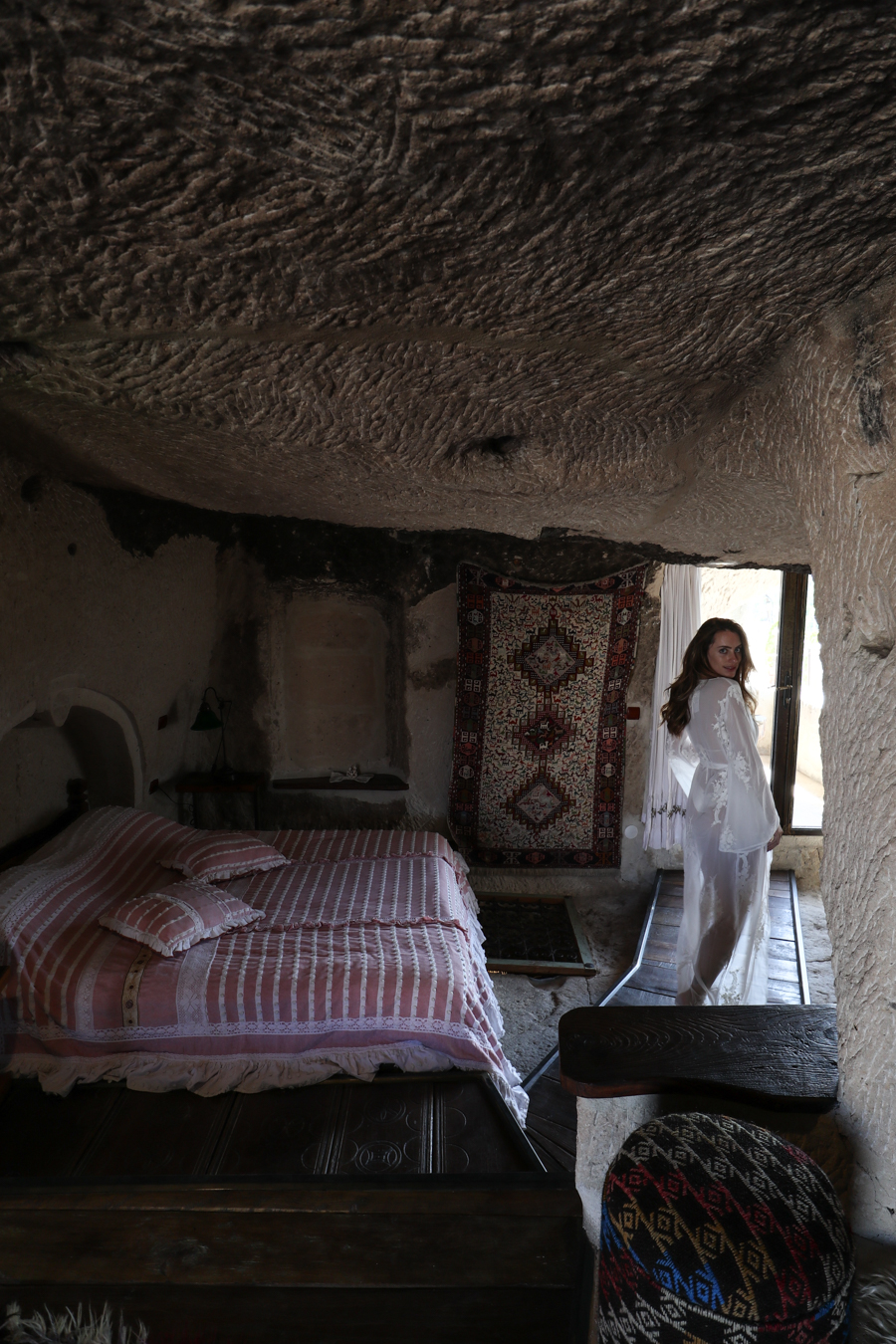 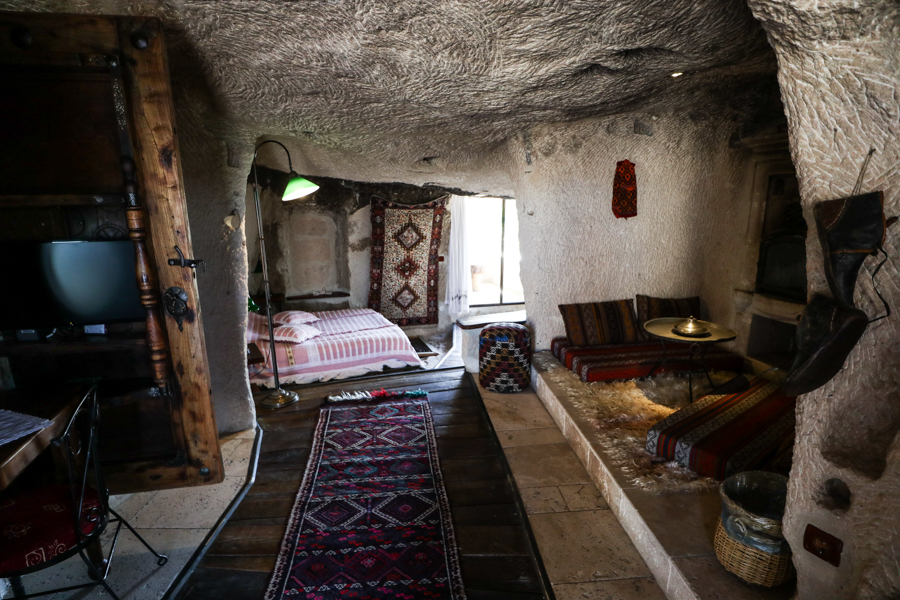 Kelebek is the sister hotel to The Sultan Caves Suites so if you stay there you are also a welcome guest to where is now known to be of the most instagrammable breakfast spots in the world! Set your alarm, put on your 5am glad rags, walk just footsteps from the hotel and you’ll end up in what feels and looks like an Arabian Palace roof top. The breakfast is just for show but WHAT a show it is!

The balloons, which, depending on the weather conditions take to the sky daily swoop just metres above the hotel. It’s such a breathtaking experience to witness and one that I’ll remember for the rest of my life. The cool thing about staying at the Kelebek was the multiple opportunities to see the balloons in the sky with a different dreamy backdrop. Whether we looked up from the pool, our room balcony or the pretty cobbled walkways we did so pinching ourselves in awe at what we were looking at! 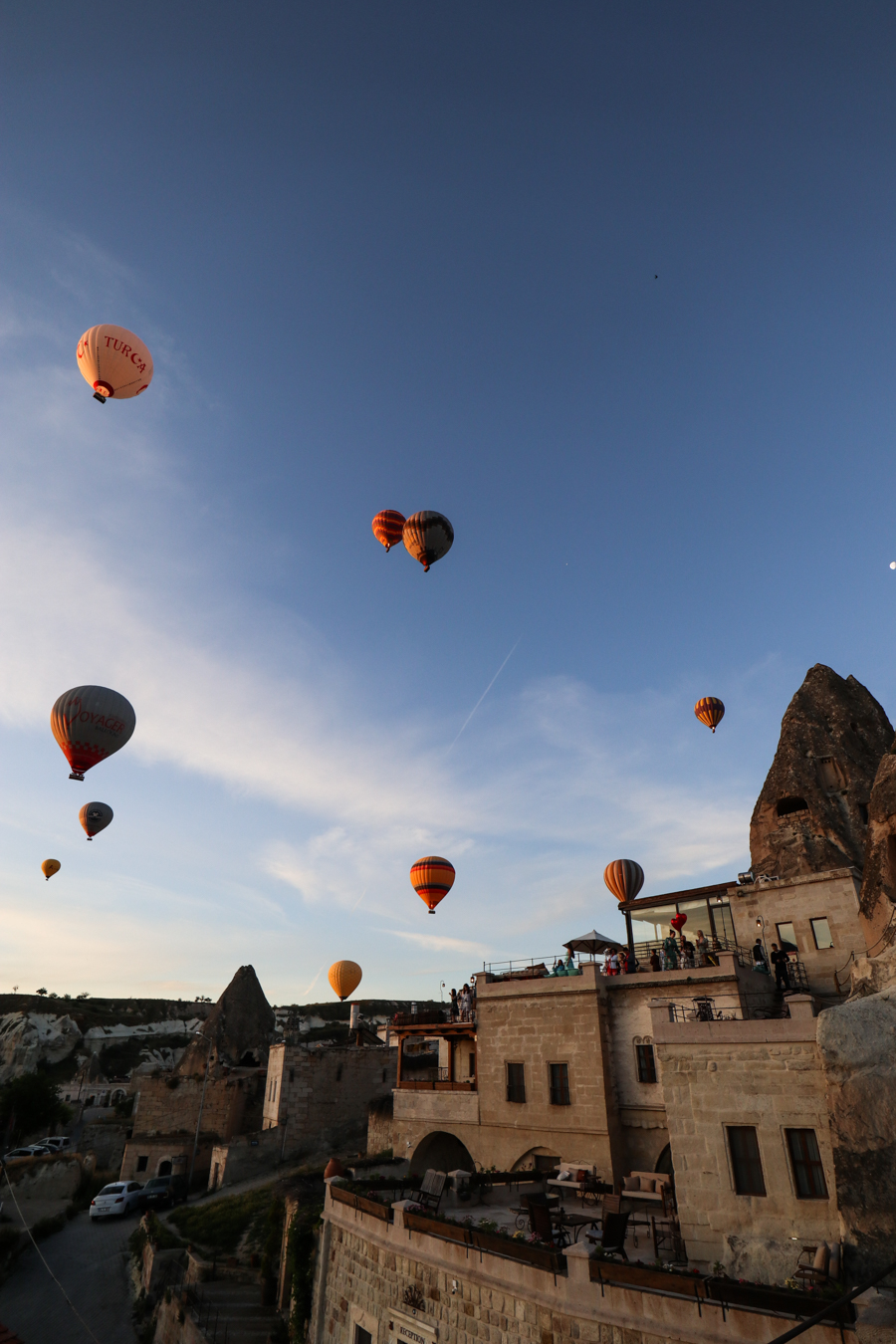 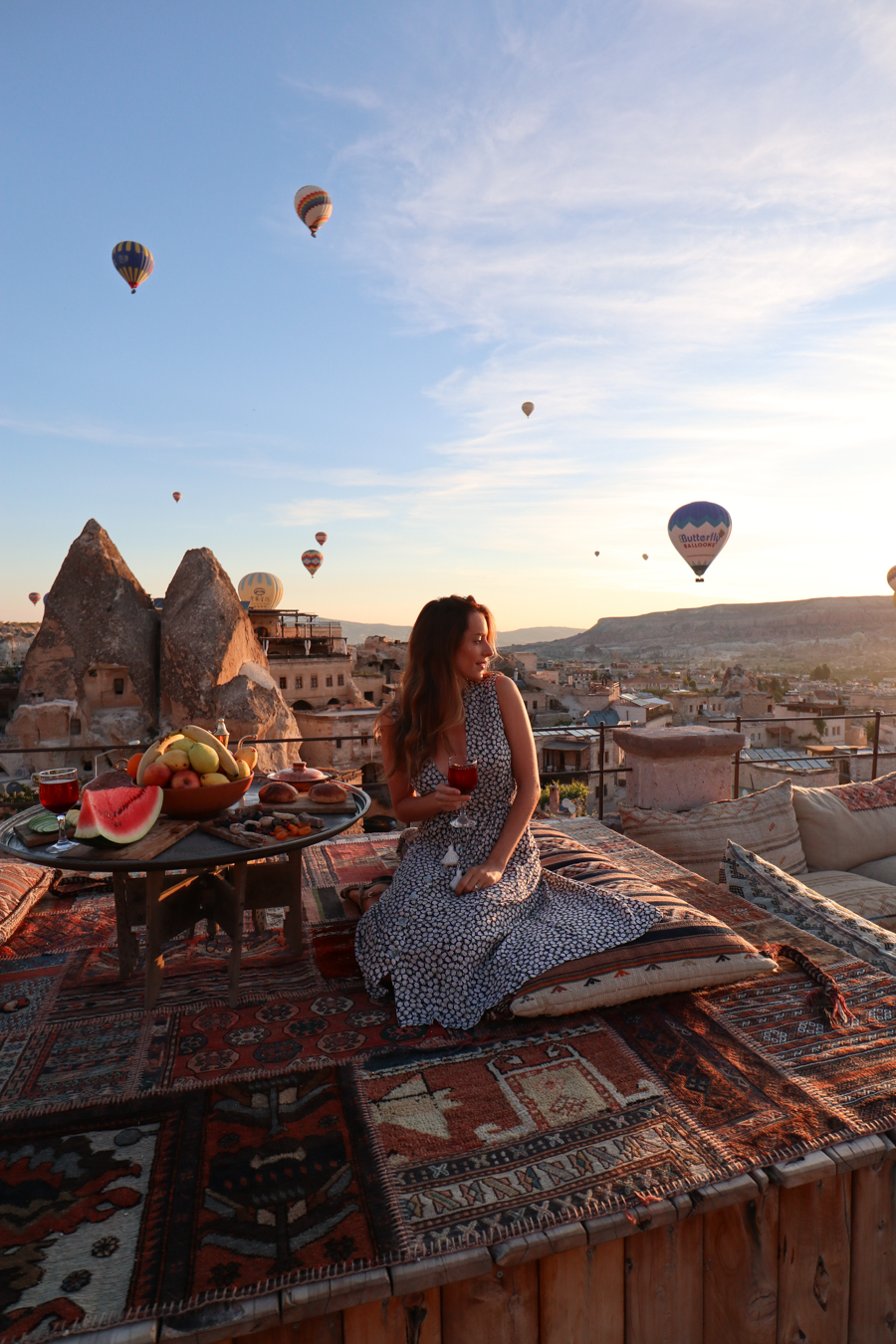 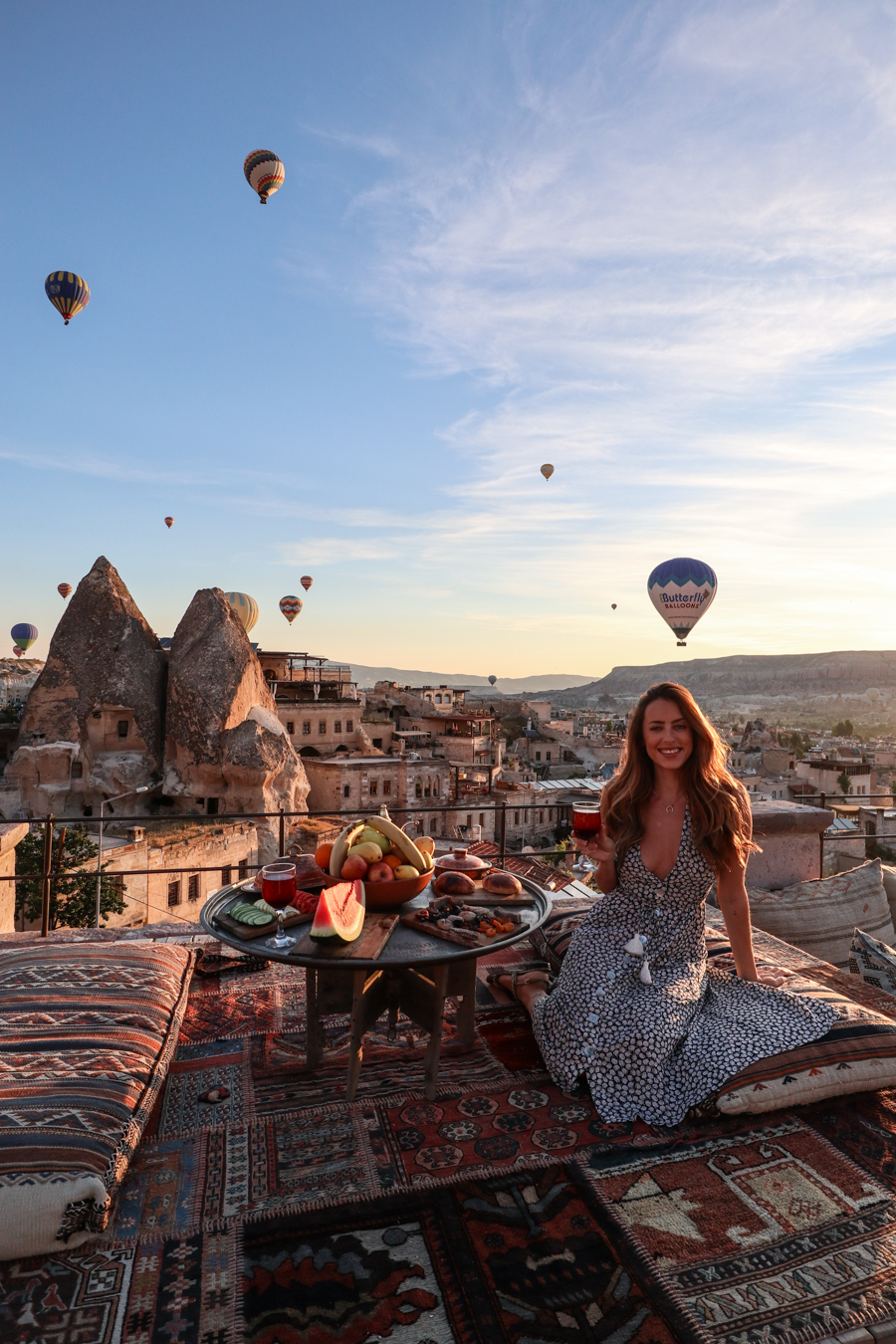 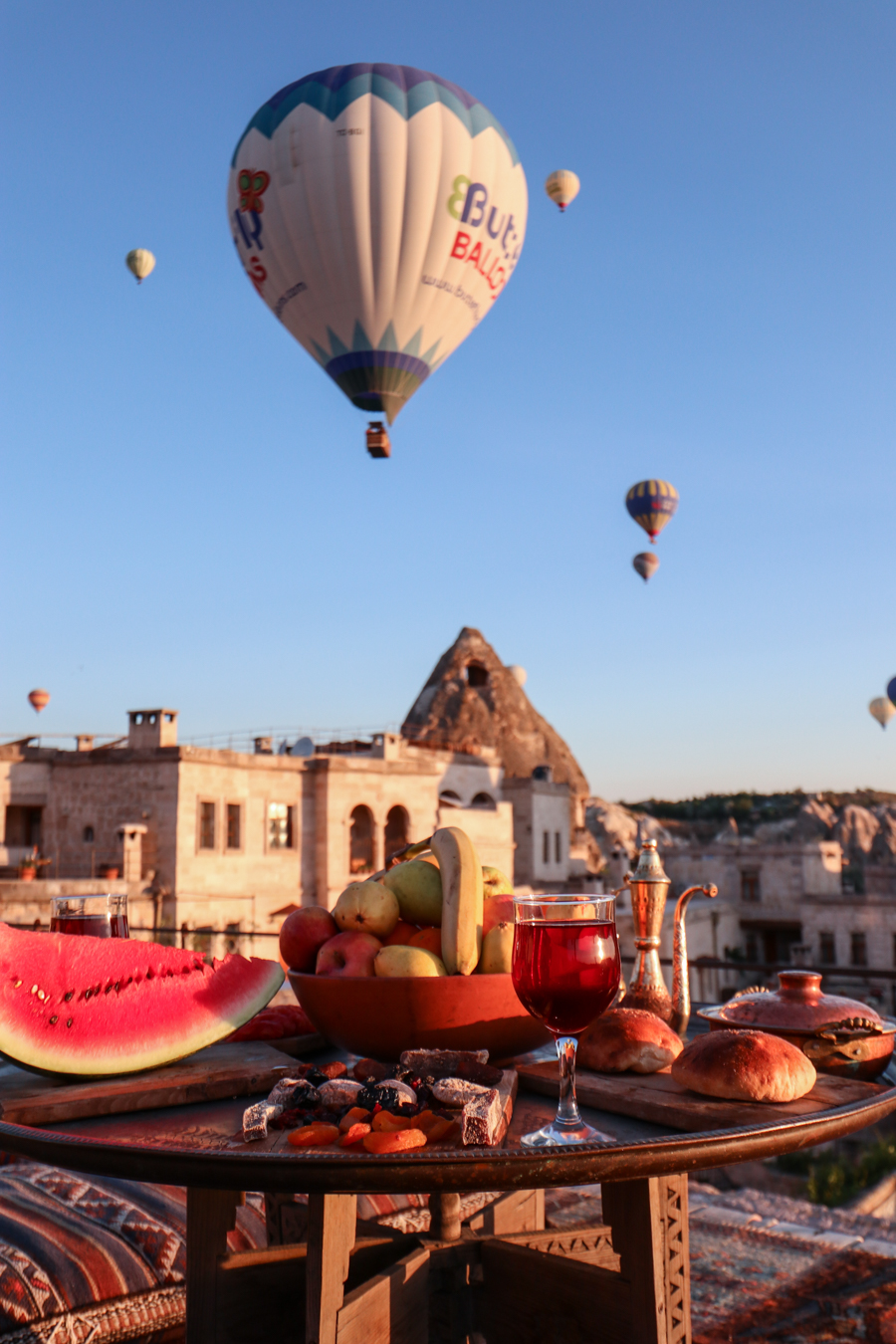 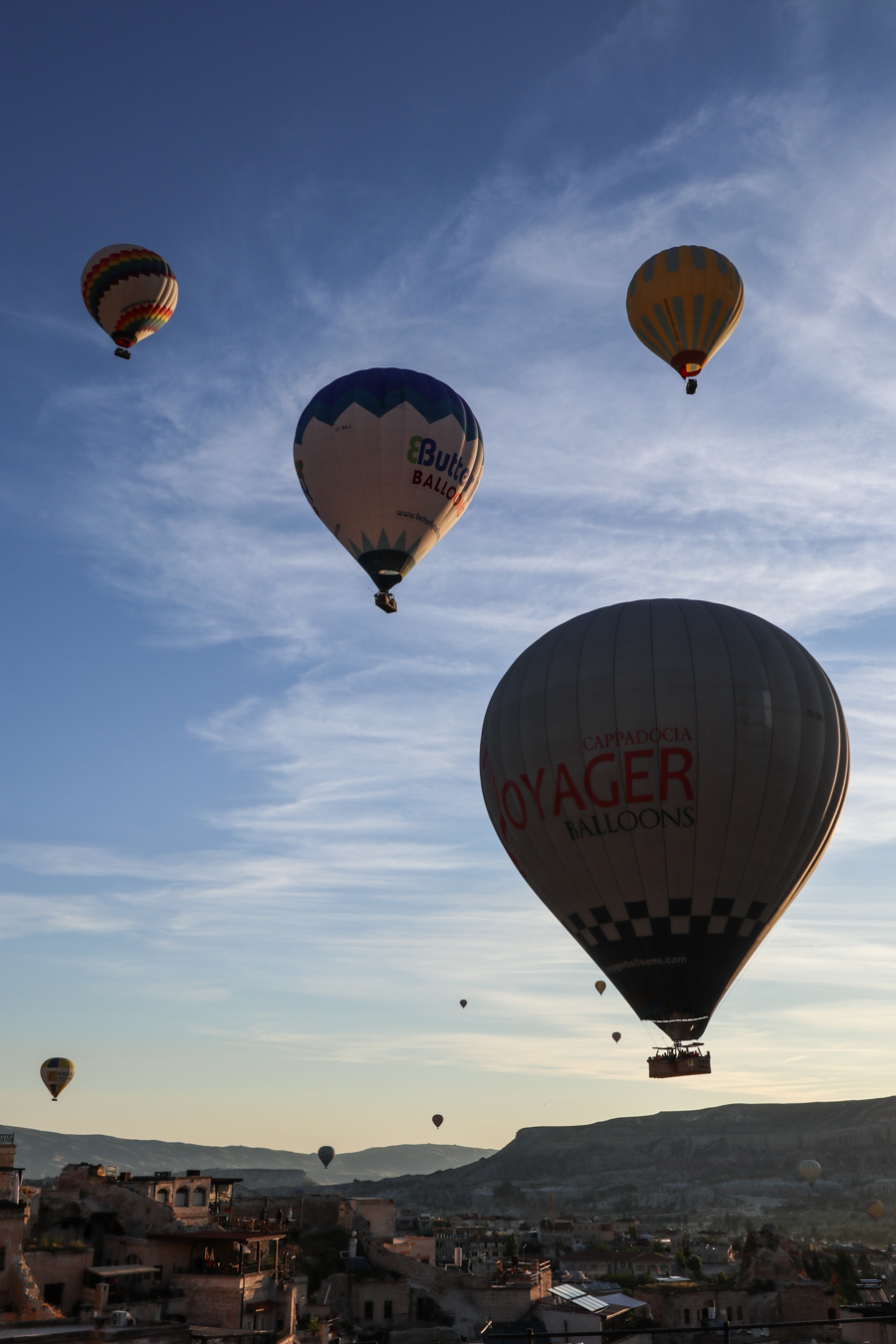 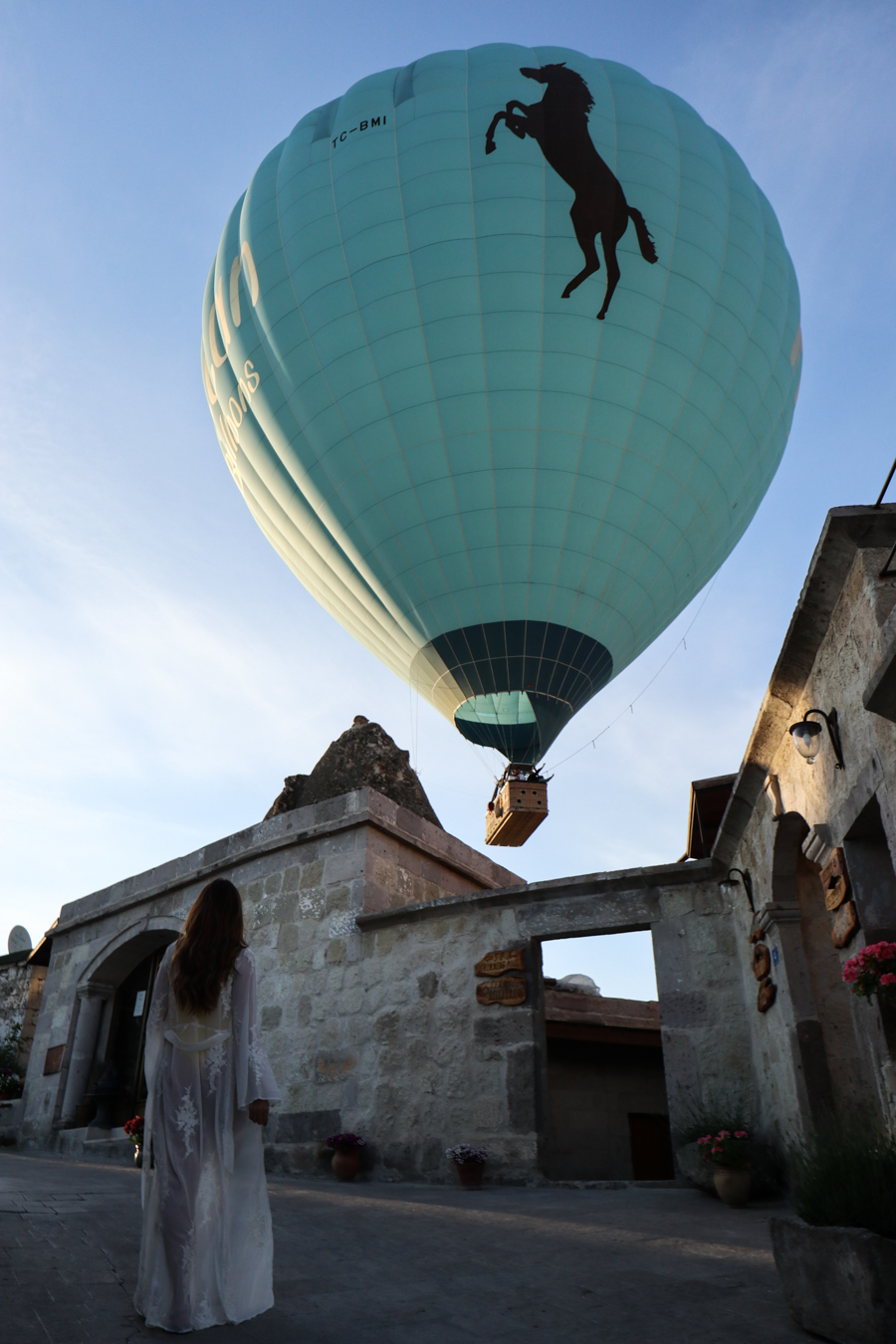 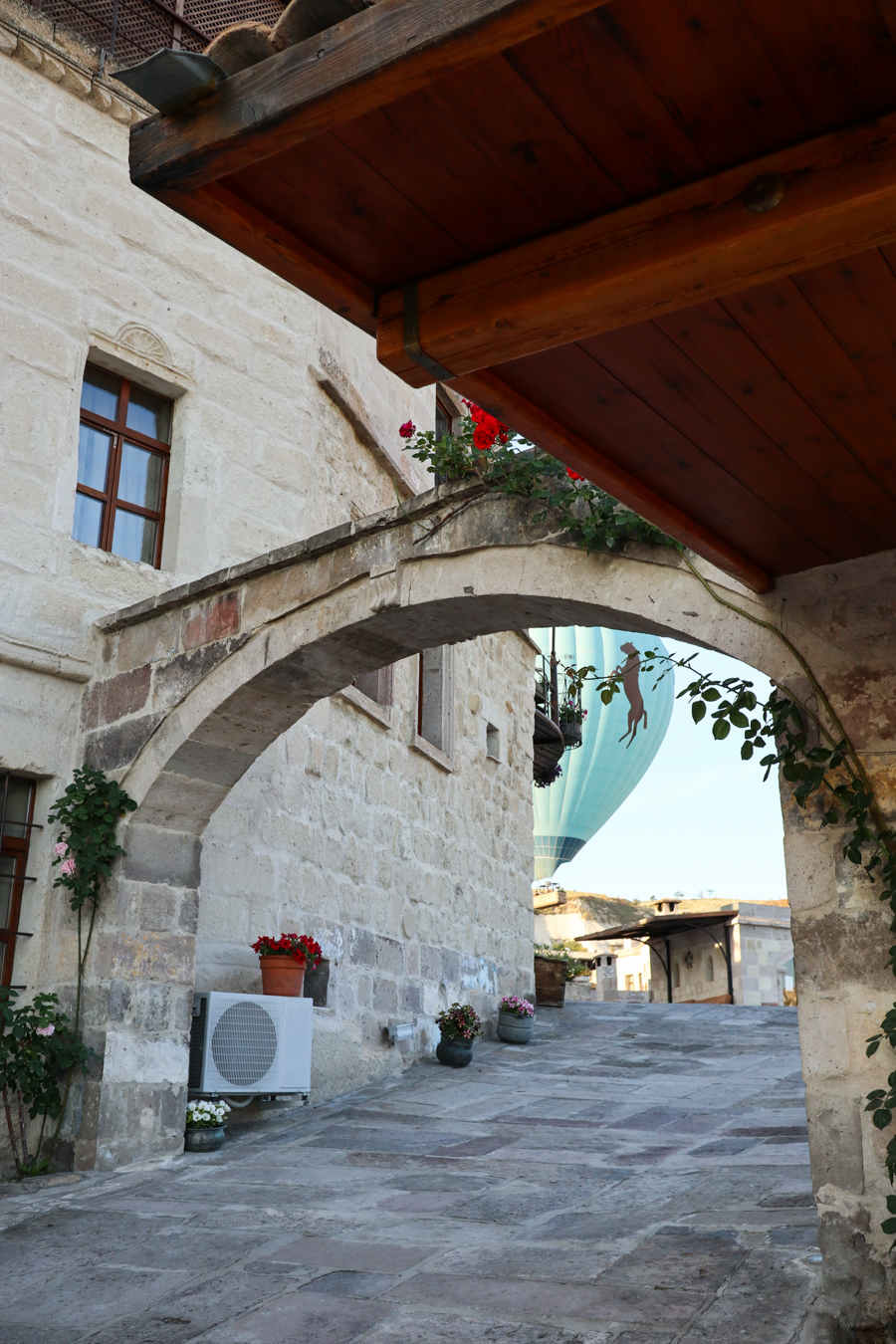 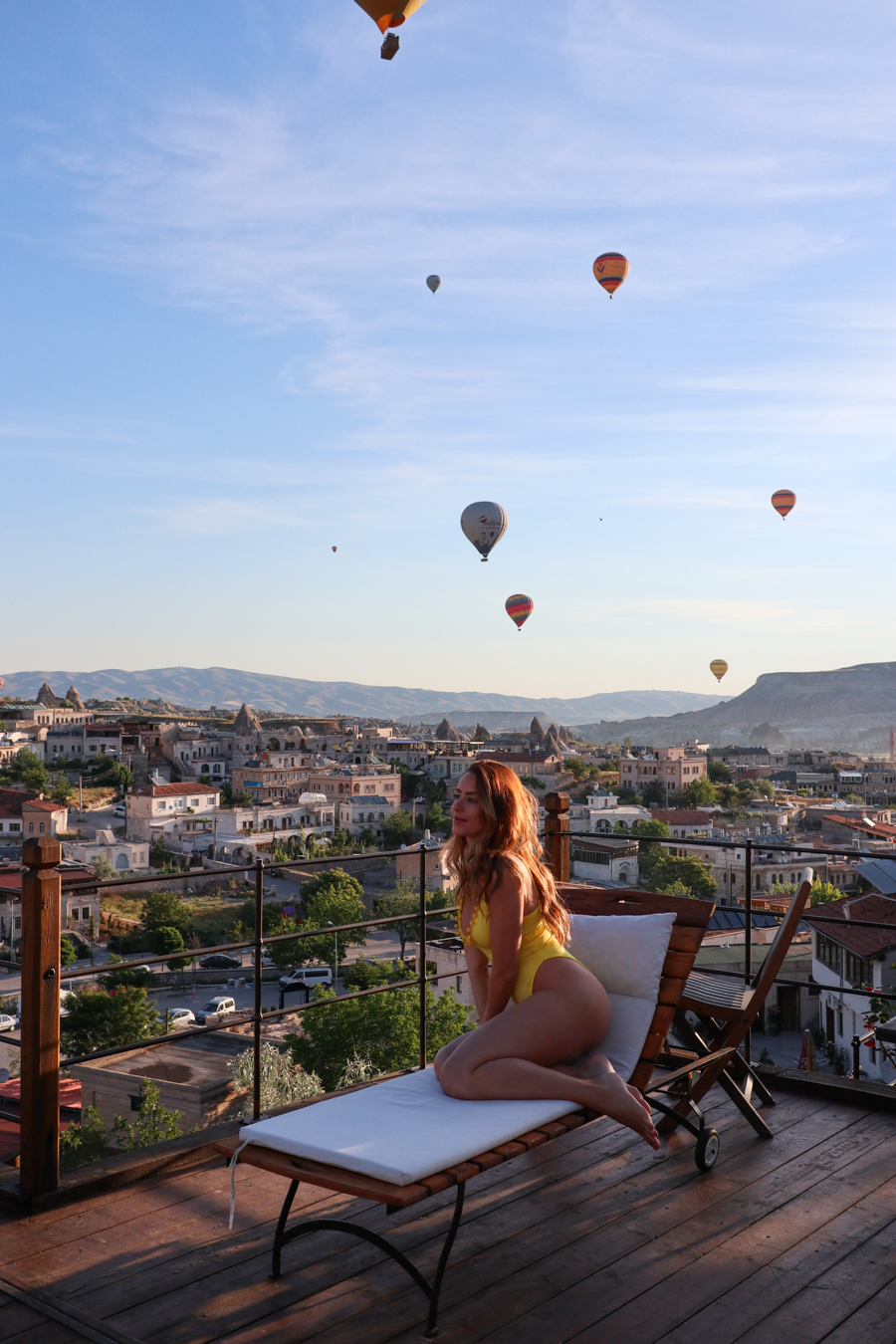 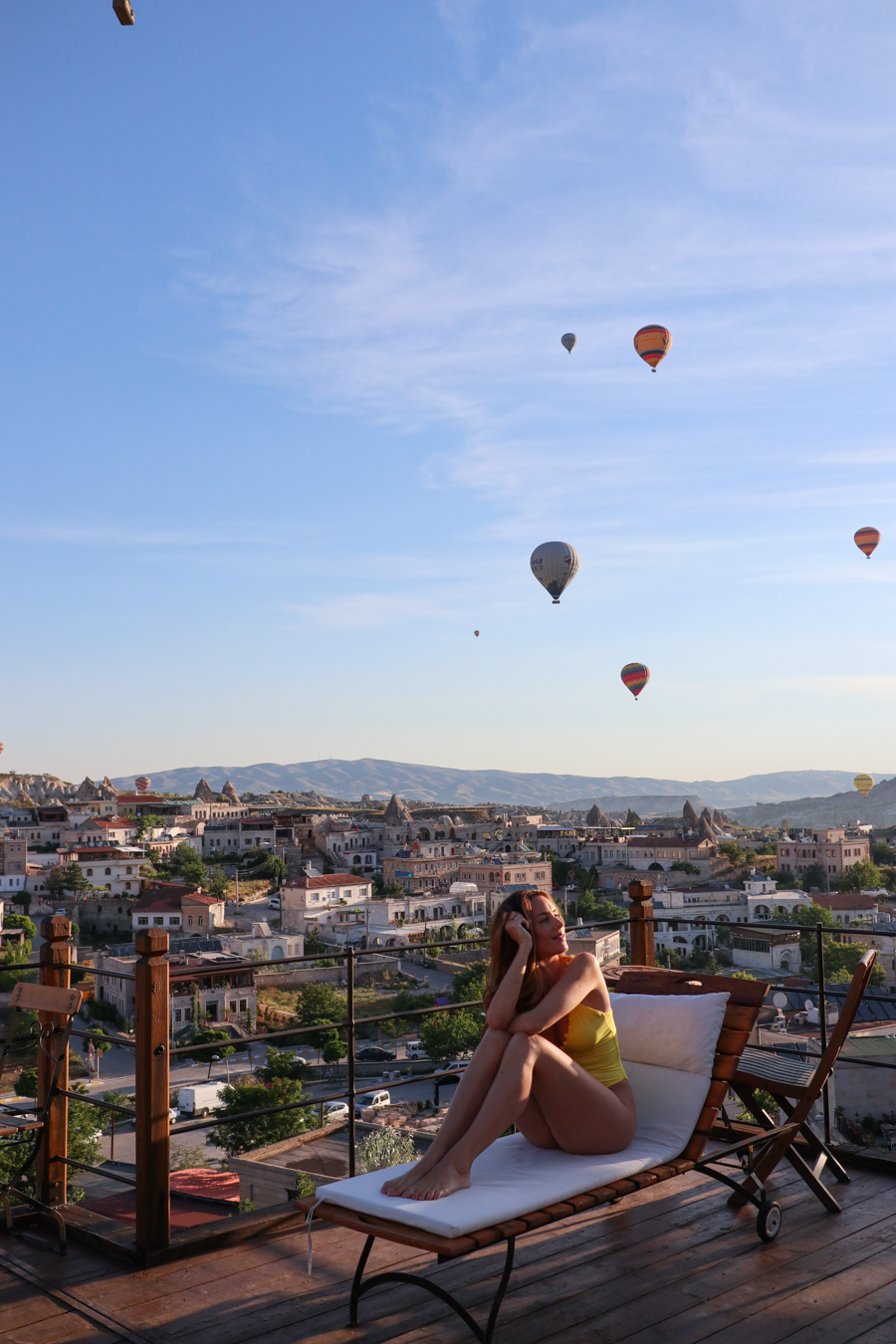 The hotel was walking distance from town and the staff were honestly amazing at helping us book all of our activities, we got up to A LOT when we were there!Cappadocia itself is an absolute dream, I’ll be writing a full post on what to do when in town but for now I just wanted to share our stay 😉 I would highly recommend Kelebek Hotel and this post was fully impartial as it was booked and fully paid for my Mems.