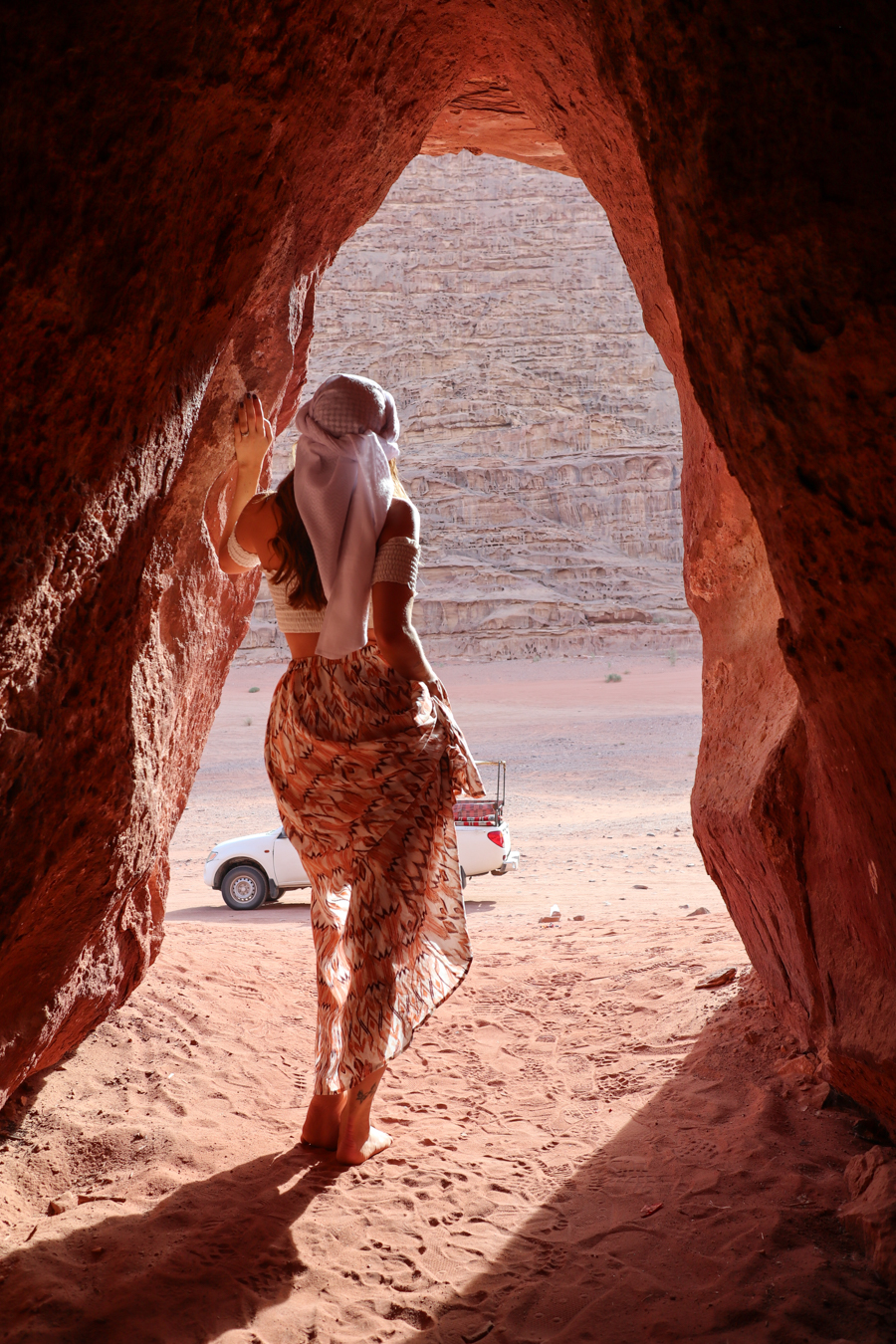 When you think of Jordan, there’s something about the film-set- worthy landscapes and world renowned marvel that makes you imagine a distant, unreachable land. Though in reality, it’s a short four and a half hour plane journey from London.

The lost City of Petra has sat at the top of wander-lusting bucket lists for as long as travel guides have been written due to the rich heritage and titled world wonder of the ancient city. When planning a trip to Jordan I read a number of guides that showcased ‘Things to do in Petra’ or ‘Why you need to visit the Dead Sea’ but knowing I had every intention of doing both I struggled to find a guide that laid out a full itinerary from plane to plane. So trying to keep things as sharp and short as you are able to scroll, here’s my full itinerary for five days in Jordan.

Day One – Getting There

Getting there is a great place to start! We booked direct flights with British Airways from Heathrow to Amman airport but whilst online booking I saw that there was a number of different airlines offering direct flights from the UK. We chose British Airways as our airline due already being active members of the One World Club.

On arrival at the airport you can either pre-book a transfer with your hotel or do as we did and simply jump in the first taxi you see. Now, to prepare you fully cabs in Jordan aren’t quite the same as ours here in Europe (always better to go into things prepared!) most cars are pretty visibly ‘weathered’ and the drivers will be unlikely to stick to any sort of speed limit and if you are really lucky, as we were, they’ll even smoke a few cigarettes whilst chauffeuring you to your desired destination 😉 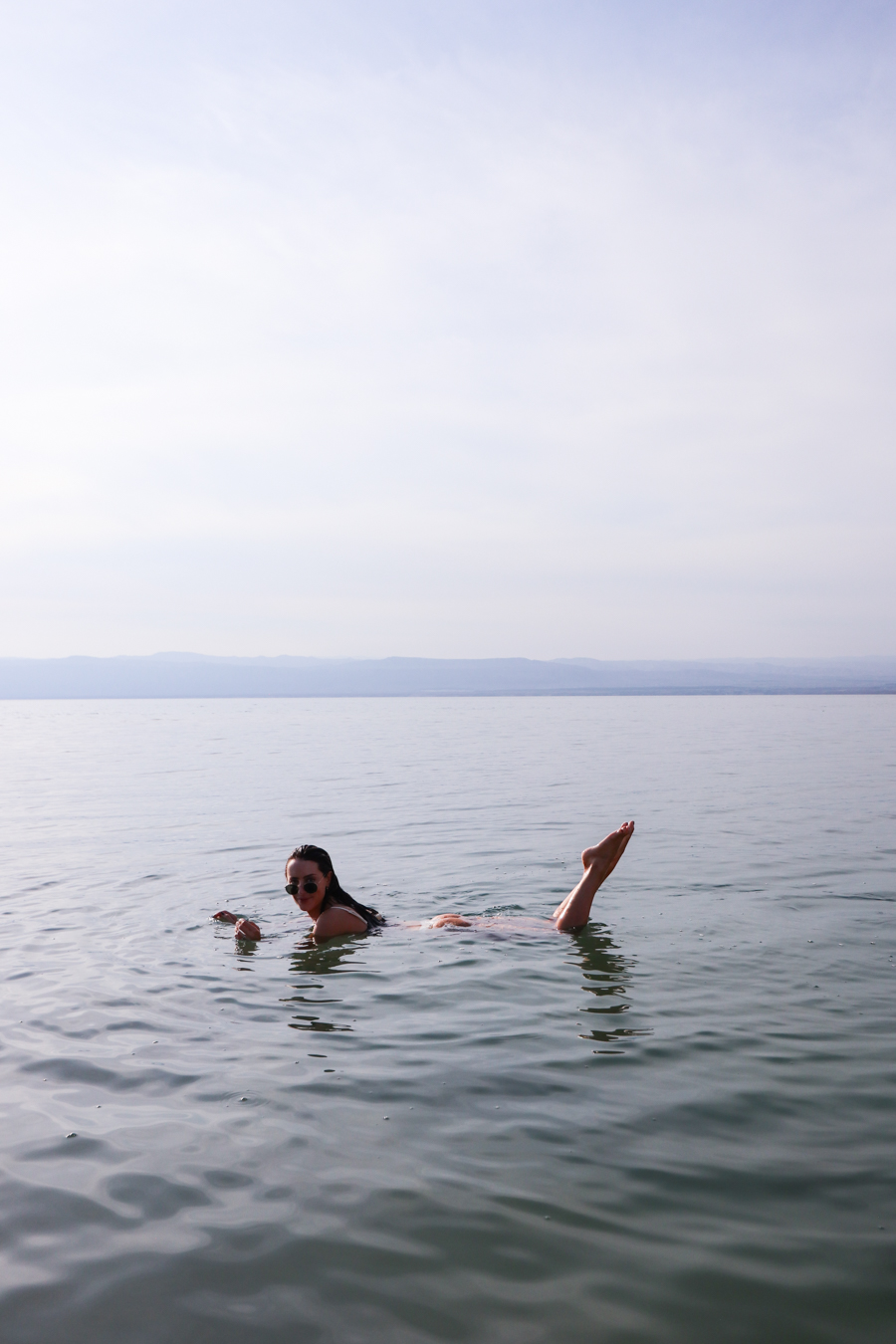 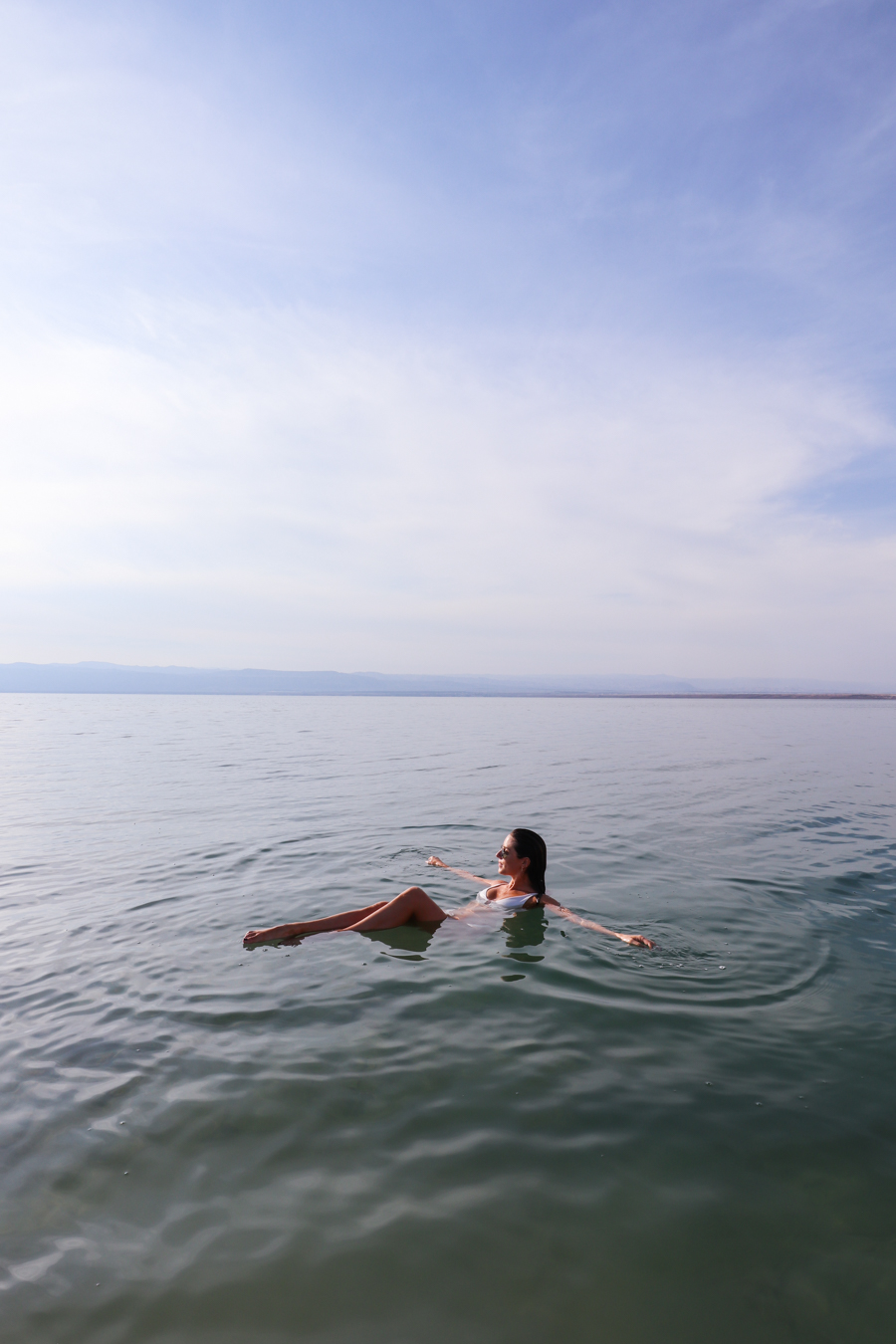 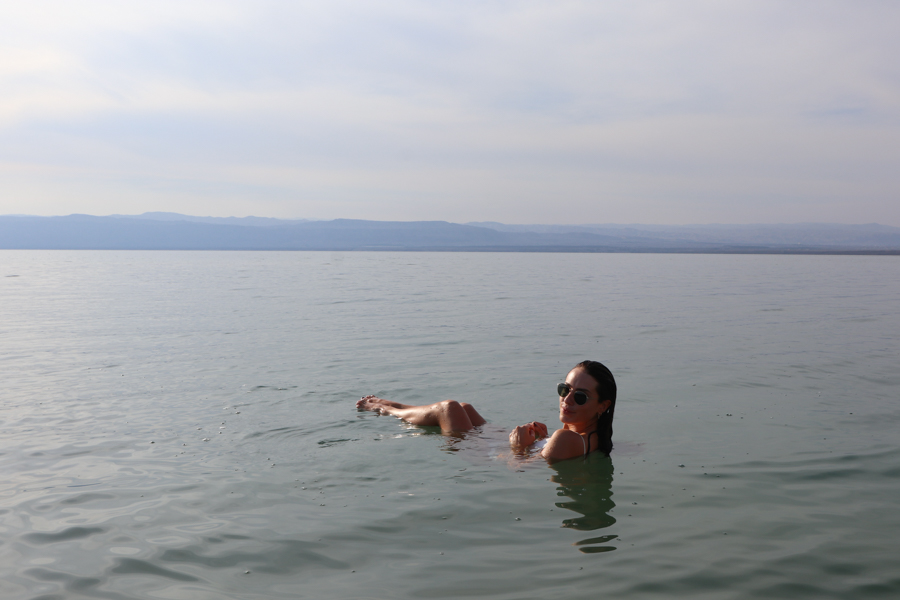 We decided to sandwich our predominate sight-seeing adventure with the more relaxing and rejuvenating locations at the start and end of the trip and the more active and inquisitive locations in the middle. So our Jordanian expedition started about a 45 minute drive from the international airport at The Dead Sea.

The Dead Sea itself splits between Jordan and Jerusalem but it’s expanse is quite small in distance within the country of Jordan, so much so that the area itself if labelled as such as the few hotels that surround it all share the (now regulated) tourist attraction of the natural phenomenon. The Dead Sea, for those of you that aren’t familiar is like no other in the world. It’s highly dense salt content means that even weight as heavy as humans floats when submerged in the water.

This salt content and therapeutic floating experience is not all that makes the Dead Sea famous, it’s also world renowned for curing skin and joint ailments because of it being rich in minerals and nutrients that media-scientists swear by. People with certain conditions will travel across the world in the hopes that the dead sea will help to cure them or at the very least alleviate their pain.

For me no trip to Jordan would be complete without a swim or more accurately described as a ‘bob’ in the Dead Sea. This therefore was the very first stop. 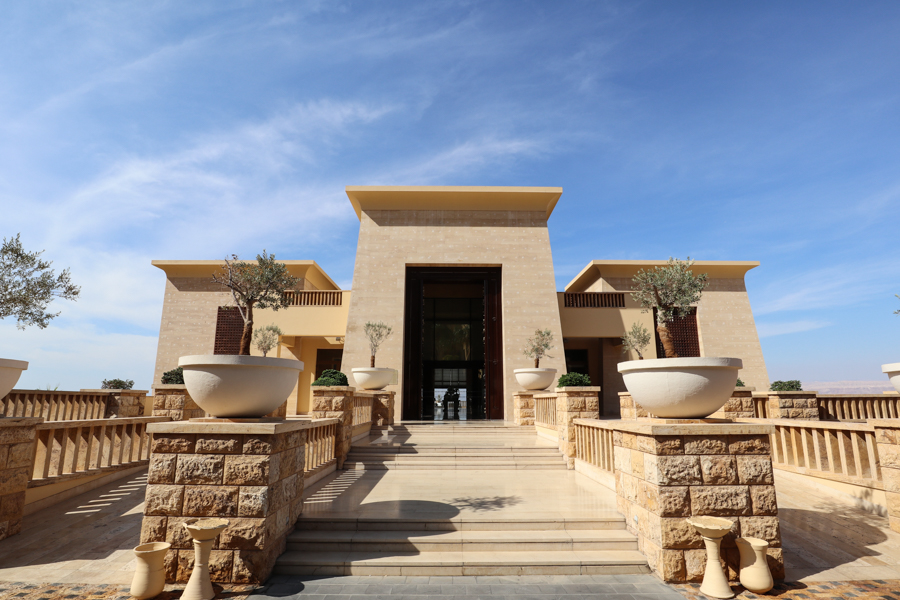 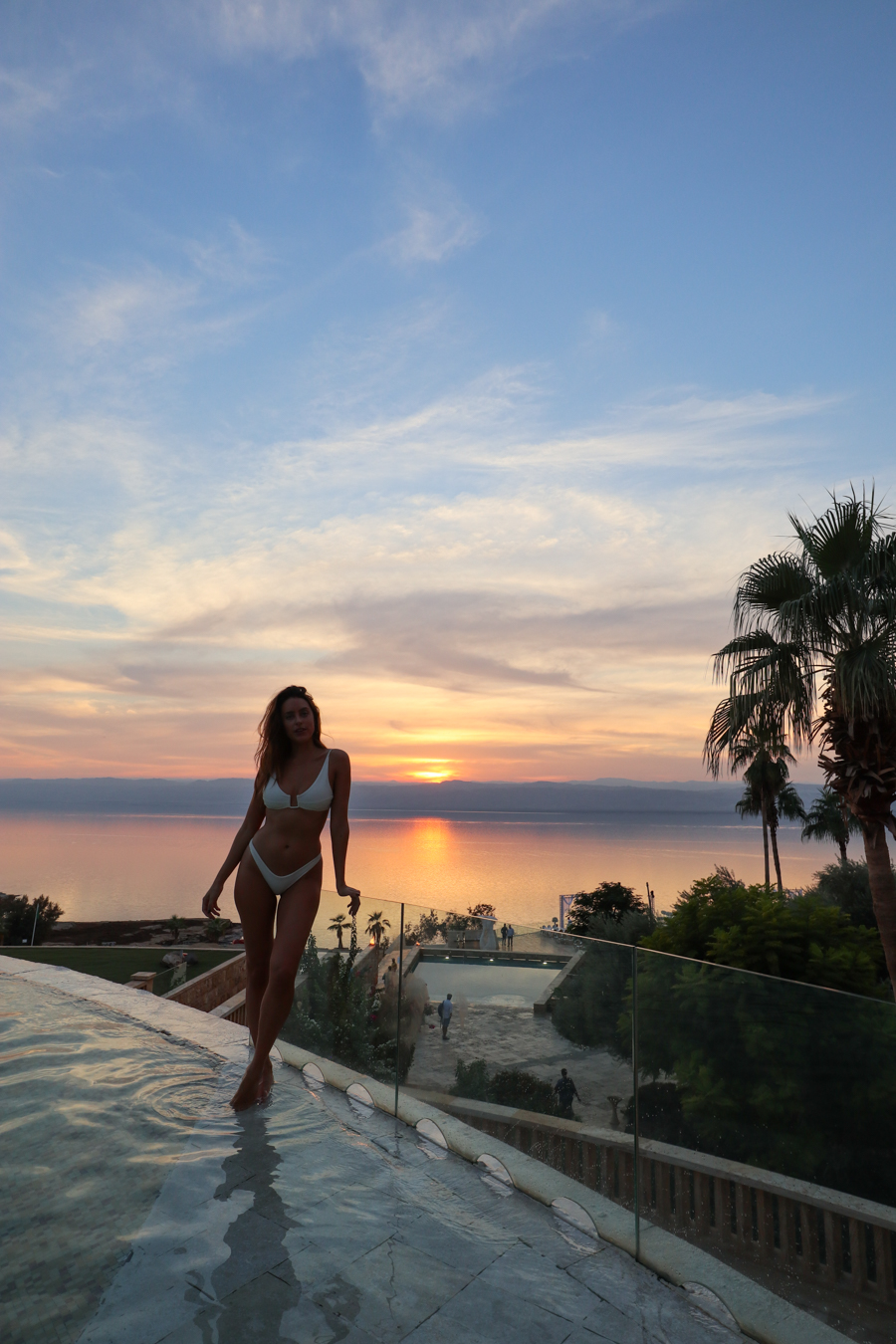 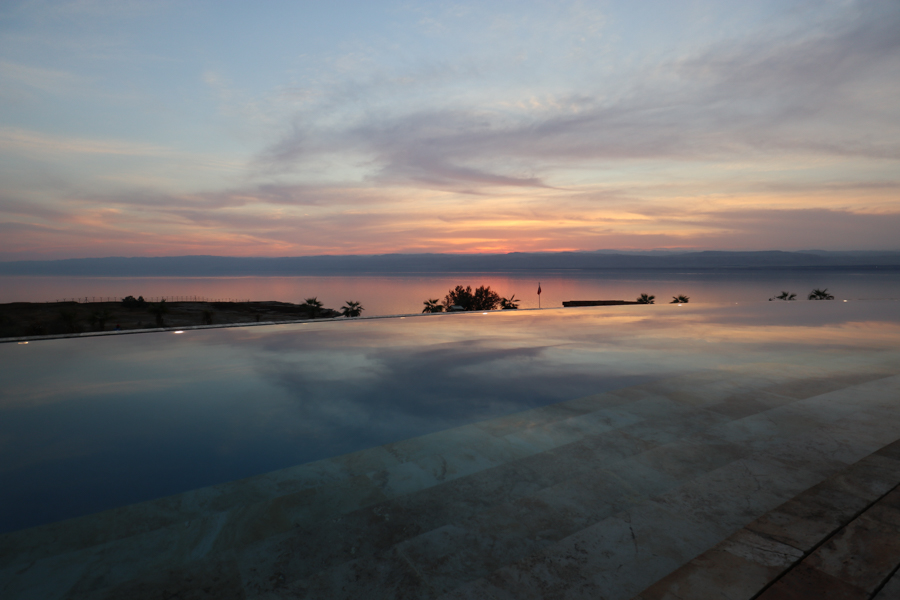 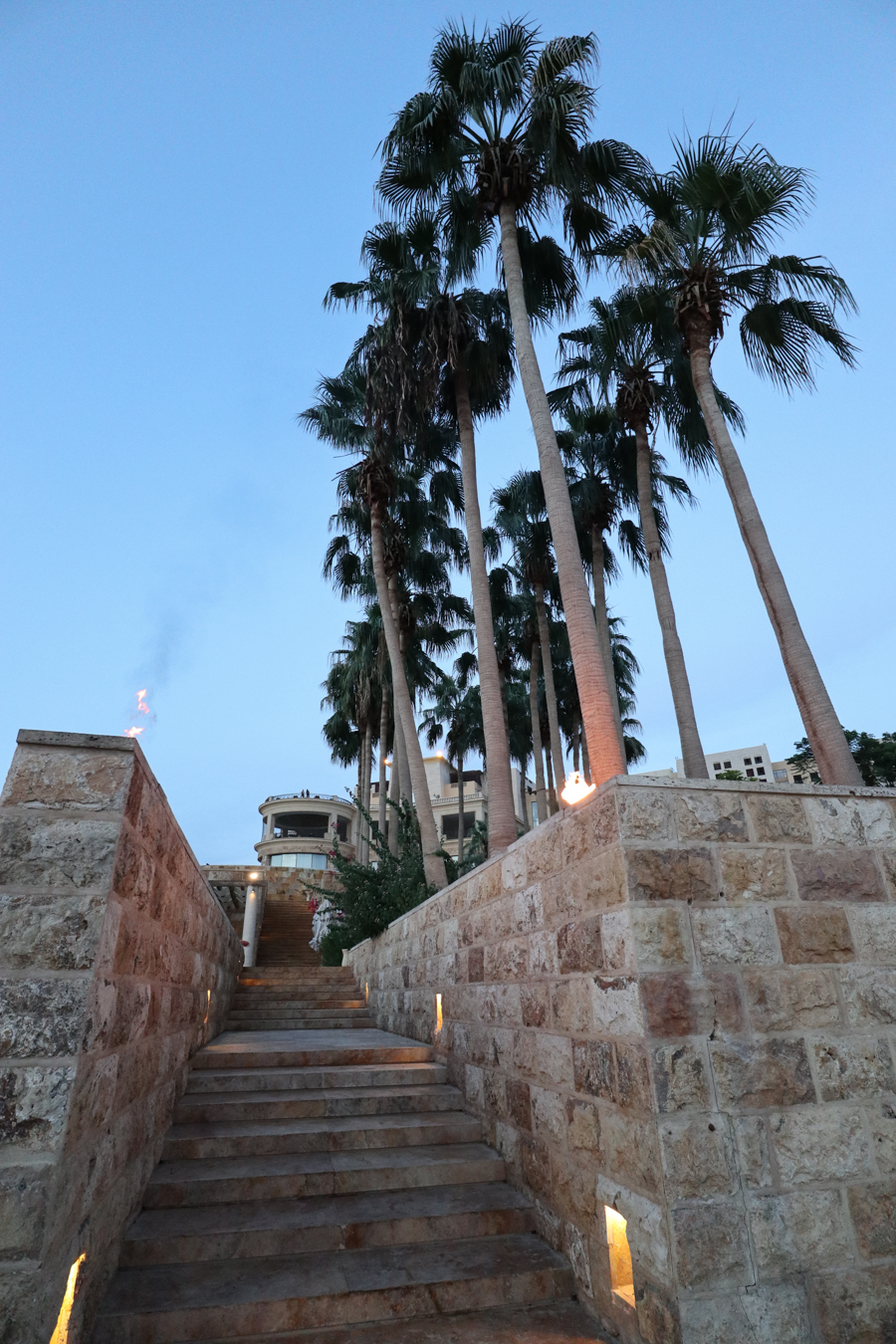 The most famously decadent and luxurious hotel in Jordan is located by The Dead Sea. The Kemplinski, known to locals as the ‘best’ in the country doesn’t disappoint for tourists either. The property is huge with an authentic yet modern style, there’s a number of swimming pools within the resort with a showstopper infinity pool that looks over (and optically into) the dead sea. The view is incredible and the swim up style look-out from this pool is worth staying at the hotel alone. There’s then the spacious rooms, extensive breakfast, great service and enticing shisha deck that adds to the convenience and excitement of your stay.

There’s a private section of the beach for guests to enjoy the ‘must’ dip in the dead sea with towels, a shower, a seating area and lifeguard. You can wander down from the pool or your room within minutes, it’s pretty perfect! We stayed two nights and loved it, I would highly recommend The Kemplinski for the ‘Best Place to Stay in The Dead Sea’. 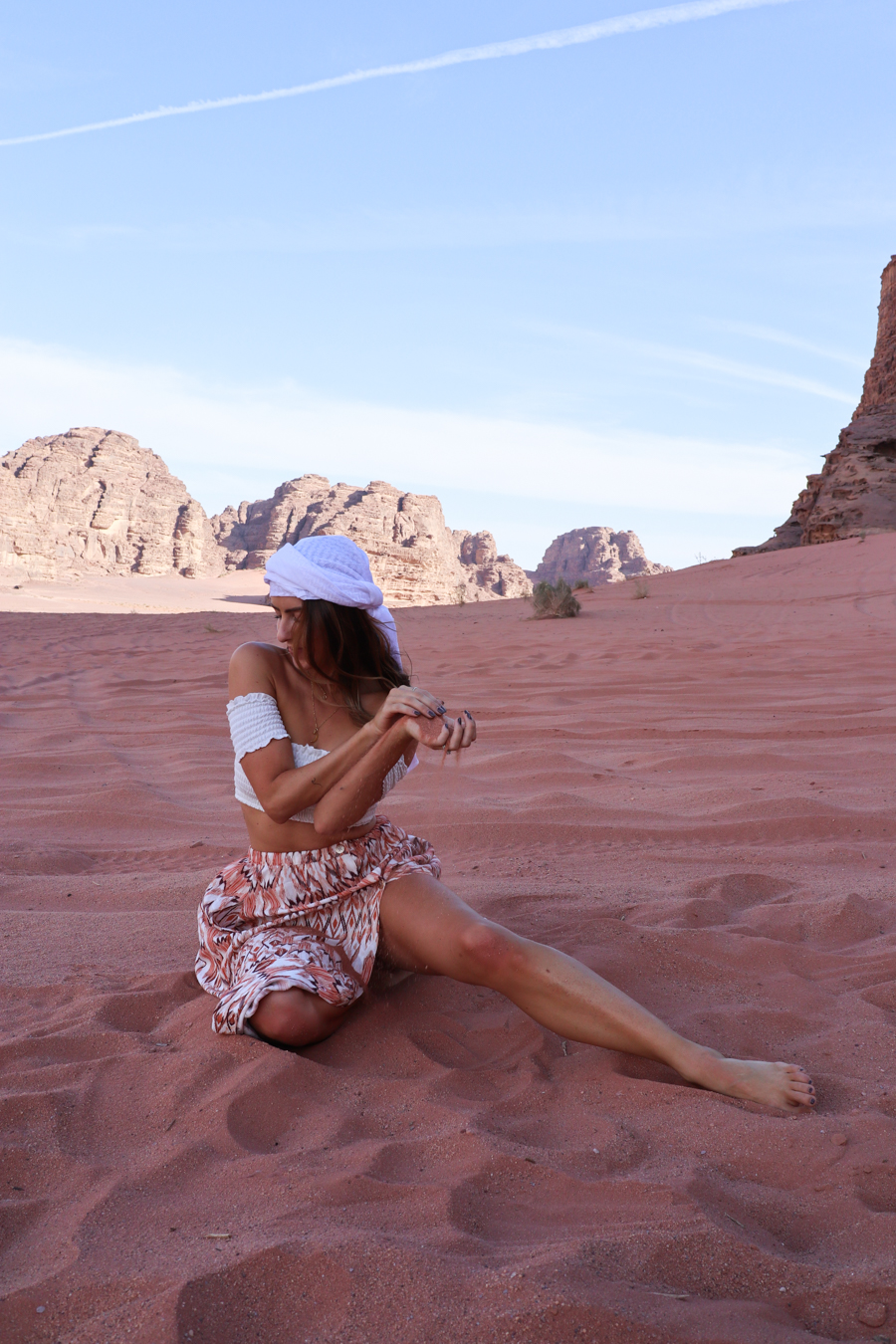 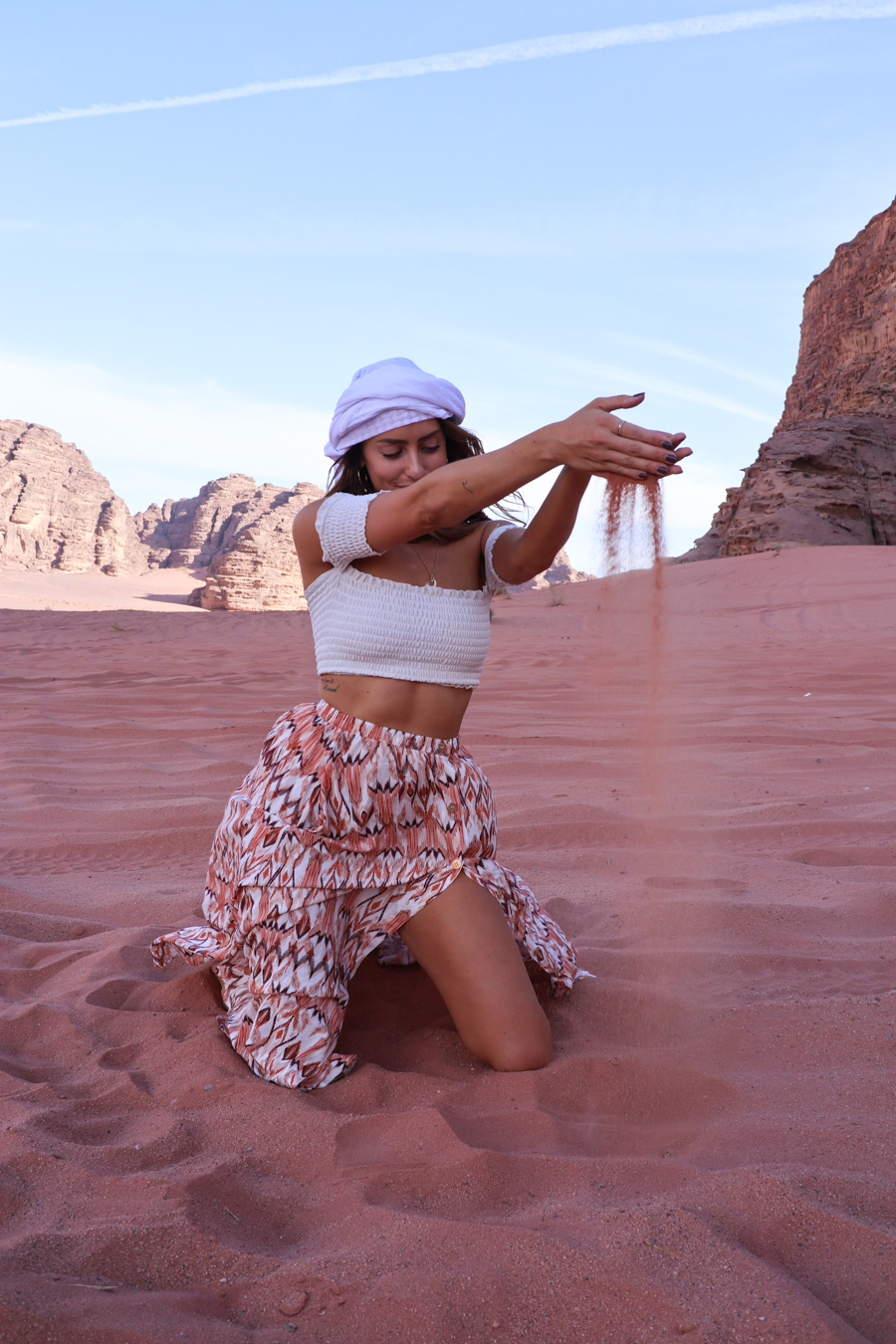 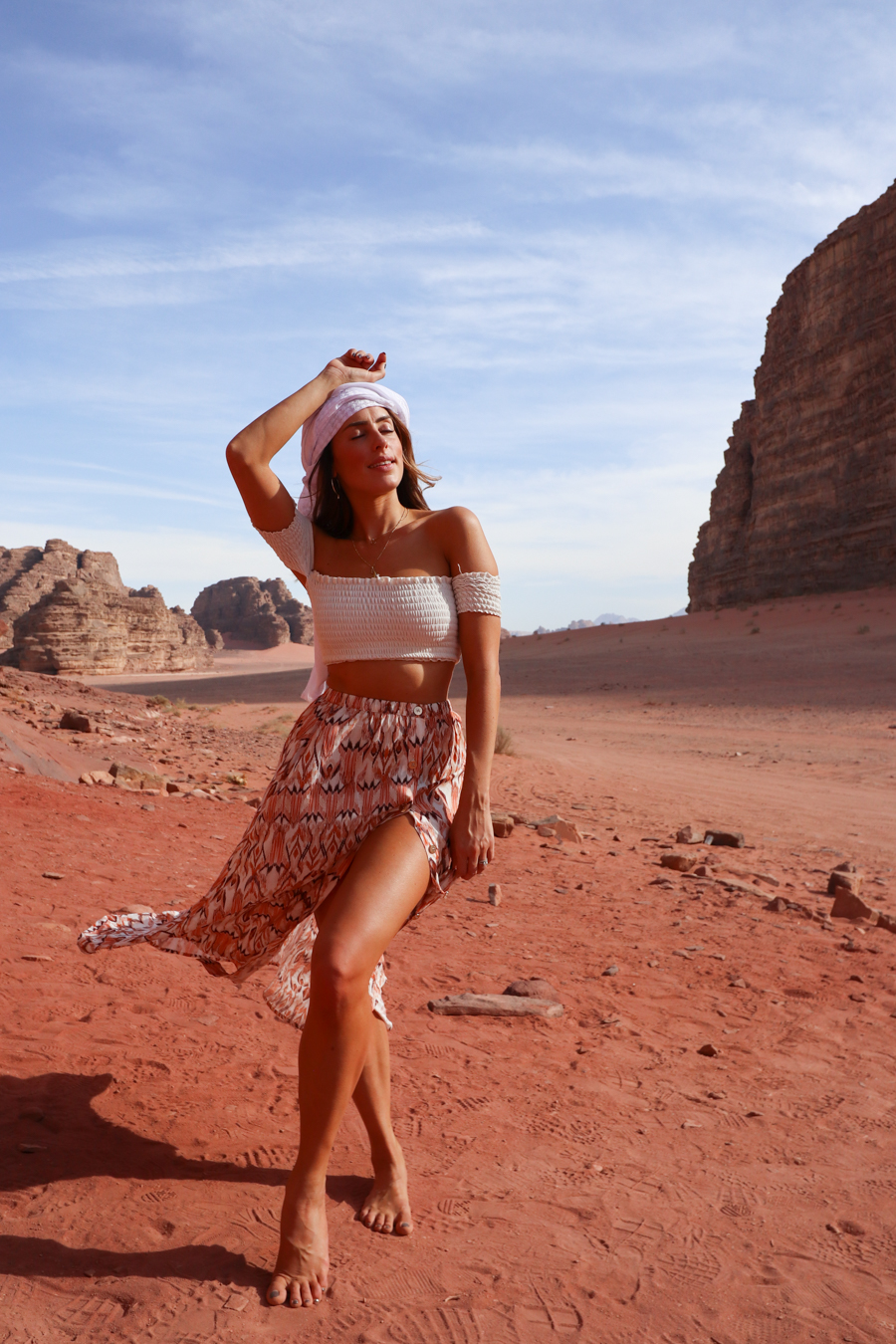 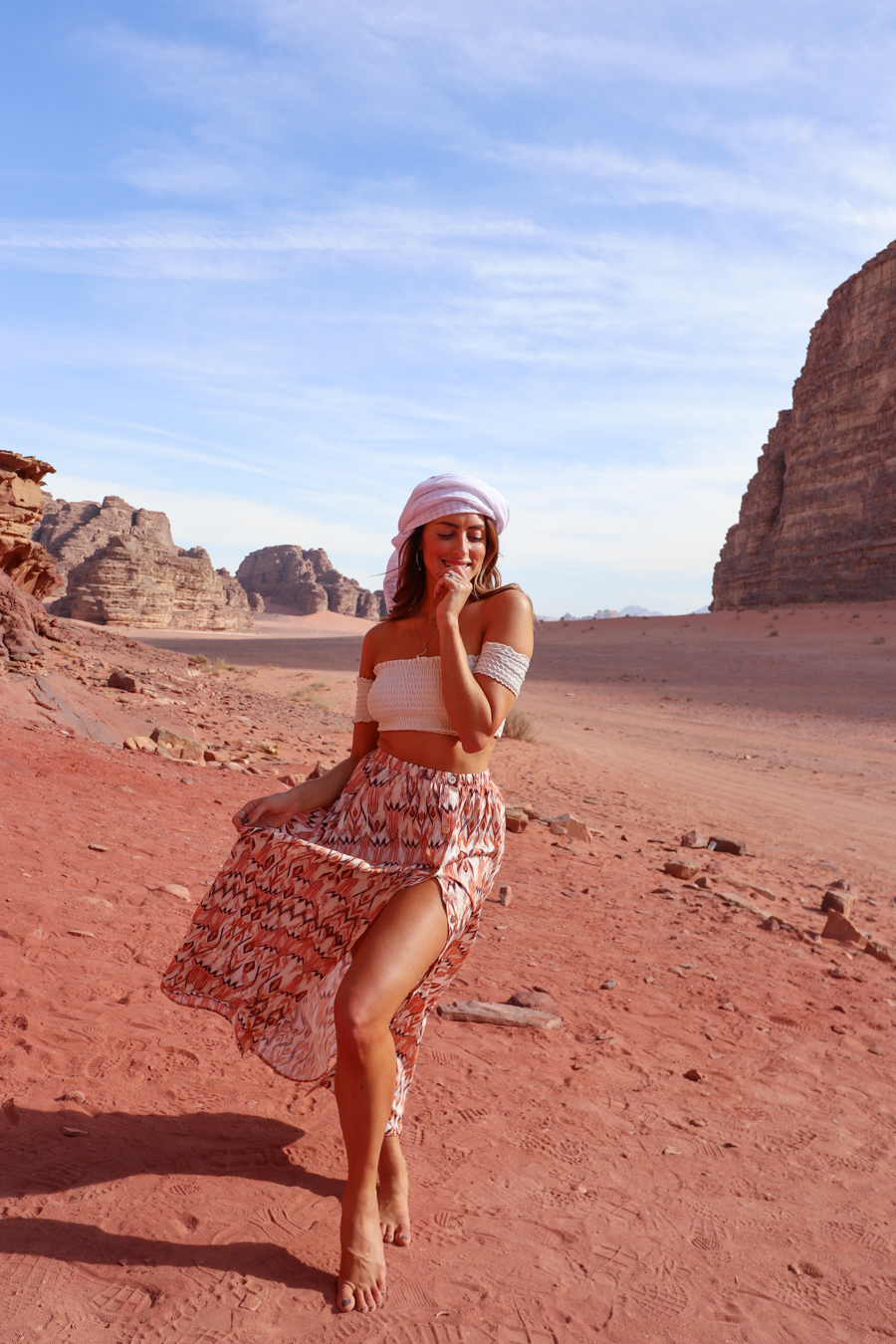 Our next destination would be closer to the main event of Jordan, the world wonder of Petra. Something that wasn’t made easily accessible or clear to me when booking our trip was if we would be able to fit in a trip to The Wadi Rum Desert as well as Petra itself. With our tight ‘long weekend’ schedule I had counted out staying over night in Wadi Rum in favour of our chosen Petra Accommodation so I thought it would be a place we would have to miss out on all together but in fact, Wadi Rum is (minus a small 30 minute or so detour) actually on the way to Petra. So there was, luckily, an opportunity to do both!

We hired a private driver to take us from our Dead Sea hotel all the way through to our second accommodation in Petra and we simply asked him if he was able to stop along the way in Wadi Rum. This was to him, as easy to arrange as for us to offer a house guest a cup of tea! He booked us in for a three hour jeep tour of the desert and included the detour in the price of the full drive. To hire a driver from The Dead Sea to Petra costs between £110-£170 depending on the level of luxury you require, driving via Wadi Rum will set you back an extra £35-£50. 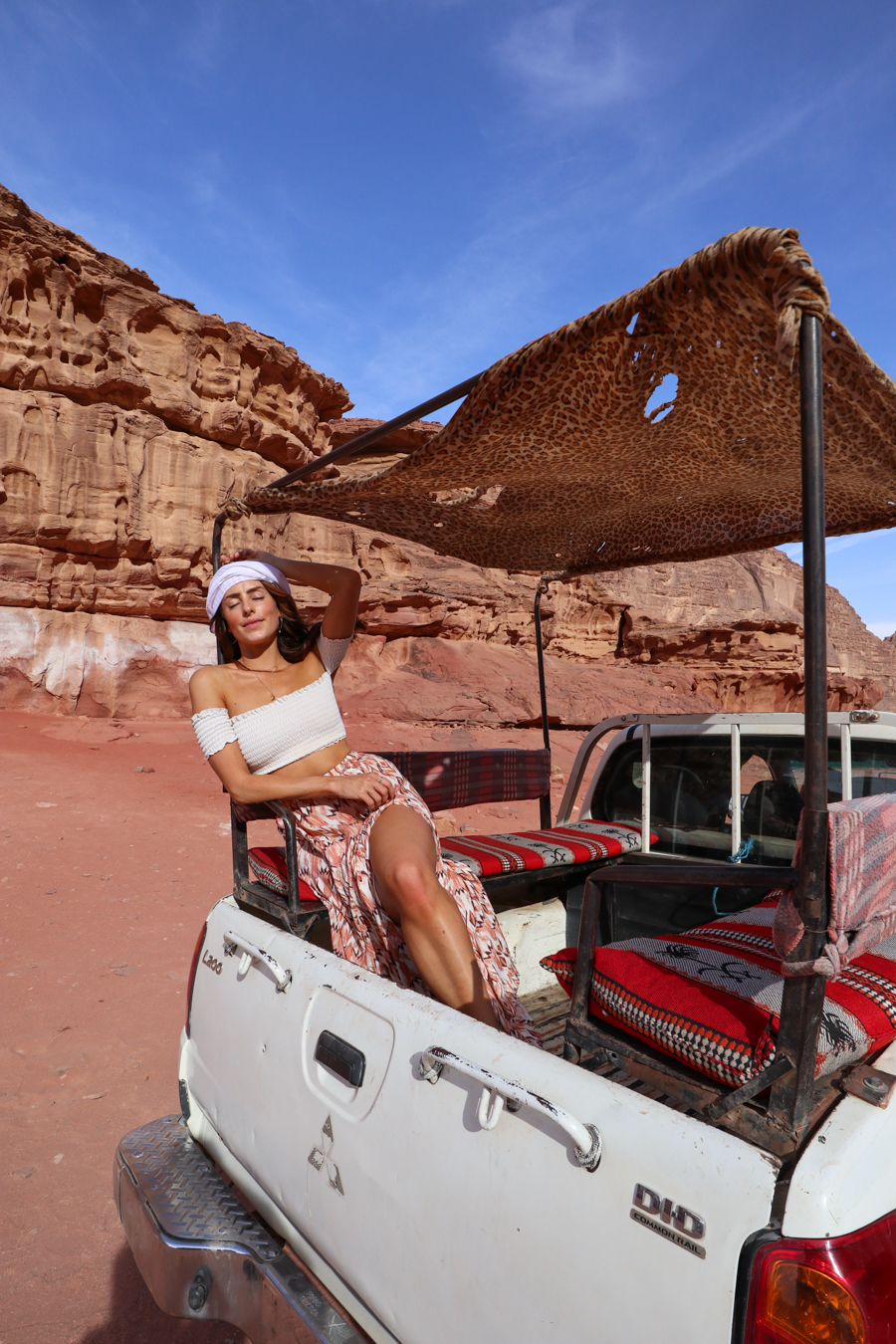 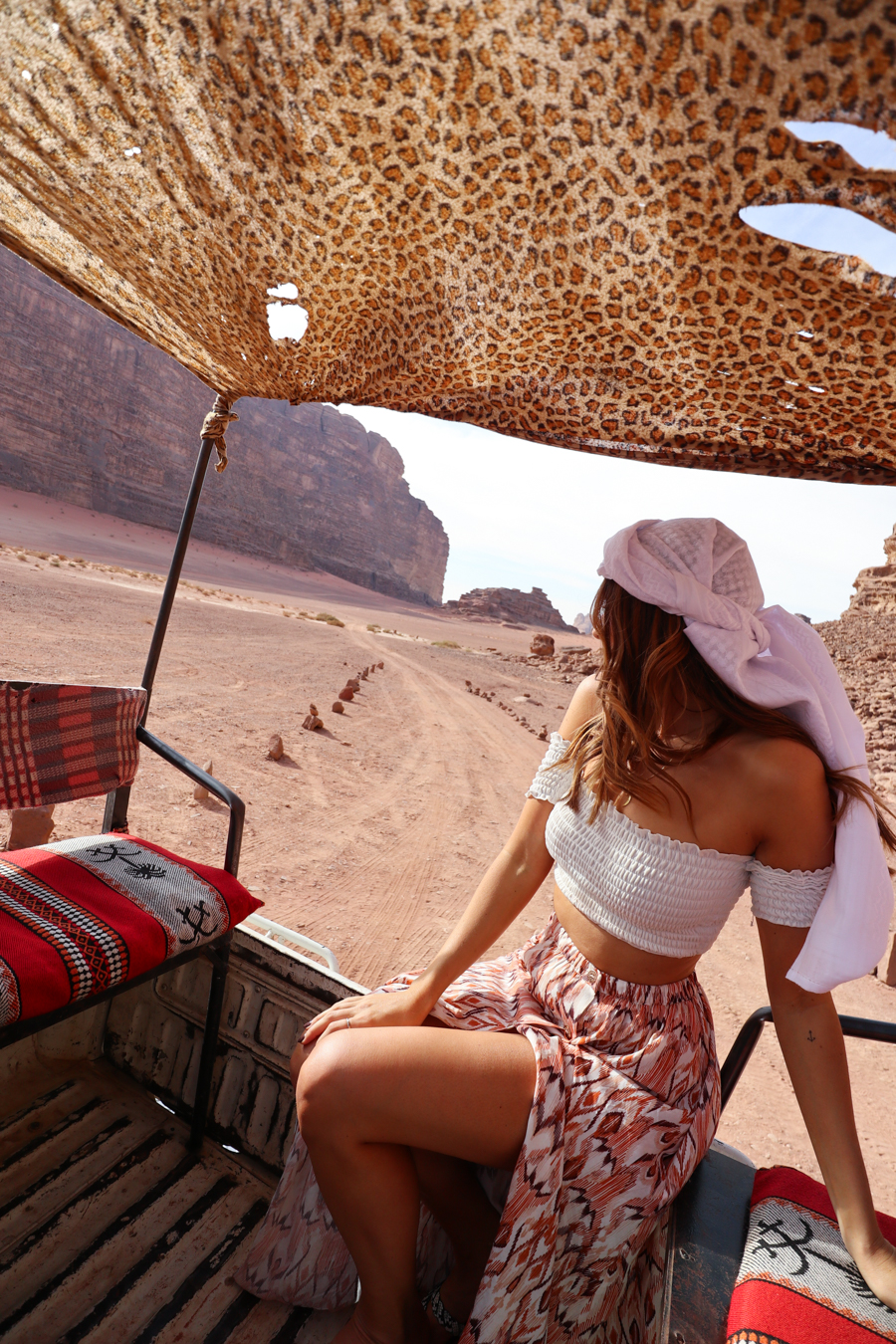 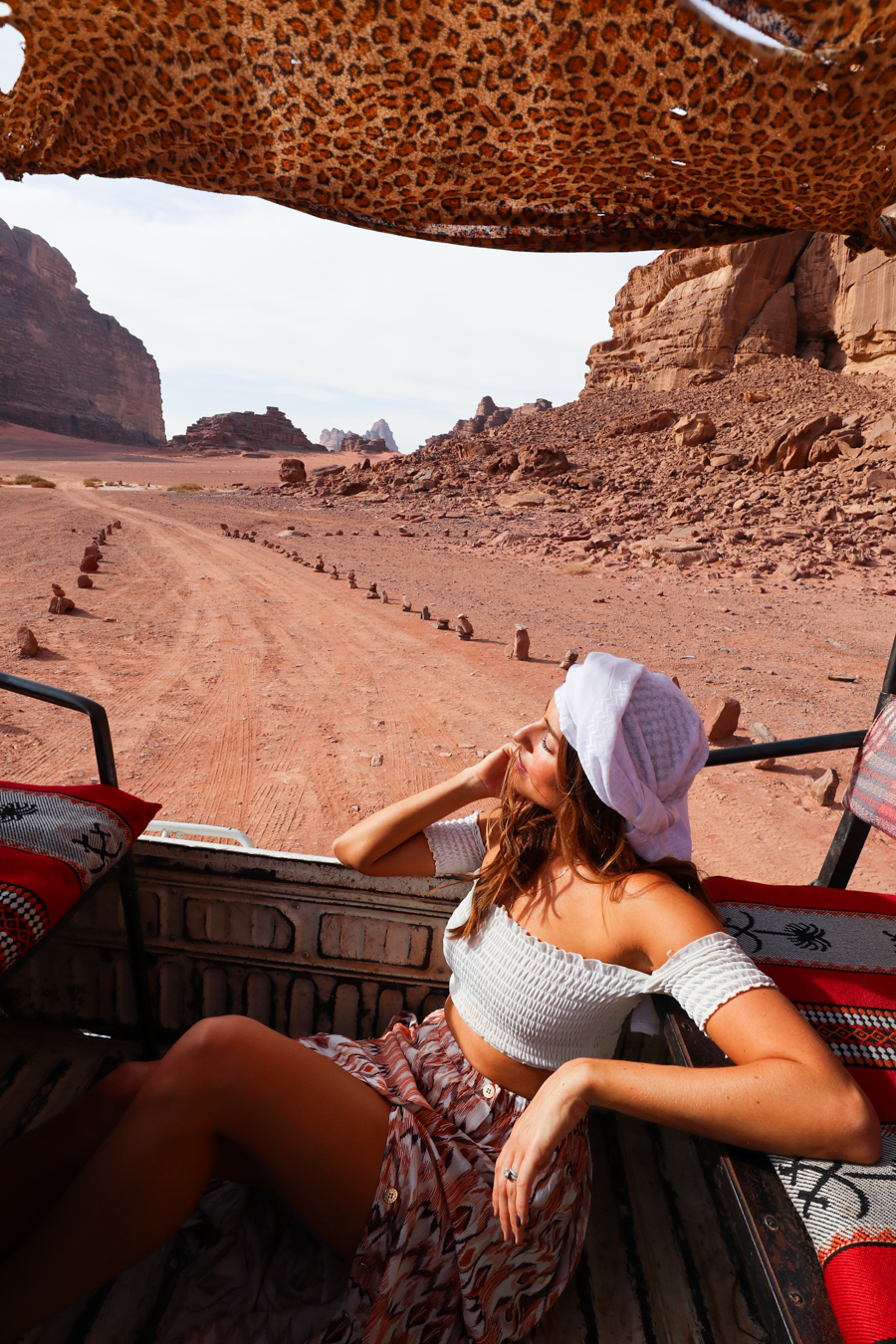 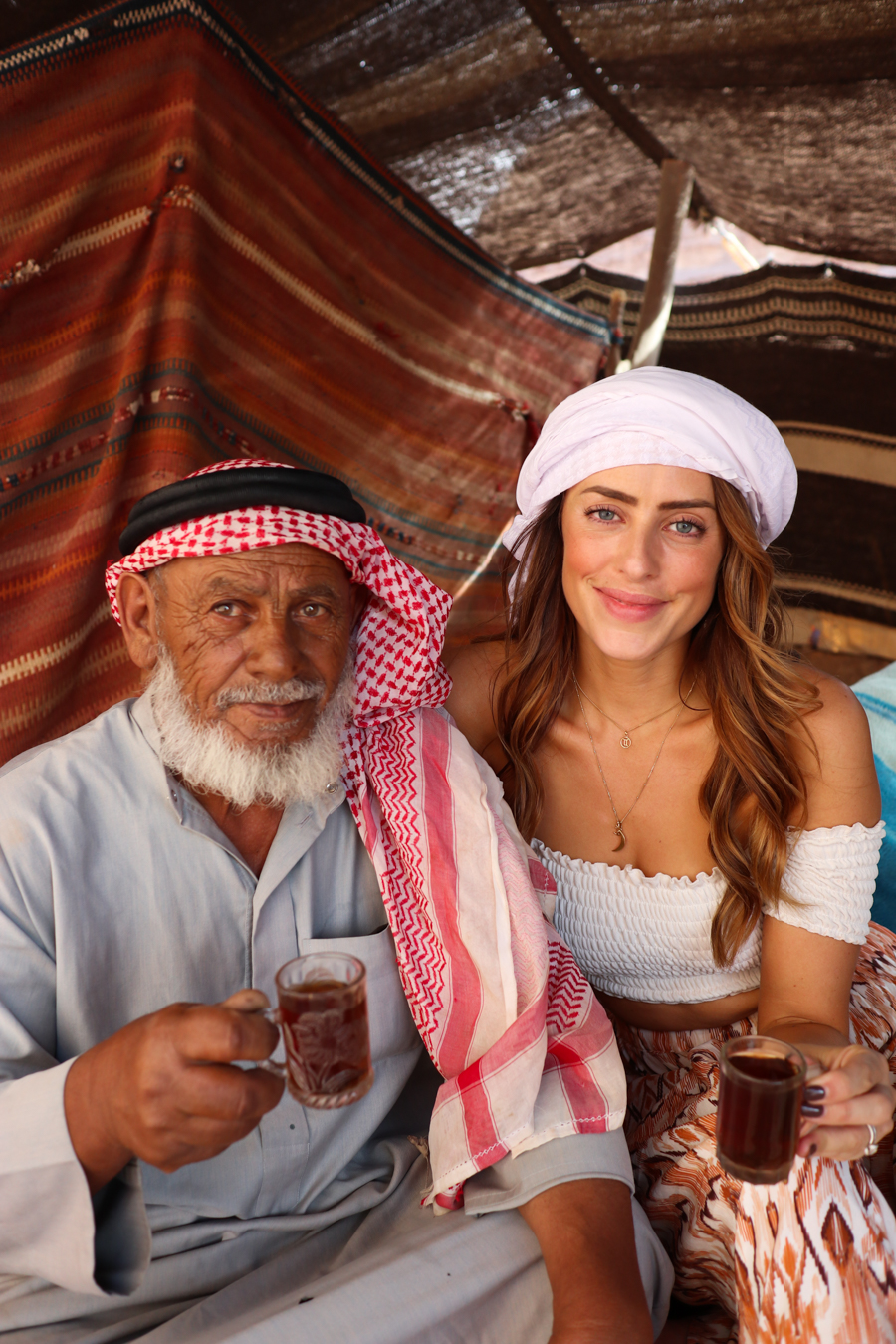 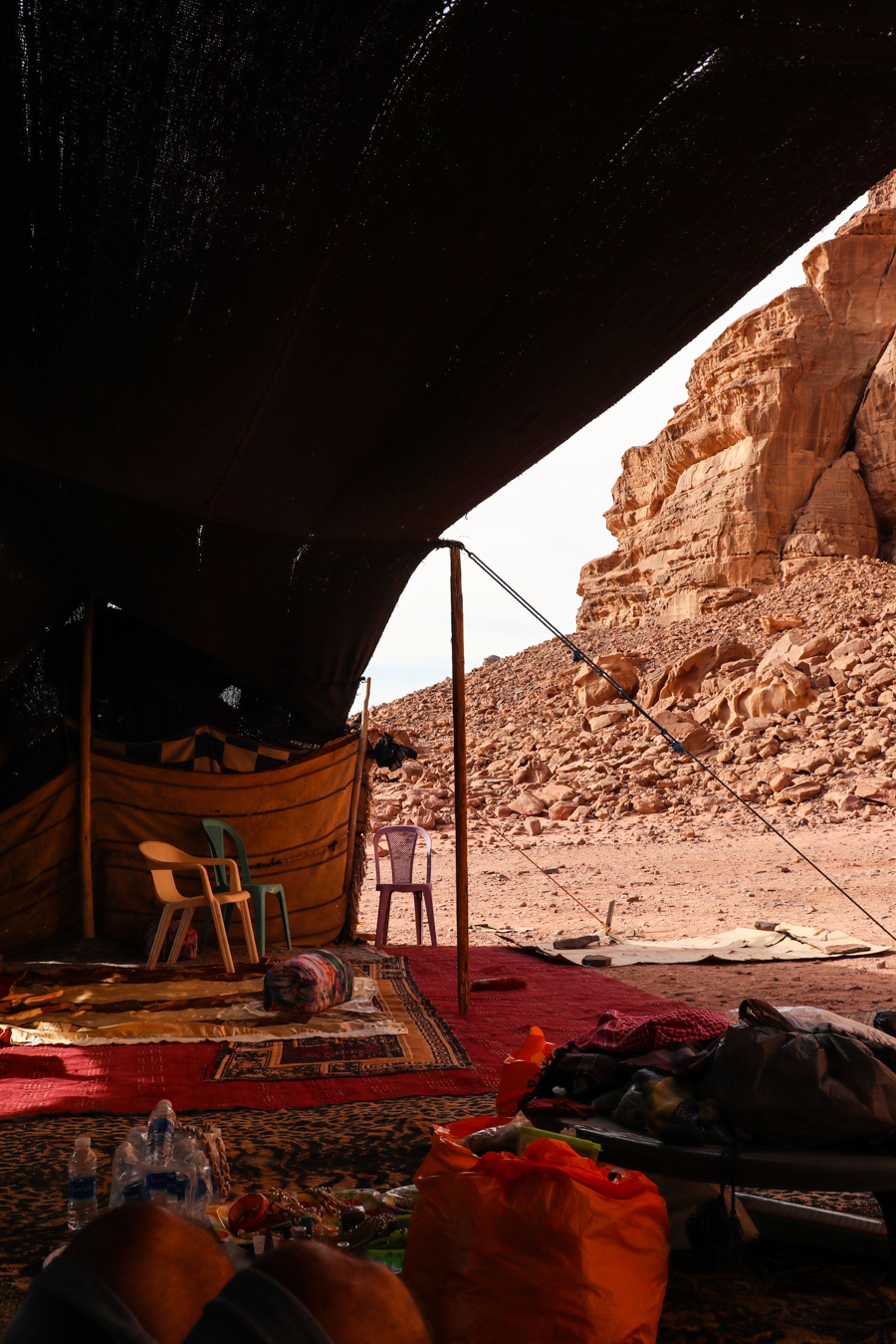 On arrival in Wadi Rum our hotel driver detoured down a sandy path (in what seemed like the middle of nowhere) and we switched up our sleek Mercedes for a dusty white, open-top jeep to take us further into the huge expanse of red sand before us.

Wadi Rum is phenomenal to see, dunes and rock formations that just don’t exist anywhere else in the world and sand so soft and warm that rolling round in it is somewhat mandatory! The drive through invites you into a what feels like a whole other existence and should your jeep arrange it (I’m sure they all do!) you can sit and have some surprisingly refreshing hot tea with some of the local bedouins. Sitting and sipping in the silence, overlooking the unique expanse of desert is a grounding yet awe-inspiring experience. 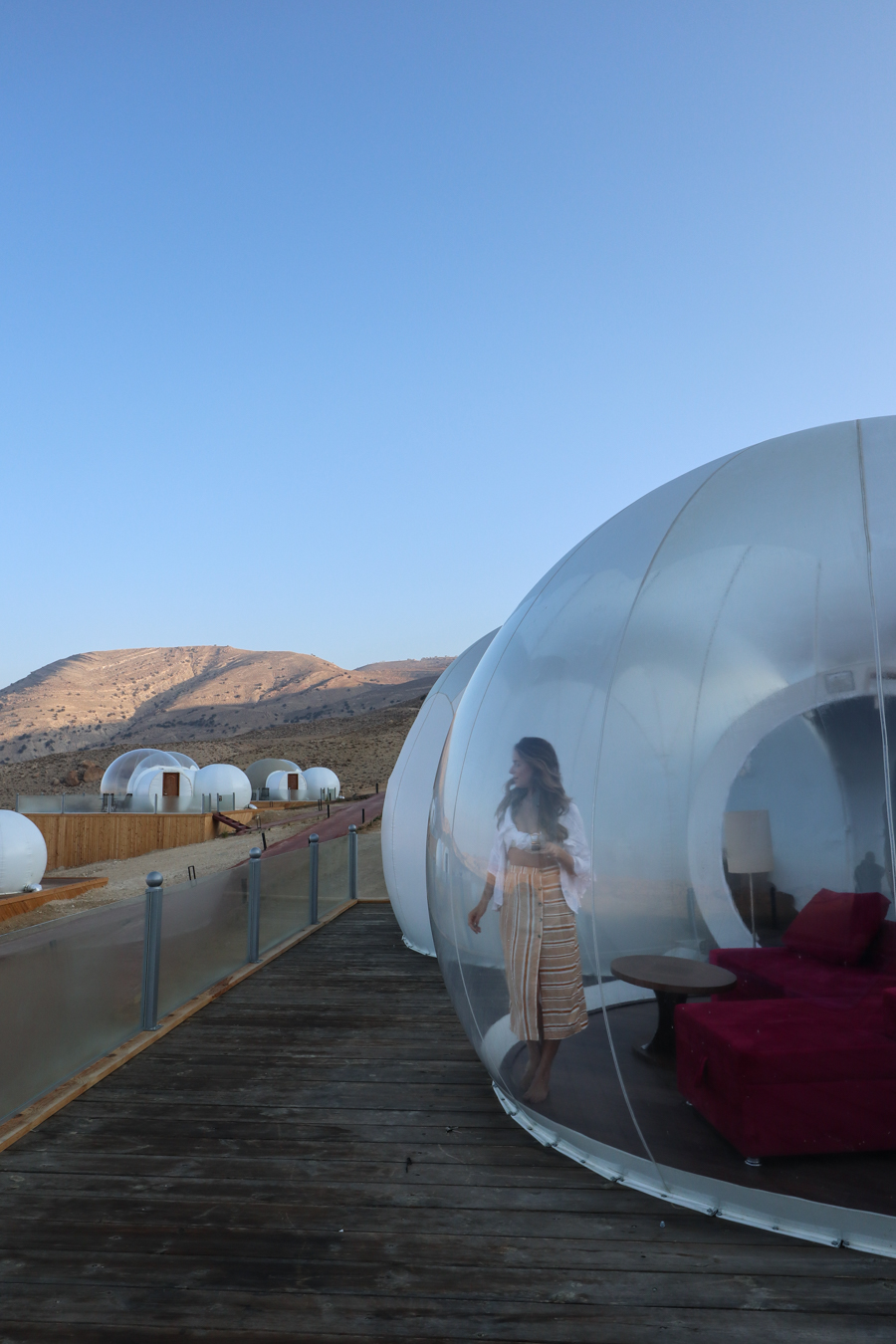 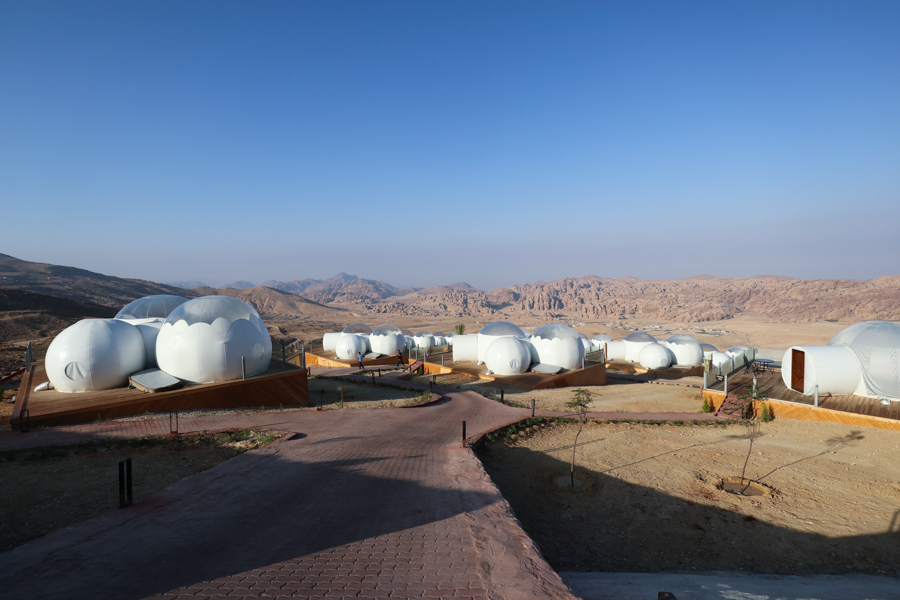 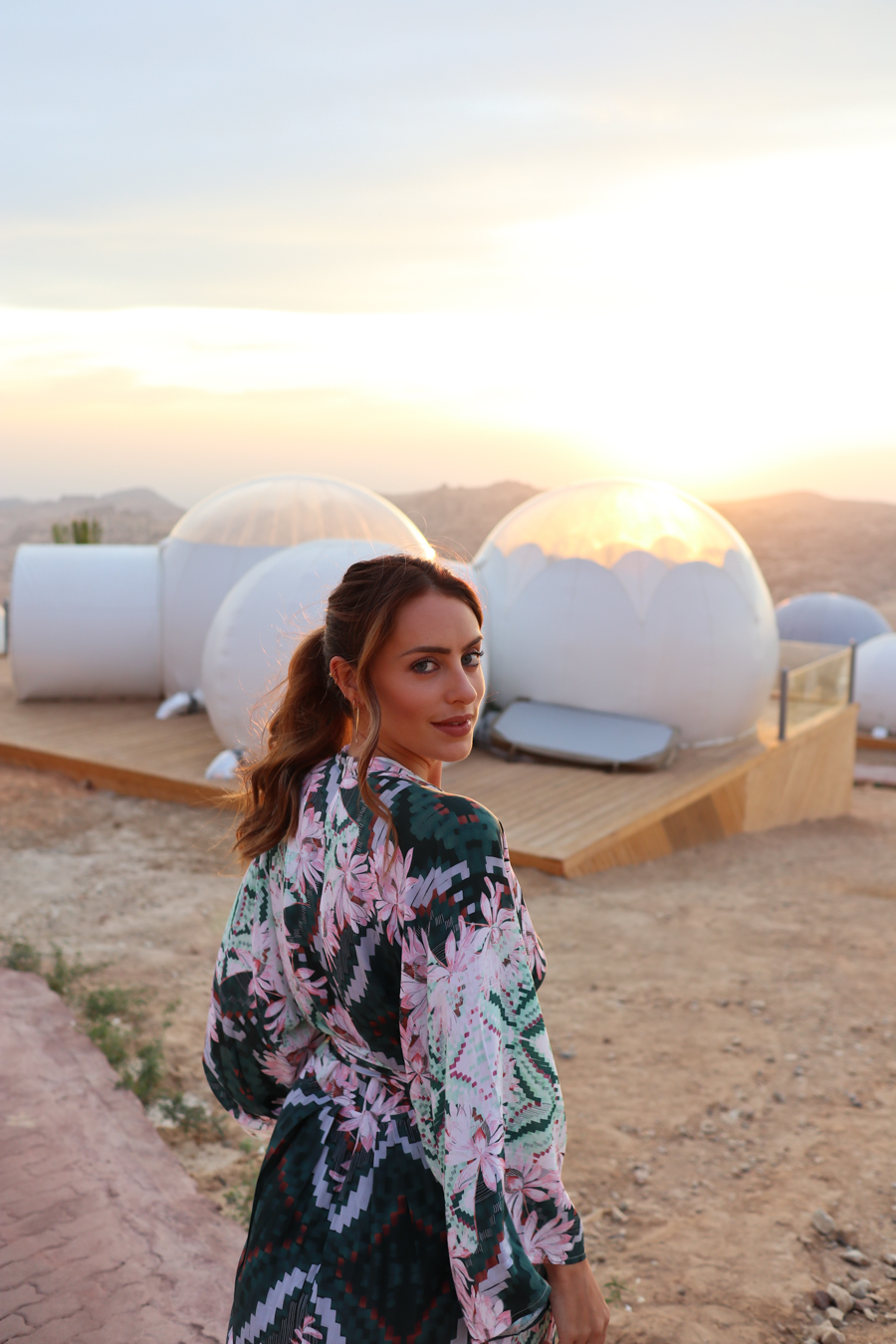 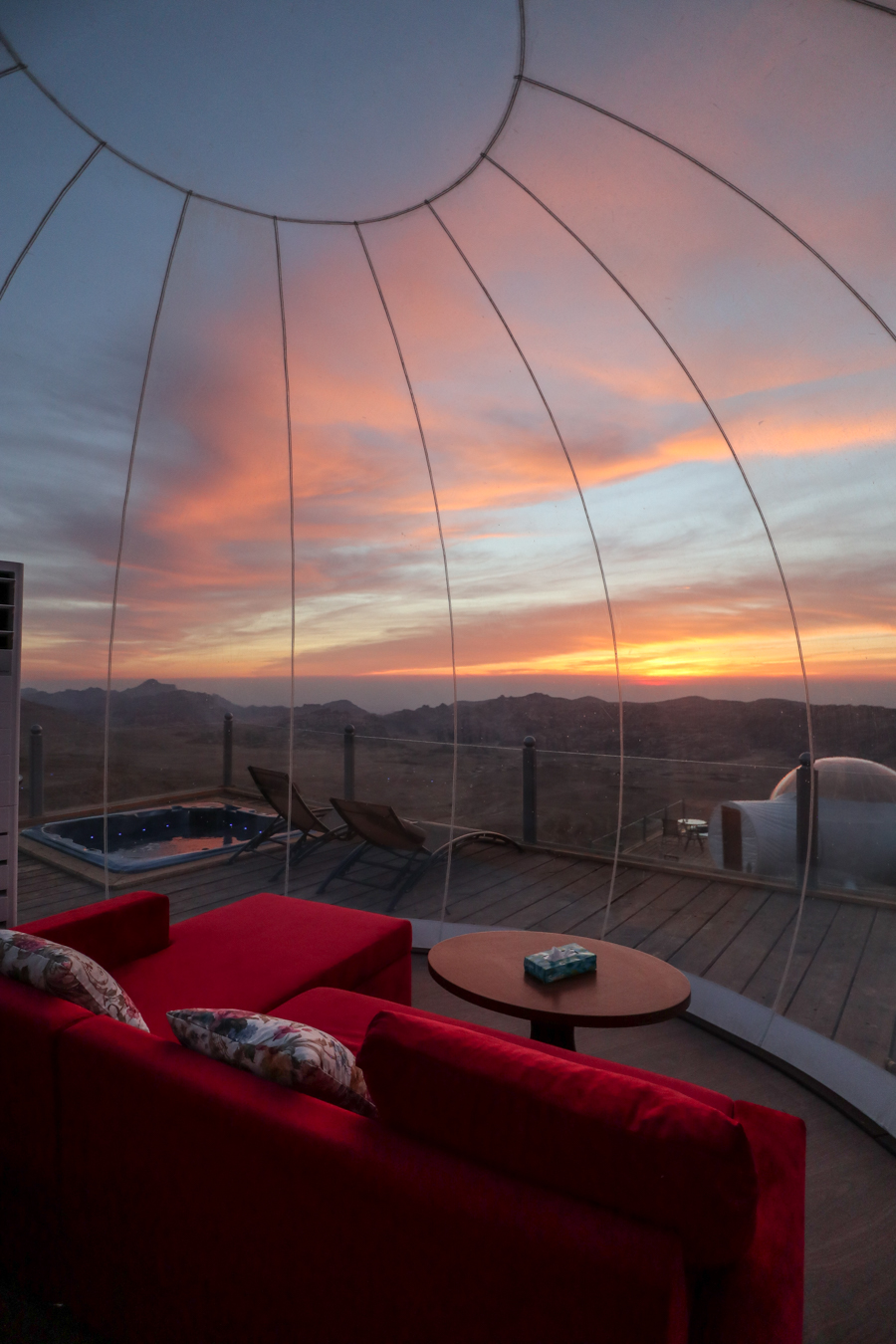 After Wadi Rum we drove to our accommodation in Petra which was about forty fives minutes from where we took the jeep safari and driving on the Kingsway, we had an amazing view for the duration of the drive.

We stayed in none other than the brand new, incredibly unique Petra Bubble Hotel and it was a dream stay we never even knew possible! I’ve written a full review of this hotel here, so for everything you need to know (or if you need more than this selection of pictures to convince you) take a look. 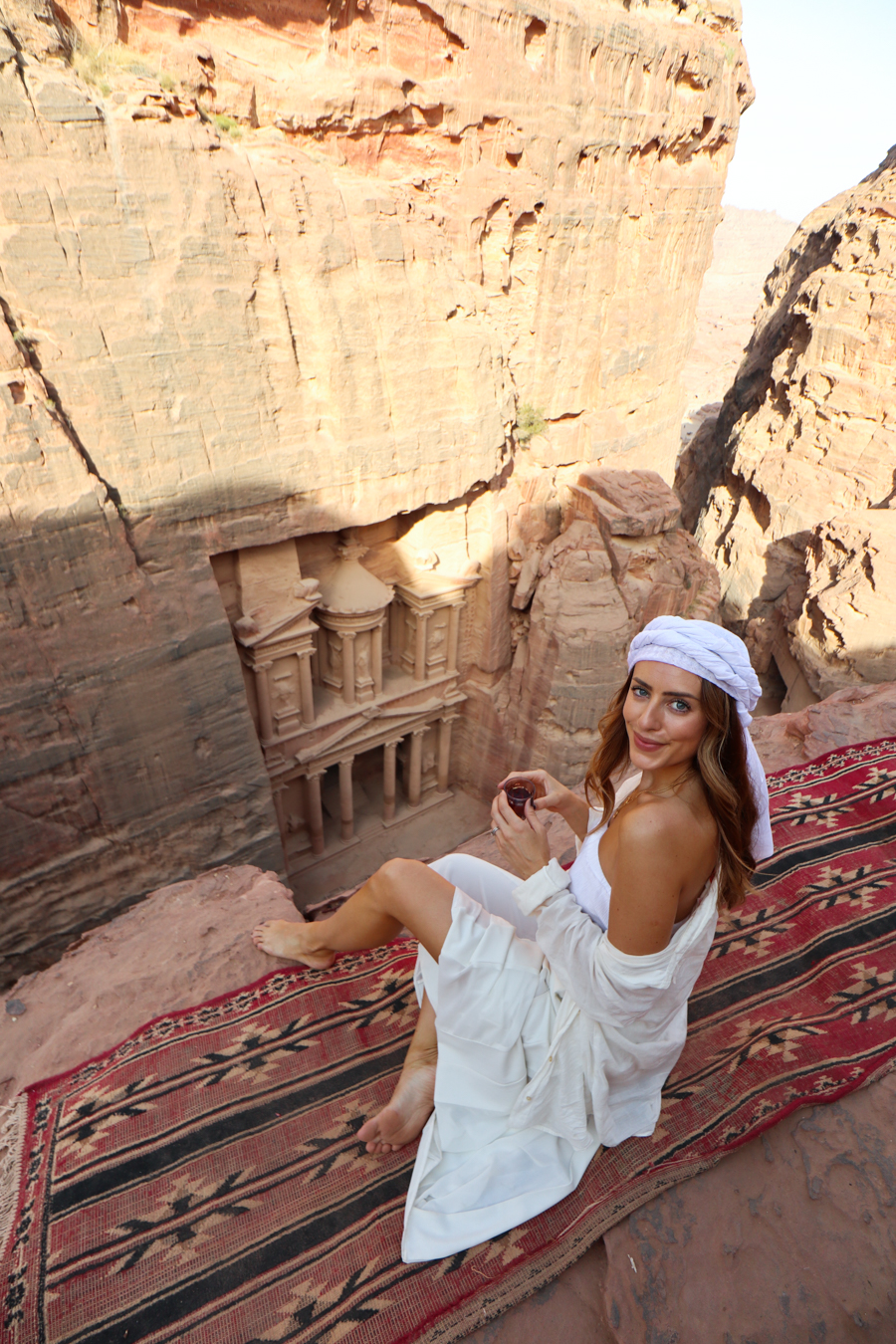 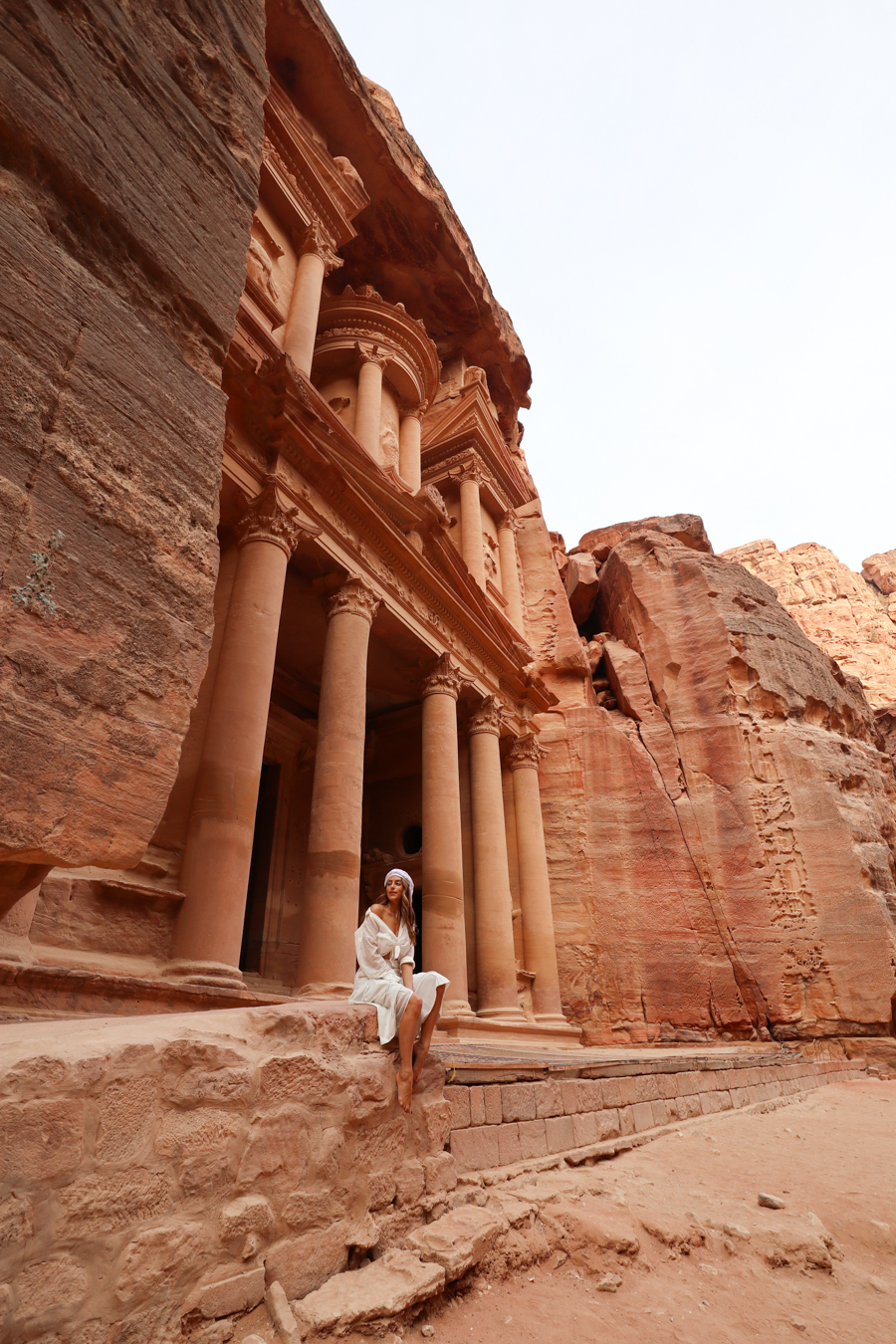 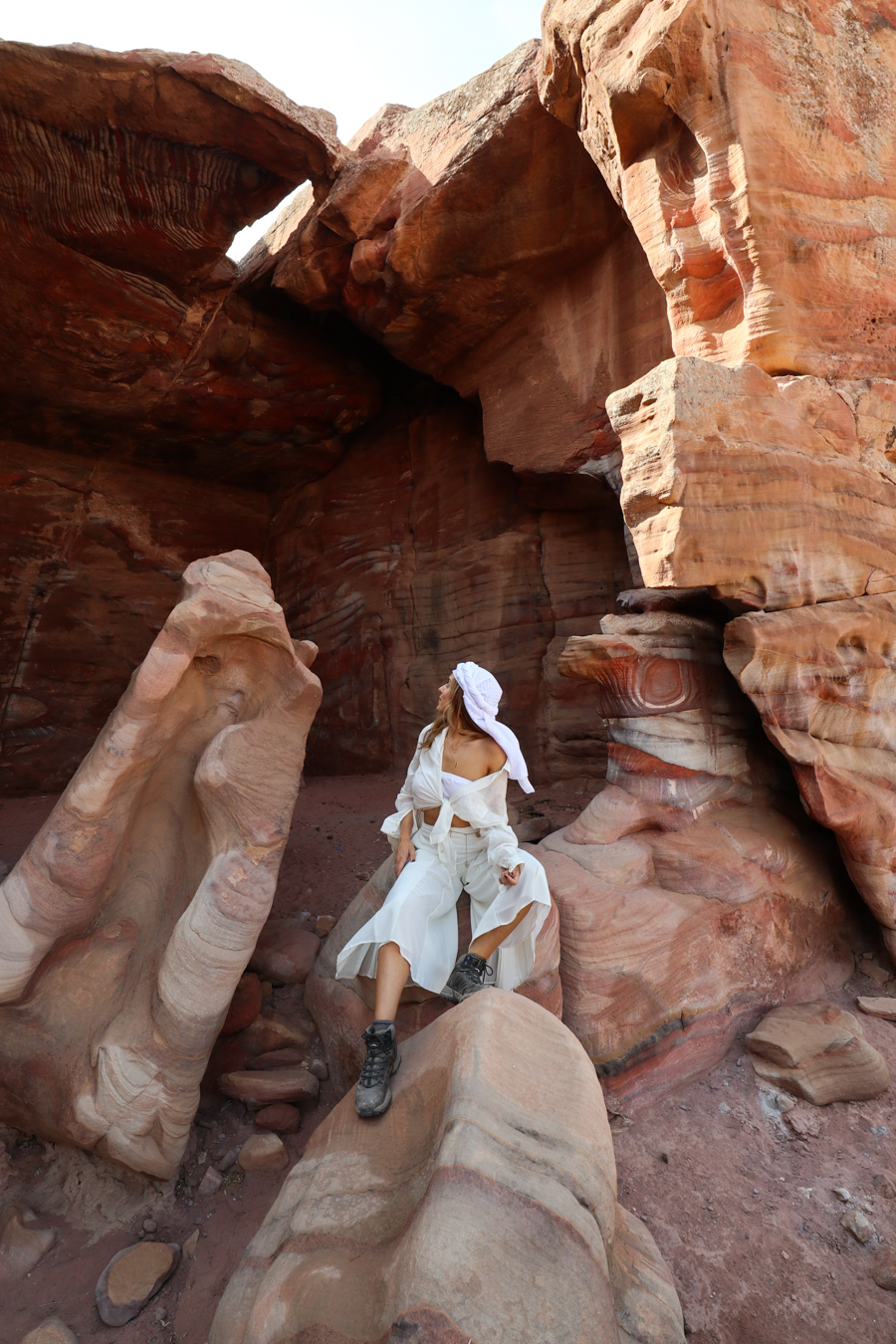 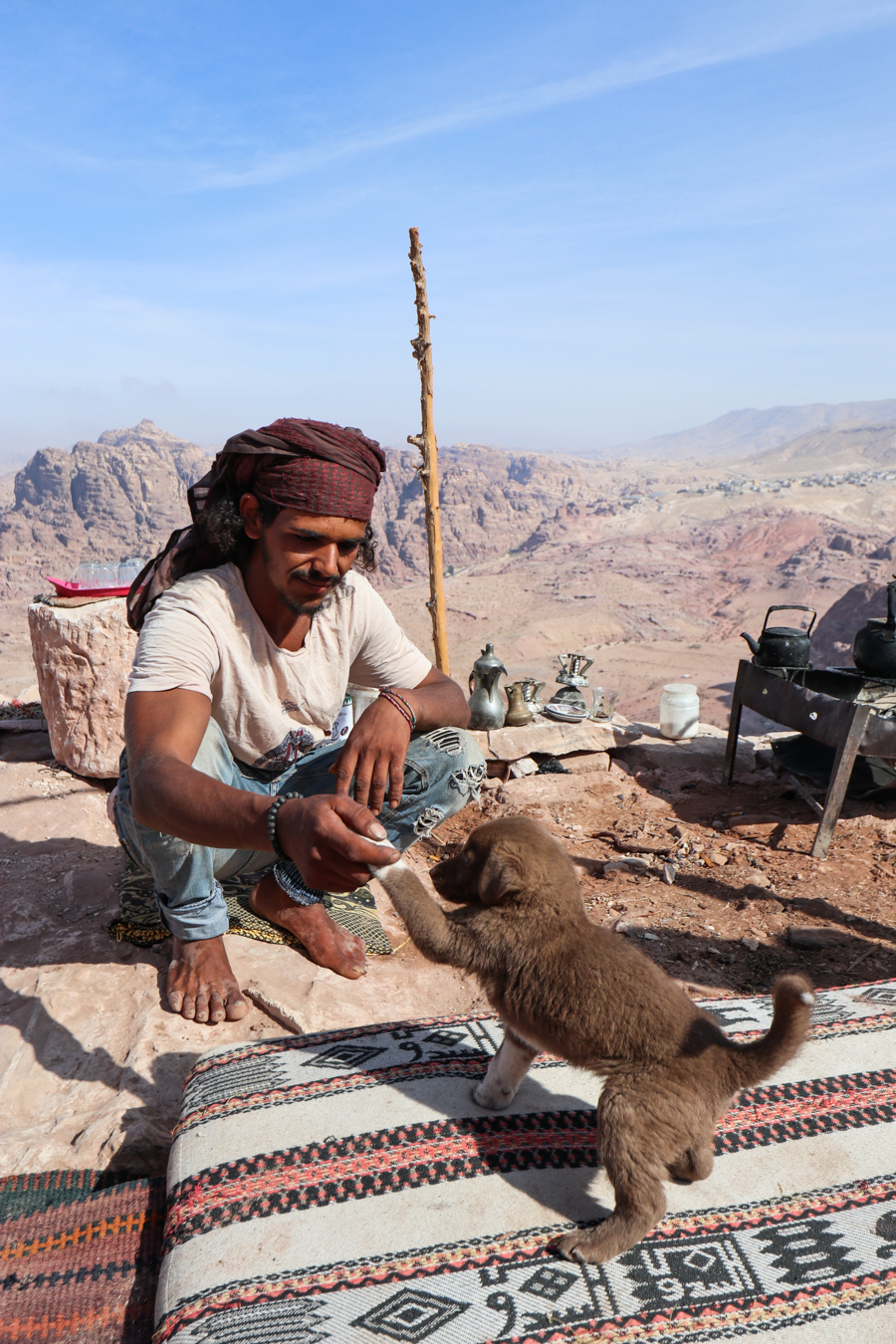 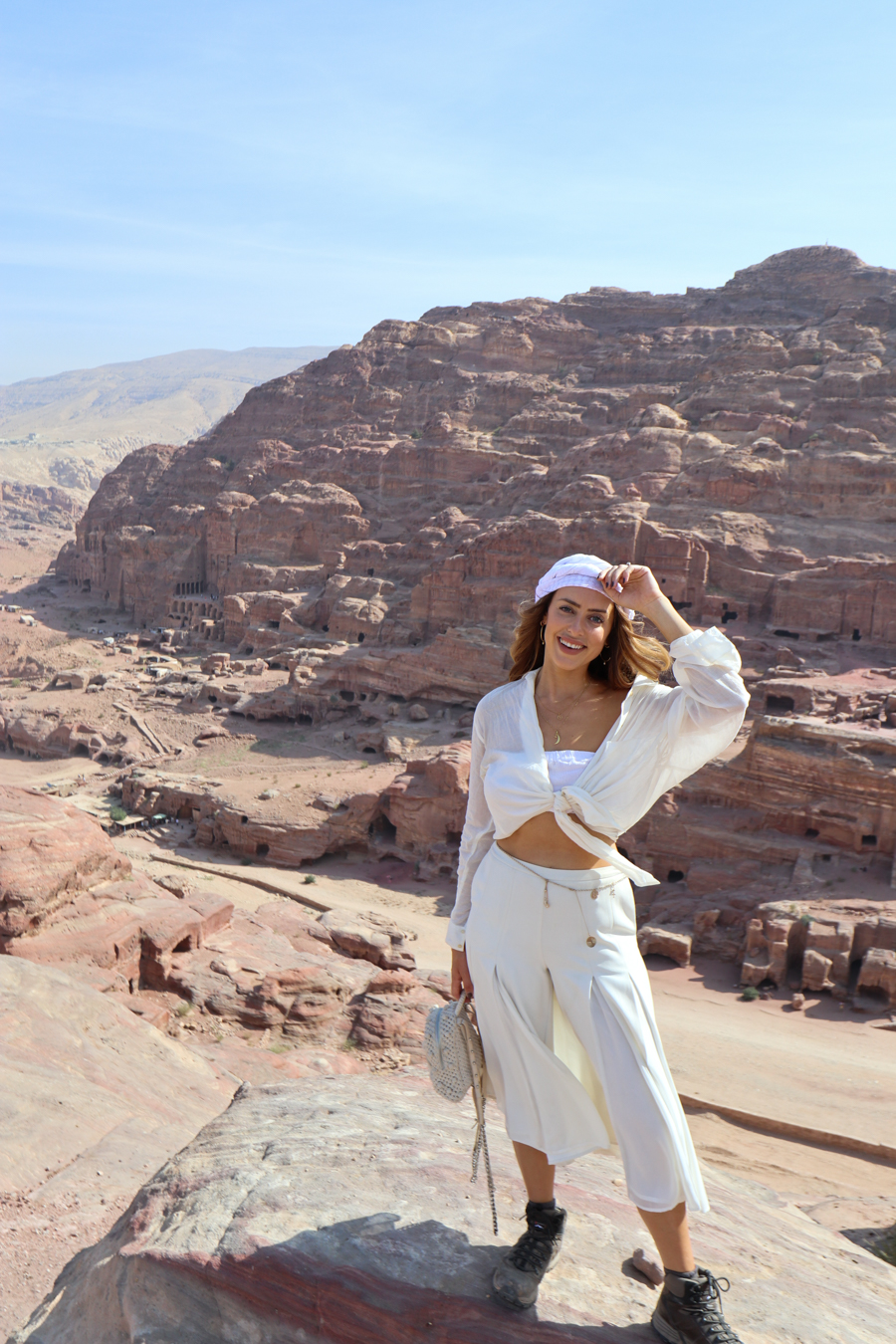 Petra itself is Jordan’s main draw for wandering explorers and it’s been that way for hundreds of years, the ‘Lost City’ that has lent a hand to create iconic film backdrops and world renewed art-work still stands as one of the most spectacularly sought-after sights in the world.

Arriving early is key for exploring Petra for two reasons, the obvious influx of crowds that you’ll beat to the best views but also the more notable desert heat that reaches immense heights in the afternoon most of the year-round. There’s a whole lot of walking to be done in Petra especially if you want to see it all so managing your time is vital when planning a visit. The views over the mountainous range in front of our bubble hotel was worth rising with the sun for anyway so we had no issues arriving early to the main Petra entrance gates.

You pay a fee at the information desk to enter the ‘attraction’ and that ticket can also allow you to gain access to other sites such as little Petra but we didn’t prioritise our time to see anything other than the main city. You are offered a standard ticket fee or one with a guide which is about £50 more expensive. We opted just for the entry fee only but when we were walking round the site (as with most heavily populated tourist areas) there was a number of guides offering their services. We actually took one of the bedouin guides up on their offer to climb (very dangerously I might add!) to the heights of the city and look down over it all. The route we took is quite a common one for the bedouins and I loved adding the trail to our itinerary as we saw more of the city than I even knew existed. The vast landscape is so varied and the colours and formations are out of this world. I’ll be writing a full blog post about Jordan Travel Tips but one that’s a case in point for Petra is, if you want to explore outside of the common flat routes you need to make sure you are wearing sturdy shoes with ankle support and serious grip! 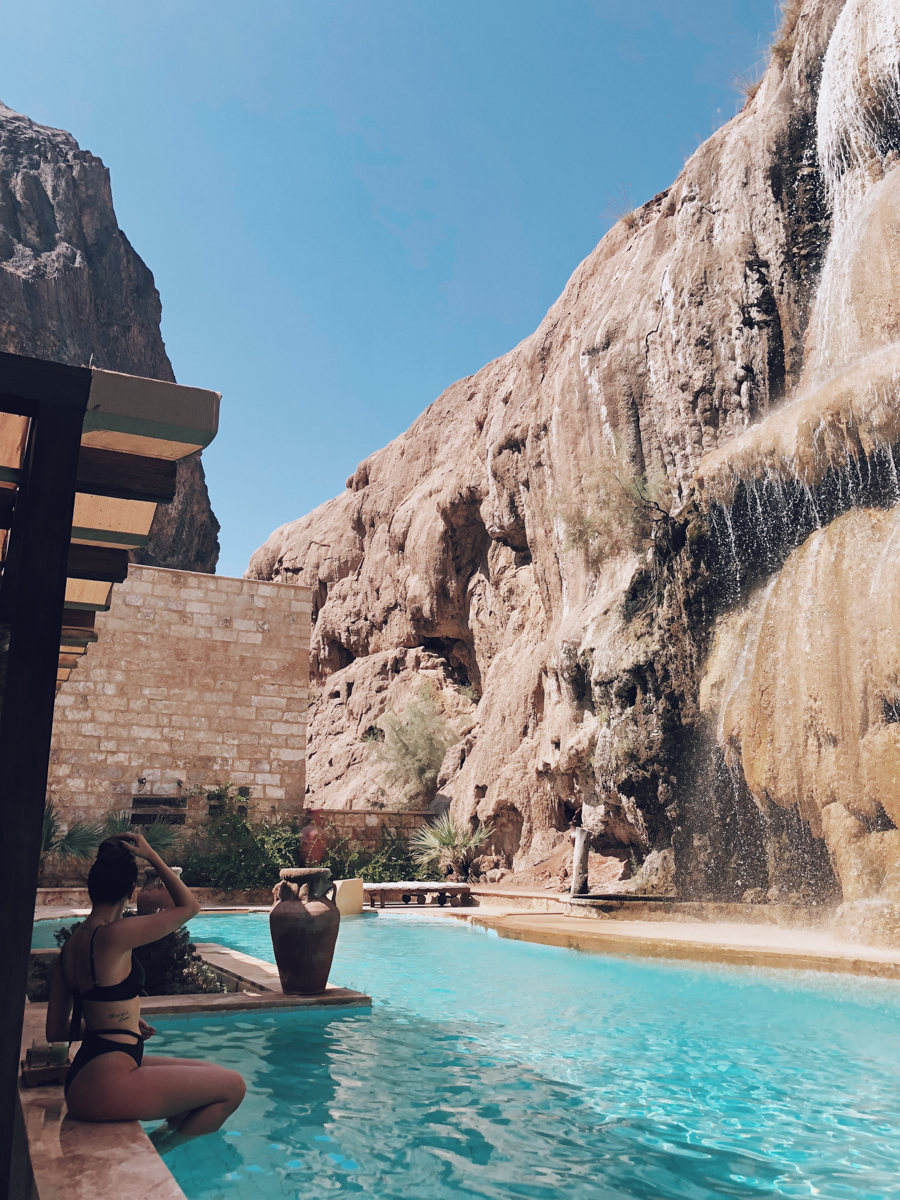 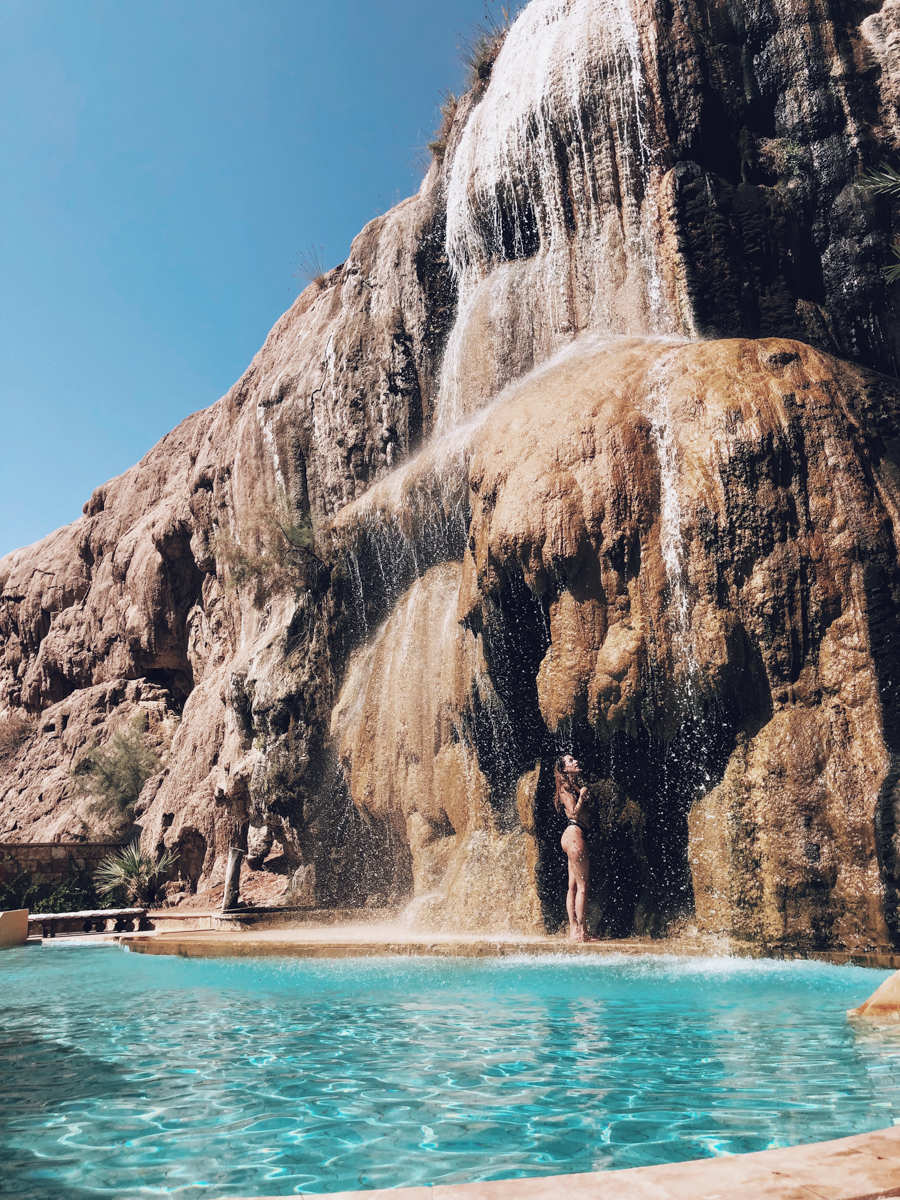 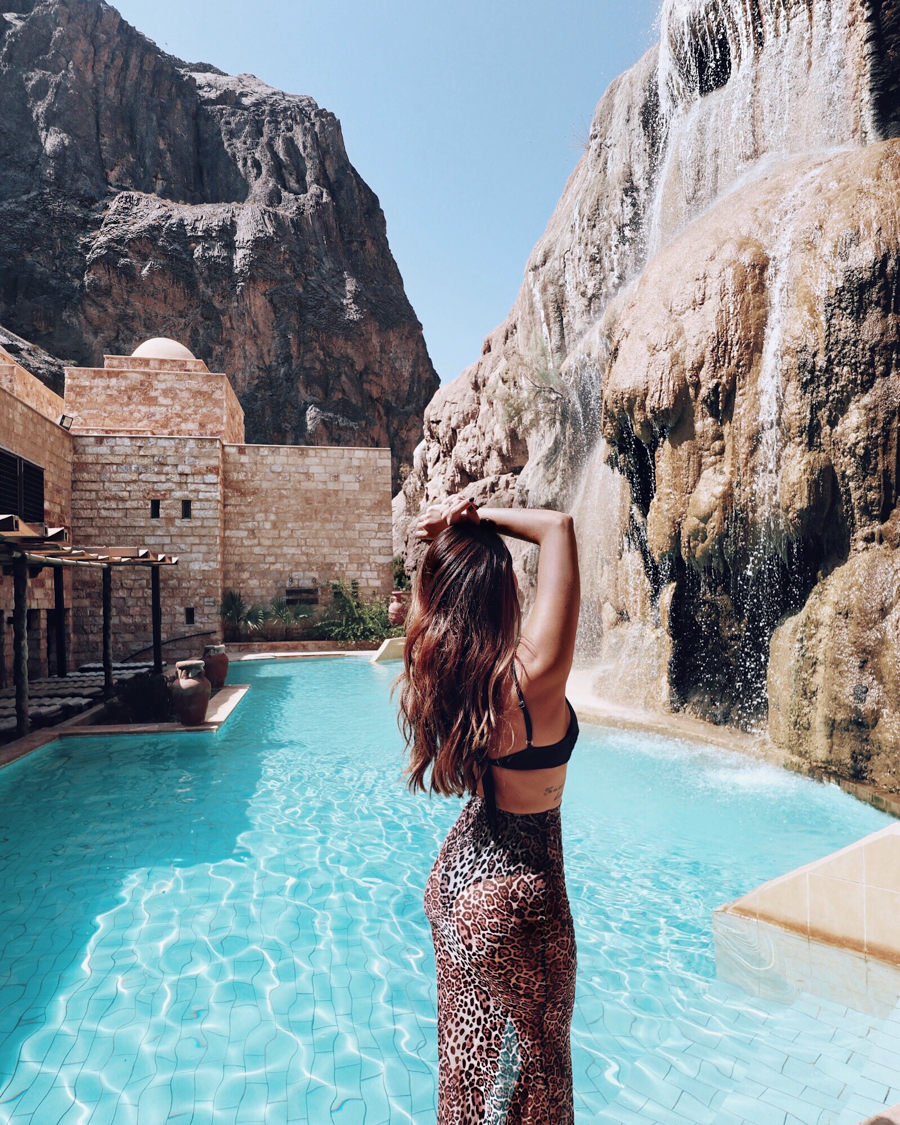 After spending a couple of days in the wonderland of Petra it’s time to head back up towards the airport, bypassing The Dead Sea itself but overlooking it from the drive round all the same. For the final day in this short trip to Jordan I wold highly recommend heading to the beautifully tucked away Ma’in Hot Springs. The completely natural waterfalls and hot water sources are another one of Jordan’s unique displays from nature to enjoy and benefit from both physically and mentally. As with the Dead Sea the hot springs are full of natural goodness and attract tourists year round because of their soothing and healing properties.

For a truly divine experience stay at the resort itself and book into the Six Senses Spa for a rejuvenation day you won’t forget soon after! The spa is gorgeous with it’s very own naturally sourced hot water source which creates a stunning (yet scorching) swimming pool. The heat radiates off the water and with the sound of the waterfalls combined with the warmth and comfort of the daybeds you struggle not to drift off into dreamland within seconds of lying down! Mr C & I also booked in for some treatments whilst we were at the spa which was the absolute perfect way to end the trip!